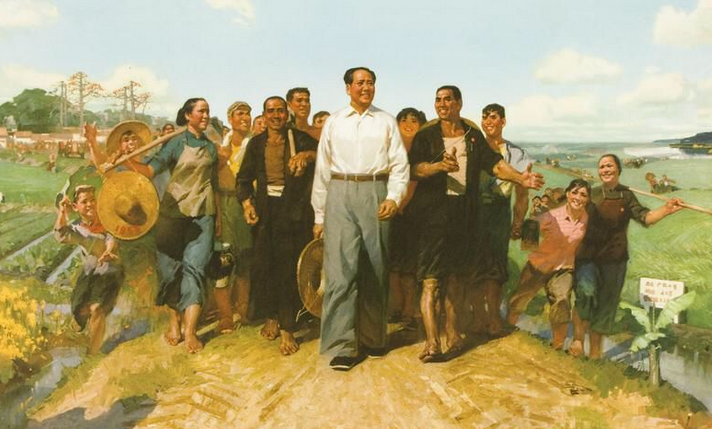 Brian DeMare is a cultural historian and teacher of modern Chinese history at Tulane University in New Orleans. His first book, Mao’s Cultural Army (2015), found the cultural revolution “to be a profoundly theatrical event”. It was also a profoundly murderous event and DeMare’s second book,  Land Wars, this time on Mao’s agrarian revolution, depicts similar excesses but does not sufficiently condemn them for what they were: a politically self-serving democide of the Party’s potential opposition in the villages of rural China.

Coined by Professor R.J. Rummel, whose research provides voluminous statistics on governmental killing, the word democide involves acts of genocide, politicide and mass murder. By necessity, the self-protective despotism of communist one-party rule entailed all three of them. While DeMare’s narrative does little to emphasise this point explicitly, his recounting of the Maoist bastardry which savaged rural China will do much to support that contention.

DeMare foregrounds Mao’s intuitive conviction that the Chinese peasantry could make or break the revolution, and DeMare’s varied researches and narrative style make Land Wars a highly informative and readable account of how a communist mastermind artificially induced an agrarian revolution. “Historians,” writes DeMare, “must engage Mao’s narrative of revolution in order to understand what truly occurred in rural China as the Communists came to power.”

The central theme of Land Wars is that Mao’s peasant revolution was a fantasy, a fiction which the Party’s “work teams” were commanded to convert into reality. While DeMare effectively “deconstructs and questions Mao’s narrative”, he simultaneously and mysteriously manages to affirm its reification. DeMare provides abundant and horrifying evidence that China’s agrarian revolution is, as he says himself, “nothing to be lionised” and yet despite a painstaking litany of revolutionary deceit, human rights abuses, theft, slaughter and rapine, he finds the overall results unworthy of “wholesale denunciation”.

Tellingly, perhaps, the only explicit condemnation in the book is delivered not against Mao but against China’s current premier, Xi Jinping, who has departed from the agrarian agenda of the Maoist era but “insists in clinging to Mao’s revolutionary narrative to bolster his party’s legitimacy”. Mao did no less himself and for similarly defensive purposes. As DeMare points out, Mao’s Orwellian “narrative” was reified through systematic violence as the communists “came to power” ironically and in part through grotesque processes of wholesale denunciation which the author honestly describes but cannot bring himself to condemn entirely.

The longevity of the revolution was by no means guaranteed, nor did it enjoy monolithic support amongst the peasantry—and thereby hangs DeMare’s tale. Mao was acutely aware of the dangerous potential inherent in what General Giap in North Vietnam referred to as “the peasant question”. And while DeMare does not suggest it was naked political self-interest which sent Mao’s travelling democide circus to the countryside, he does inform us of a revealing Maoist trope: the hurricane. Mao’s imaginary peasant “hurricane” was personified with a militant and revolutionary peasant consciousness, but DeMare makes clear this was a fantasy. “In reality,” he writes, “rural China was an expansive and endlessly diverse place and it stubbornly resisted any simple characterisation.”

This stubborn rural resistance to communism’s narrative simplicity lies at the heart of that vexing “peasant question” and the ruthlessly Orwellian methodology used by Mao (and, subsequently, Ho Chi Minh) to answer it. Were it otherwise, there would have been no need for agrarian circus troupes of indoctrinated thugs, communist clowns and acrobatic “urban intellectuals” to convert Mao’s “grand narrative” into a gruesome revolutionary fact.

DeMare notes that in 1950 in Guizhou province the Party was beaten out of twenty-eight counties and unable to beat its way back in again until the following year. In some earlier attempts at land reform, in 1927, “redistribution” was initiated only after “the Red Army opened fire on the villagers”. Mao warned, writes DeMare, that if his “comrades did not flock to the countryside to lead the peasantry … they would find themselves smashed under foot”. In short, the Party must induce the anticipated “hurricane” and ride upon its fearsome violence or succumb to it.

According to DeMare, and despite appalling instances of feudalistic abuse and poverty, “many villages lacked true examples of economic exploitation”. Where dastardly feudal landlords could not be found, they were invented and innocent men and their families were unjustly and brutally punished. To achieve this, Mao specifically empowered the poorest and most disaffected elements of Chinese rural society. After a thorough indoctrination by communist “work teams”, cadres of this calibre were unleashed upon their fellow citizens and neighbours in villages across China.

DeMare tells us of Party members who were personally repelled and disquieted by Mao’s “insistence” on employing the scum of the good Chinese earth. In the opinion of one official: “These men had revolutionary potential but were also quite ‘destructive’; they gambled, took liberties with women, and tended towards violence.” But surely if one intends to generate a “hurricane” of class-hate and rapine, this is precisely the sort of chap one needs.

It is difficult to imagine that Mao’s empowerment of these “destructive” men was unpremeditated. Communists in whom some residual shreds of sanity and rectitude remained did well to be “repulsed” and “concerned”, and yet these worthies reified Mao’s democidal narrative in the countryside and failed to recognise the greater evil inherent in a revolution which was as counterfeit as the disaffected hoodlums who conducted it at Mao’s “insistence”.

Nevertheless, the reservations of Mao’s critics in the Party are as valuable as they are revealing. DeMare cites Xi Zhongxun (the father of the current premier of China) who was keenly aware of what he called the “complex” nature of even the poorest of the peasant class: “Some are poor because they love to eat, drink, go whoring, gamble, or don’t want to work.” While DeMare showcases earnest Party officials such as Xi as examples of communist moderation and ideological purity, they still subordinated themselves and their integrity to the ideology which produced and empowered Stalin, Mao and Ho Chi Minh.

But perhaps such judgments lie beyond the terms of reference of Land Wars. DeMare is telling us the story and we must make of it what we will. To his credit, he states that many tenant farmers “accepted land-ownership as legitimate: hard work led to prosperity, while lazy farmers sank into poverty”. It was the cadres’ job to persuade them otherwise: that wealth acquired by individual effort was symptomatic of “exploitation” and “injustice”. DeMare has shown how even dedicated disciples of Marxist economic morality conceded villagers may have been quite shrewd in their judgments of disaffectedly impoverished neighbours who were destined, at Mao’s insistence, to become their persecutors.

Land Wars reveals how Mao’s uncanny ability to intuit and manipulate the basest elements of human nature in peasant society triumphed over moral common sense. “Ideology now trumped reality,” writes DeMare, whose narrative has chapters worthy of a Monty Python sketch. Take, for example, the village of Long Bow where the powerless and bewildered villagers (those still alive after the initial rounds of denunciatory violence) were subjected to a series of communist reclassifications and a stunning reversal of policy. The process involved robbing the recently classified rich to give to the recently classified poor who were subsequently reclassified and the property returned to the previously misclassified rich. DeMare’s depiction of this circus of the absurd is impeccable in its clarity.

The purpose of this Maoist farce was to find and redistribute village “wealth”. What was in evidence, however, was an affirmation of Margaret Thatcher’s dictum that “the problem with socialism is that eventually you run out of other people’s money”. Similarly, if you “smash” the social infrastructure of the countryside, you may also run out of other people’s food. DeMare provides a tantalising hint of the self-preservative and pragmatic deceit of Mao and the Party: “To ensure agricultural production, widespread confiscation of property was no longer tolerated.” Note the Orwellian “no longer tolerated”, implying official disapproval of the confiscations which officialdom itself had demanded.

There is an impression of a bureaucratic, socialist psychosis at work here in the village of Long Bow. Consider, for example, how the “local county party secretary” (the Party lineman for the county, if you will) came up with a novel Orwellian resolution of the contradictions experienced in achieving fanshen (liberation) for the village: “The peasants had in fact obtained fanshen even if they did not realise it at the time.” As an example of Maoist doublethink, this surely must be unsurpassed. What it meant, writes DeMare, is that “there was nothing left to redistribute”: game, set and match—Thatcher.

But apart from the devastating economic impact, consider also the profound psychological effect upon the hapless villager experiencing a liberation he did not realise he’d attained through revolution he did not know that he was part of—until Mao’s intellectual acrobats informed him he was leading it! And behind the bloodied curtain of this socialist surrealism and absurdity, the elimination of the Party’s enemies and potential enemies continued apace. Even with the subsequent reining in and scapegoating of the rabble element, the democide proceeded, as it must, to ensure the Party controlled the peasantry as effectively as Mao controlled the Party.

Mao’s subsequent “cultural” revolution exemplifies how this instinct for political self-preservation induced a revolutionary “hurricane” by means of indoctrinated hoodlums seduced by the dark side of the farce and who, as DeMare points out, engaged in the “public explication of evil deeds, the shouting of politically charged rhetoric, and the use of humiliation and violence”. It is a process not unfamiliar to conservative speakers invited to our university campuses. But wherever such outrages occur, they find their origins in the fascism of the Maoist fantasy DeMare painstakingly unveils in Land Wars. “Mao’s Cultural Revolution,” he writes, “furthered the model of struggle perfected in the agrarian revolution, now firmly entrenched in urban political culture.”

There can be no doubt that Mao’s “model of struggle” extirpated communism’s political opposition in the countryside, causing the deaths not just of ideas but of people. DeMare unflinchingly informs us these agrarian campaigns entailed the democide of two million Chinese citizens whom the performers of Mao’s travelling circus classified for slaughter as cruel landlords and class enemies. This figure applies exclusively to the agrarian revolution. Combined with Chinese communism’s other repressive campaigns from 1949 to 1987, Professor Rummel’s China’s Bloody Century puts the death toll at 35 million. And if we include Mao’s wilfully induced famine and Rummel’s 2005 statistical revisions secondary to additional information, the grand total for Chinese Communist Party democide is estimated at 77 million people, making the Party the most democidal political organisation in the history of the world.

DeMare, however, does not refer to the agrarian revolution in terms of a communist democide, nor does he remind us of how Mao’s circus of the gruesomely absurd travelled south across the border in the brain of Ho Chi Minh. Writes Han Suu Yin in Eldest Son: “Ho Chi Minh had internal problems, collectivisation of agriculture, on the Chinese pattern was not going well” (my emphasis). Ho had met with some of that stubborn peasant resistance which Mao instinctively feared. And, like Mao, he overcame it through applied theatrical violence and, where necessary, the military suppression of rebellion. Ho had found his final solution to Giap’s “peasant question” but the blueprint was stamped “Made in China”.

And yet, DeMare concludes that despite its violence, “land reform represented something unique: a treasured moment of cooperation between peasants and the party”. In Land Wars, DeMare relates some warmly treasured instances of revolutionary romanticism, but he also reveals the chilling depths of the Orwellian abyss between the representation of Mao’s “grand narrative” and its murderous denouement and reality.

The Future is a Judgmental Father

A Century of The Thirty-Nine Steps