Australia in Vietnam: Examined but not Explored 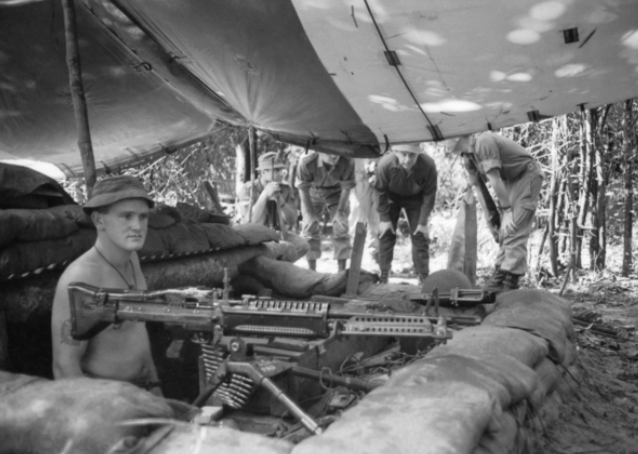 Mark Dapin is a military historian and journalist with a respectable oeuvre of published works. He recently graduated with a doctorate in History from the University of New South Wales at the Australian Defence Force Academy. We remain unmet although we once exchanged sporadic emails. Our postgraduate studies were contemporaneous, as I studied at a lower level doing an MA in Military History. We were both invigilated by the late Professor Jeff Grey. Dapin’s comments on him equate with my own views. Jeff was the ne plus ultra of his sub-specialist guild.

This background is not misplaced, as all three of us, though not Vietnam veterans, were long absorbed in the Vietnam studies project. In 1967, when I was a midshipman in an RAN destroyer, my ship briefly glimpsed the coast of Vietnam from afar. Our brief non-combat transit involved acknowledging some patrolling warships and observing a US fighter-bomber which buzzed over us. I later visited Saigon in early 1975. The republic was undergoing an acute national psychosis, for the people’s fear was palpable. In 1980-81 I served at the Australian embassy in Hanoi.

A doctoral thesis is often the progenitor of a book, whether pitched at an academic level or as a popular work, but Australia’s Vietnam work is neither, yet it still works. It serves a need if we are to better understand the impact of the Vietnam War on the wider society. It reprises an earlier work, which also informed Dapin’s dissertation. The Nashos’ War was published in 2014 to some acclaim and was favourably reviewed. National service, with its complementary demands to resource the Australian army commitment in Vietnam, exercised many twenty-year-old Australian males from its introduction in 1964 to its cessation in 1972. It was both supported and resisted within.

What happened in Vietnam, and why were we there? That ambit study should be left to the higher-end books. As a professional courtesy, I would point readers towards recent reviews of this book, whose writers approach it in a practical and applied way: Hamish McDonald (Saturday Paper, April 25–May 3), Michael Sexton (Australian Book Review, May 20) and Tom Richardson (Age, May 25). There is little point in replicating all the myths which Dapin disposes of comprehensively. Many people find myths helpful in sustaining their mind-sets.

Yet to summarise a few myths will concentrate your mind on the shibboleths which contaminate the history of the war. A few include: no welcome-home parades; violent protests against returning soldiers; capricious drafting of “celebrity” conscripts (such as Normie Rowe); war crimes; mystery Qantas flights into airports in the dead of night; and veterans shunned on their return home.

Dapin neglects to expand on an earlier dissection of his theme. Vietnam veteran Lex McAulay punctured these phenomena in an earlier work (“Myths of the Vietnam War”, AWM Wartime, Issue 20). One enduring myth is that the McMahon government ended the war in 1971. Granted, the Coalition withdrew the Task Force by early 1972. A residual component of 100 members of a military assistance team remained until they, too, were all withdrawn in late December that year when Labor came to office. An embassy guard platoon stayed on until they were withdrawn by mid-1973. Advised by Labor, the Governor-General officially proclaimed the cessation of our combat role on January 11, 1973. At Gough Whitlam’s funeral, some myths grew wings and took unfettered flight again.

This work needs to be nourished by more sources, dated yet still timely. For some inexplicable reason, a reference to a seminal article is avoided. A workable survey by Jane Ross is missing in action: “Australian Soldiers in Vietnam: Product and Performance” in Australia’s Vietnam: Australia in the Second Indo-China War, Peter King, 1983. Ross adroitly runs through the role of the Australian army in Vietnam from 1962 to 1972. She includes statistical tables which help to provide context and understanding.

For a comparison with the Australian experience, Dapin looks at the New Zealand experience of the war, fought by volunteers, despite the draft being sustained throughout the period. Dapin also privileges the role of the Citizen Military Forces in Australia. In a heartening conjunction of patriotism and understandable nervousness, many young Australians heard the faint bugle calls and promptly joined the CMF before their unlucky numbered birthday marble was selected in the regular ballots.

The Australian army assumed the major proportion of our military contribution to Vietnam. The RAN and the RAAF also contributed, but to a lesser degree. The discounting of those perceived two Cinderella services distorts any appreciation of their individual roles. The RAAF did more than punch holes in empty skies; they served too. The RAN had a role—the army depended on them.

Australia’s Vietnam is handicapped by having no accompanying illustrations. The Nashos’ War (2014) contains a thoughtful selection of images, in colour and black-and-white. Photographs add lustre and situate people and events in a historical epoch. That earlier book also included a useful bibliography, whereas this new book disdains such an obligation to readers. But Mark Dapin writes with reflective wisdom and compelling fluency. If, as has been said, “the business of a historian is to make sense of the present by understanding the past”, then Mark Dapin has done his job.

Michael Fogarty, a former naval officer, is a retired diplomat.