Stabbing Their Own Backs 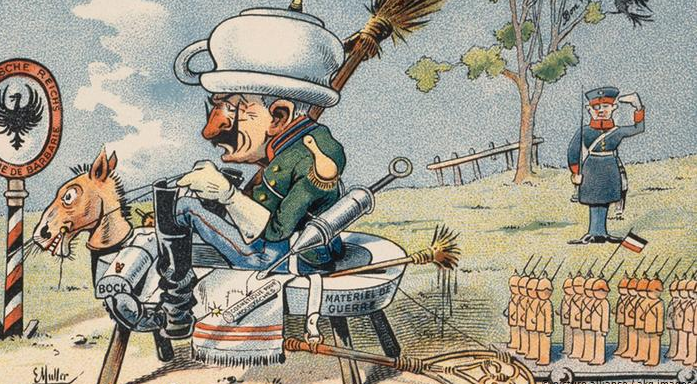 Big, proud, well armed, well trained and drilled, haughty but honourable, the German army in its day was the most fearsome fighting machine on earth. But in the world crisis that began in 1914, its top brass wrecked its own world.

That is the message from this extraordinary history of the First World War, published in German in 2014 for the centenary of the start of the war and now available in a brilliant translation. The author, a youngish professor of European history at Freiberg University, writes calmly and impartially across a vast canvas stretching from Ireland to Korea and Australia and New Zealand, but over a thousand pages the wrecking ball destroying millions of lives was usually the German military leadership or its ally in Austria-Hungary.

It started the war with the misguided invasion of Germany’s neighbours, France, Belgium and Russia. Then, with aggressive territorial claims such as permanent control of Belgium, it thwarted peace moves to end pointless fighting that had been tipped to be “over by Christmas”. It resented the armistice that ended the main conflict more than four years later but had already prepared the way for the Bolshevik Revolution in Russia and for Adolf Hitler. More than a century later, the long trail to today’s mayhem in the Middle East and on the Korean peninsula still leads back to Berlin in 1914.

The initial mistake was to invade France through neutral Belgium in August 1914. The idea was that Russia was mobilising troops to ride west to punish Austria-Hungary, Germany’s ally, for firing on its small neighbour Serbia, over Serbian support for terrorists who assassinated the Austrian Archduke a few weeks earlier. France was Tsarist Russia’s principal ally—out of mutual fear of Germany. Germany’s (meaning the army’s) hope was that it could quickly conquer northern France and march on Paris by invading through Belgium, which had been a guaranteed neutral since 1815. German troops would then move rapidly east against the threatening Russians.

The army’s forlorn theory had been that this would make for a short war on two fronts, as a long war would cause too much social disruption. When I first read about this, continents away and more than half a century on, at a time when maimed elderly veterans were often to be seen, it had seemed weirdly reckless. Professor Leonhard agrees. The Schlieffen Plan, as this emergency manoeuvre was known, “left out key political and military factors”, he writes.

This puts it politely. Only extraordinary luck could have brought success, but providence decreed otherwise. Britain, though a pledged ally of France and guarantor of Belgian neutrality, would have had to stay out, avoiding a continental war; Belgium would have had to let the Germans march through unimpeded; France would not have fought very hard. The Russians would have been slower than they were in reaching the German border. There would have to be no room for slip-ups among the invading Germans.

This sort of strange gambling confidence, underestimation of the other side and blindness to unintended consequences would characterise German decisions time and again, through to repeatedly touching off slaughter on the Western Front, provoking the US to enter the war, helping Vladimir Lenin promote revolution in crumbling Russia in 1917, and then fighting on for the elusive great final victory until forced sullenly and worn out to a ceasefire in November 1918.

Leonhard does not say this frankly, and mentions many a regrettable move by other belligerents, including Britain, in a very long narrative, but it was Germany that invaded its neighbours, that made the most aggressive decisions and thwarted the most initiatives to stop fighting.

None of this is new, but to have it in such calm detail in German as part of a world-ranging account is fascinating. The millions of anguished words written and spoken in German over a century have only rarely got far into English-language discourse. German “militarists” have always been targets for blame. In the old German constitutional system the civil, parliamentary arm was weaker than the militare arm, both beholden to a kaiser, who in Wilhelm II was a fool.

By all accounts, the military chieftains were intelligent, decent enough men, but veterans of a cloistered, hubristic military caste living in a bureaucratic bubble of military glory (not especially well earned) and public esteem, a world of military theory and plans, of intense training and discipline. But the few wars they had fought in the century since Napoleon’s day had been short, victorious and not very taxing.

The military chieftain in 1914, who fired the first shot that went around the world by putting the troops into Belgium, was Helmuth von Moltke, fervent patriot, dignified opera-loving aristocrat, nephew and namesake of the army hero of the earlier Franco-Prussian War. He enjoyed a good public reputation, but according to one Western writer was a weak man wanting to look strong. He was suspect as too much a favourite of the flattery-loving Kaiser. Well before the crisis, he had feared the growing power of Russia and favoured a “preventive war”. He was already ageing and sickening in mid-1914.

Von Moltke amended the Schlieffen Plan, devised by his predecessor, but seems never to have challenged its fundamental weakness. He had a breakdown soon after the war began and retired, seemingly tormented by the disaster. (The precise circumstances of the decision to enter Belgium are obscure and have been subject to politics and back-covering, but it was von Moltke’s responsibility in association with the Kaiser.) The last military chief, Erich von Ludendorff, who was almost a military dictator, became a pacifist later in life, after first embracing the Nazis, who seemingly acted as a purgative.

Leonhard says of the old mindset:

The top military brass, and not only in Germany, had a clear tendency to develop scenarios in which there seemed to be only one option. Arms races, and hardening of bloc alliances, and, above all the autonomous logic of offensive strategies, and the dynamics of mass mobilisation (call-up, equipment and transportation) on the eve of war were all factors contributing to this lack of perceived alternatives.

This tendency was particularly strong in Germany, where there was no effective civilian control over the military and a vacuum could arise in which panicky visions of encirclement and over-hasty reliance on standard reactions could gain preponderance … there was no single path to the decisions of Summer 1914, but the one-track thinking and failure to allow for possible consequences invariably weighed heavily in the great crisis.

Leonhard says there was a tendency on all sides to invent reasons for the war, its origins being so undistinguished. It was difficult to stop because both sides were evenly matched and on either side victory never seemed far off.

I found especially interesting the evolution towards later Nazism after 1914. Like all the belligerents, including Australia, Germany slipped from being a fairly benign society into a mass mood of war fever, with strident patriotism, shrill hatred of the enemy and morbid suspicion of minorities. But there was also a particularly intense mood of what in Britain was ridiculed as “poor little Germany”, a sense of victimhood, that the world was unfairly targeting a blameless nation.

In 1917, after continued slaughter and stalemate, the Reichstag passed a resolution favouring a ceasefire without the conditions, acquisitions of territory and reparations (compensation) the army wanted. It seemed to reflect what most Germans wanted, but the army advised the pliant Kaiser to reject it and a furious hard-Right minority emerged, vehemently opposing any peace that did not honour with substantial gains the sacrifice of the war dead and of the German people. Its patriotism became even more fanatical, racist and vindictive, hysterical in its hatred for unions, socialists, Jews and other minorities. Leonhard sees these and the earlier self-pitying sentiments as precursors to the “stab in the back” story of 1918, when these same opponents of the Armistice claimed socialists, unions and Jews had stabbed the army in the back. They dubbed them (as did Hitler) “the November criminals”. Leonhard does not go as far as to suggest the beginnings of Nazism here, though the trend seems plain. Hitler’s main message was vengeance for the First World War.

The Reichstag and the civil wing of government asserted themselves more, and when the Allies approached the border of an exhausted Germany they combined with the army to force the Kaiser to abdicate and agree to the armistice that ended the western war on November 11, 1918. With two million Germans killed by then, the army did not have enough troops to fight on. Like many other countries, Germany was fraying socially, weeping, worn out and hungry. When the German peace-makers arrived in France to sign the Armistice the Allies presented harsher terms than had been expected, so weak had the German bargaining position become. This was not forgotten beyond the Rhine, but it could have been much worse. Leonhard says:

Since the outcome was so unpredictable until late 1918, the eventual defeat came as a surprise, such an inexplicable turnaround, that many attributed it to treachery behind the lines. This was a critical difference between 1918 and 1945.

Once “Prussians” were typically held responsible for the war, not least among Germans seeking a scapegoat. Prussia was the big artificially-patched-together northern state that dominated Kaiser Germany but was dismantled after the war. Its Junkers (East German landed aristocrat families) dominated the army. Leonhard hardly mentions Prussia and it is not listed in the index, suggesting that more recent scholarship sees responsibility as more widespread.

Leonhard mostly avoids personalities, but his rare distaste shows for Conrad von Hotzendorf, the Austrian military chief who had the itchiest fingers against Serbia after the assassination and could be construed as embroiling a not very reluctant Germany into it all. He also points to the culpability of Sazonov, the aggressive Russian foreign minister.

Australia gets a page or two all-up, including Gallipoli (a British mistake but good for Antipodean psychological nation-building); Billy Hughes and conscription; and the “important contribution” of the troops Monash led in France in 1918.

This is the sort of book both world wars deserve: fair-minded, global in reach, more social than military history.

Robert Murray is the author of The Making of Australia: A Concise History (Rosenberg) and a frequent contributor to Quadrant on history

2 thoughts on “Stabbing Their Own Backs”

The Art of Avoiding the Obvious