The Escalating Madness of Leftist Crowds 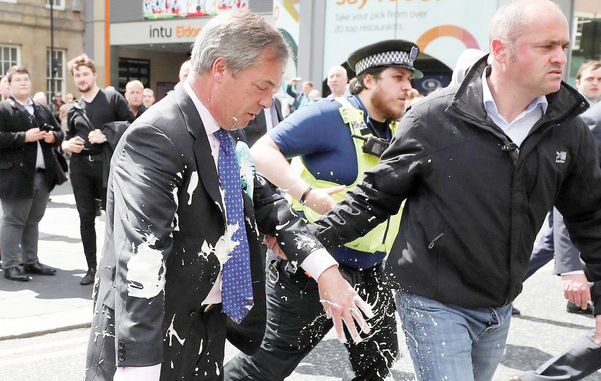 I see that Nigel Farage has sparked yet another political innovation. Dry cleaners of the world are smiling. A few weeks ago, Mr Farage presented what Aristotle might have described as the final cause, that for the sake of which, an agitated onlooker tossed the contents of his plastic cup into the campaigning politician’s face and all over his dark blue suit. It looked like a nice suit, too.

It’s a gesture that is catching on. During President Trump’s recent state visit to the UK, one of the President’s supporters was—language police: what’s the correct participle?—milkshaked? Milkshook? I favour “shook”. Anyway, a chap in Trafalgar Square got doused by an angry anti-Trump protester. (Why are all anti-Trump protesters always so red-in-the-face angry?) What a waste of a good milkshake. Were Thomas Aquinas available, he might analogise the procedure to the sin of Onan, the misuse of a God-given faculty and improper spilling of precious liquid. But the Atlantic, noting the new popularity of (left-wing) people tossing milkshakes at (right-wing) people with whom they disagree, assures us that “Sometimes a Milkshake Is Just a Milkshake”. At least it’s not boiling hot coffee, the author wrote—or acid, or a Molotov cocktail. Be thankful for small mercies.

That’s one way of looking at it. Another is to note the artificially induced persistence of public insanity on the issue of Donald Trump. Here, the title of Charles Mackay’s classic Extraordinary Popular Delusions and the Madness of Crowds says it all. As Noël Coward sang of mad dogs and Englishmen, “They’re obviously, definitely nuts!” There is, however, a looming disturbance in bedlam. There is still plenty of skirling insanity. Jerrold Nadler, the Democratic chairman of the House Judiciary Committee, gives almost daily performances from behind his desk in the US Capitol. But there is a chill wind blowing through those chambers that is making the children shiver and think of heading home. The name of that refreshing breeze is William Barr, Donald Trump’s new Attorney-General.

Mr Barr has been around the political block a few times. He was Attorney-General once before, way back in the last century, under George H.W. Bush. Unlike his predecessor, Jeff Sessions, there is no rabbit about William Barr. When he was first confirmed, there were cries from people in Jerry Nadler’s corner for him to recuse himself from anything that had to do with the Democrats’ campaign to destroy President Trump (this is what we call an “investigation”), but Barr did not even bother to laugh. The man is entirely unflappable. After Robert Mueller delivered his two-volume fantasy fiction manuscript to Barr this spring, Barr and his colleagues dissected the report. They noted that it had determined that there was no collusion or co-ordination between the Trump campaign and the Kremlin (sadness!).

They also concluded (what Mr Mueller had forborne to conclude) that the President exercising his constitutionally-defined powers did not count as obstruction of justice. The Democrats in Congress and their PR representatives—that is, the press—had been bitterly disappointed to learn that the President of the United States was not in fact a Manchurian candidate who was in Putin’s pocket. (Actually, I could have told them that years ago, but they never asked.) After that bitter disappointment they had pinned everything on obstruction. “Surely we can get Trump for that! It worked against Richard Nixon, didn’t it?”

So when Barr held a press conference and revealed the worst—that he and his colleagues had read the report, consulted the law, and determined that there was no obstruction, it was a bitter harvest. Fletus et stridor dentium (Matthew 8:12) as far as the eye could see. “You cleared the president on obstruction,” wailed a reporter, “and here you have remarks that are quite generous to the president … You say [it was] an unprecedented situation. It just seems like there’s a lot of effort to say, to go out of your way to acknowledge—” Barr cut to the chase:

William Barr: Well, is there another precedent for it?

Reporter: No, but it’s unusual that—

William Barr: Okay, so unprecedented is an accurate description.

Whooosh, the air hisses out of that balloon and the Attorney-General moves on to other question.

The most recent big event, one that is still being digested by the pythons of the commentariat, was Barr’s long interview on CBS with Jan Crawford at the end of May. Barr’s calm and thoughtful mode of expressing himself prevented some commentators from absorbing the extraordinary things he was saying. Here are a couple. I have helpfully added emphases as an aid to the busy reader:

Jan Crawford: So when we talk about foreign interference versus say a government abuse of power, which is more troubling?

William Barr: In my mind, they are, sure. I mean, republics have fallen because of Praetorian Guard mentality where government officials get very arrogant, they identify the national interest with their own political preferences and they feel that anyone who has a different opinion, you know, is somehow an enemy of the state. And you know, there is that tendency that they know better and that, you know, they’re there to protect as guardians of the people. That can easily translate into essentially supervening the will of the majority and getting your own way as a government official.

I invite you to unwrap and savour the lozenge marked “Praetorian Guard mentality where govern­ment officials get very arrogant”. Admittedly, that was a bit oblique. I mean, who in Washington really knows what the Praetorian Guard was? But Barr brought it much closer to home in words that everyone in Washington knows. Step One:

Jan Crawford: And you are concerned that that may have happened in 2016?

Jan Crawford: Did that happen?

William Barr: There were counterintelligence activities undertaken against the Trump Campaign. And I’m not saying there was not a basis for it … but I want to see what that basis was and make sure it was legitimate.

It is at this point, if you are James “Higher Loyalty” Comey, the disgraced former director of the FBI, that you start writing angry op-eds for the Washington Post. “There was no corruption,” Comey shouted. “There was no treason. There was no attempted coup. Those are lies, and dumb lies at that. There were just good people trying to figure out what was true, under unprecedented circumstances.” Good people, Kemo Sabe. I am not sure what you do if you are John Brennan, former Gus Hall voter and Obama’s head of the CIA. If I were his mother, I’d tell him to lawyer up.

And here is Step Two of Barr’s revelation:

William Barr: I love the Department of Justice, I love the FBI, I think it’s important that we not, in this period of intense partisan feeling, destroy our institutions. I think one of the ironies today is that people are saying that it’s President Trump that’s shredding our institutions. I really see no evidence of that, it is hard, and I really haven’t seen bill of particulars as to how that’s being done. From my perspective the idea of resisting a democratically elected president and basically throwing everything at him and you know, really changing the norms on the grounds that we have to stop this president, that is where the shredding of our norms and our institutions is occurring.

Bingo. Bullseye. Give that contestant the prize teddy bear. And there was a lot of tangy watercress surrounding that entree. Remember the anti-Trump love birds Peter Strzok, former head of the FBI’s counter-espionage operations, and Lisa Page, former lawyer for the FBI? Strzok was there at ground zero in the investigation against Trump (and Trump’s associates like General Mike Flynn, his first National Security Advisor). We have Republican Congressman Devin Nunes to thank for making the extraordinary texts between the two public—texts that described Donald Trump as an “idiot”, that spoke of an “insurance policy” to be sure he was not elected, and so on. Republican Congresswoman Liz Cheney rightly noted that the texts “sound an awful lot like a coup—and it could well be treason and I think we need to know more”. Barr was more circumspect but no less dramatic:

It’s hard to read some of the texts, and not feel that there was gross bias at work and they’re appalling … Those were appalling. And on their face they were very damning and I think if the shoe was on the other foot we could be hearing a lot about it.

Barr is not jumping to conclusions. And he is nothing if not judicious. He told Crawford:

I’m not suggesting that people did what they did necessarily because of conscious, nefarious motives. Sometimes people can convince themselves that what they’re doing is in the higher interest, the better good. They don’t realize that what they’re doing is really antithetical to the democratic system that we have. They start viewing themselves as the guardians of the people that are more informed and insensitive than everybody else.

Again, bullseye. It was ever thus. Jean-Jacques Rousseau was drunk on the aroma of what he took to be his unsurpassable virtue. So was Vladimir Lenin.

I do not think that Comey et al are like Lenin (always making an exception for John Brennan), but I do think they were drunk on the liquor of their own virtue—the conviction that theirs was no ordinary loyalty but (as Comey put it in his book title) a “higher” sort of loyalty that superseded and cancelled out the pedestrian sorts. They were also—and this cannot be too much emphasised—drunk on their own power, backed by the bureaucratic prerogatives of the administration state. Nevertheless, William Barr is confronting them with a moment out of a poem by Andrew Marvell—call it “To His Coy Justice”: “But at my back I always hear / Time’s wingèd prison hurrying near; / And yonder all before us lie / Indictments of vast eternity.” That’s transcribed from memory. Some of those folks, I reckon, will have plenty of opportunity to ponder it. “The cell’s a fine and private place / And some, I hear, do there embrace.”

We in America have just undergone the biggest political scandal in our history. The months ahead will offer up the post-mortems and, in due course, a slew of investigations and, probably, indictments. Extraordinary delusions and the madness of crowds indeed. Buckle up.

Roger Kimball is the Editor of the New Criterion

2 thoughts on “The Escalating Madness of Leftist Crowds”

US Letter: The Left Faces Reality