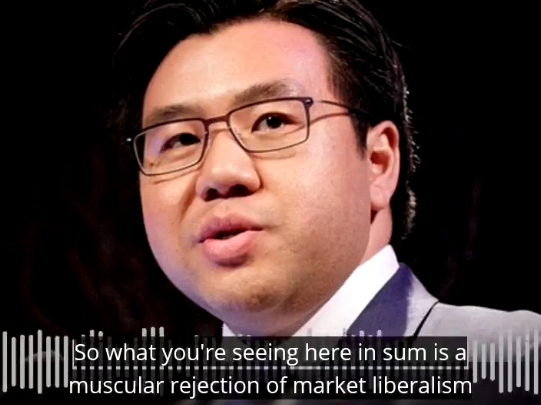 To be fair, that report would have enraged anybody. It listed a series of allegations levelled at a man who was said to have terrified a large Islamic family as they attempted to enjoy a picnic in a park south of Sydney. The rowdy fellow allegedly threatened to kill members of the family before driving his car in muddy loops around them, yelling obscene anti-Muslim abuse all the while. According to police accounts, some family members were in tears by the time officers arrived and arrested the accused.

“What a terrible experience this must have been for the family targeted,” Soutphommasane responded on social media. No argument there. But then Soupy put on his enchanted race discrimination goggles, which enable him to detect motives and place blame despite a total absence of evidence. “Such violent conduct doesn’t happen in a vacuum,” Soupy ruled. “For too long, certain politicians and media have been fomenting anti-Muslim hate. Hope it is met with the full force of the law.”

And there you have it. A Muslim family are allegedly abused and Detective Souperman immediately nails the culprits: “certain politicians and the media”. You can guess who he meant. They tend to appear frequently in comments Soupy leaves at his virtuous little Twitter site.

A perspective realignment may have taken place inside the now sociology and political theory academic’s head a few hours later, however. That initial AAP report did not name the alleged offender or provide any background details. But subsequent reports did, the very same day.

The accused turned out to be one Sharaf-Deen Yusuf, a homeless forty-three-year-old man of Nigerian background. Furthermore, Yusuf at one point in his early April hearing requested that Legal Aid be withdrawn from his case.

“I feel discriminated against,” Yusuf told the presiding magistrate. “I’m a black man, I’m a Muslim and I don’t think he [the solicitor] likes me at all.”

Now, I’m not a very spiritual person, but surely this is evidence of Bill Leak’s handiwork from the Hereafter. He’s crafted a perfect humiliation for stupid Soupy, whose baseless pursuit of the late cartoonist over racism claims should have seen the entire Australian Human Rights Commission dashed to atoms.

We’ll leave Soupy now to Bill’s further gentle ministering and consider instead the welter of perspectives cast all about the place following the horrific shooting deaths of fifty mosque attendees in Christchurch, New Zealand. Australian white supremacist and accused terrorist Brenton Tarrant’s self-absorbed manifesto, published online prior to the alleged murders, provided opportunity for pundits across the political spectrum to place blame wherever they wished.

Just a theory, but maybe Tarrant was responsible. Best leave that to the courts. Also fascinating were the changed perspectives of many who had previously commented on terrorism. Following the deaths of nearly 3000 people in the 2001 9/11 attacks, the Sydney Morning Herald’s Peter FitzSimons apologised to the killers: “We are sorry. We are desperately sorry that the world has now moved to the point where it is on the edge of an abyss from which there can be no return. We accept that such hate as drove the planes into the World Trade Centre towers can only have come from incredible suffering, and we are desperately sorry for that suffering, even if we are yet to come to grips with its specific cause.”

He hasn’t apologised for Tarrant’s “incredible suffering”, which apparently is at the root of terrorist acts. Five years ago, the ABC’s Jonathan Green had a few deep thoughts: “Could be any day now … the sudden indiscriminate smack of a terrorist attack. Our best defence is of course our cultured reason. Our tolerance. Our audacious confidence in the fundamental goodness of others. Maybe even our sense of humour.”

Not seeing much “fundamental goodness” myself out of that Christchurch cowardice. Neither is Green. Perhaps the biggest perspective shift came from Ten’s Waleed Aly, who had this to say when two Islamic killers murdered three people and severed the limbs of sixteen others in bomb attacks on the Boston Marathon:

We’re finally maturing in the way we handle terrorism. Gone is the triumphalist rhetoric of the “War on Terror”, with its ridiculous promises of a terrorism-free world and the ultimate victory of freedom over tyranny.

In its place is a far more sober, pragmatic recognition that terrorism is a perpetual irritant, and that while it is tragic and emotionally lacerating, it kills relatively few people and is not any kind of existential threat.

No big deal, then. But Waleed was not quite so sanguine post-Christchurch. “I’m gutted and I’m scared and I feel overcome with utter hopelessness,” he said on Ten’s The Project. Terrorism is evidently an irritant no longer:

While I appreciate the words our leaders have said today, and in particular Scott Morrison’s comments and his preparedness to call this terrorism and the strength of his comments more generally, I have something to ask.

Don’t change your tune now because the terrorism seems to be coming from a white supremacist. If you’ve been talking about being “tough on terrorism” for years in the communities that allegedly support it, show us how tough you are now.

They’re a lot tougher now than Aly was then. Consider, please, the wrath that would have deservedly come down upon Morrison or anyone else had they dismissed the Christchurch massacre as a mere “irritant” that killed “relatively few people and is not any kind of existential threat”.

As Waleed himself said, “Don’t change your tune now.” But he did, and so will Tim Soutphommasane.

WHEN in office, former Prime Minister John Howard used to say that he held the second-most important job in Australia. The most important, even above being PM, was being captain of the Australian cricket team.

It’s surprising, then, that Malcolm Turnbull didn’t pick up on this and focus his ambition on the higher calling. As it happens, the very same tactics he used to become PM could also have worked if he had sought our cricket captaincy.

From the outset, Turnbull’s social circumstances and background would have placed him advantageously among the sort of folk who enjoy senior administrative and commercial roles with cricket. There is some considerable overlap in Australia between sport and politics. His time as a legal adviser to Kerry Packer could just as easily have been spent as a cricket broadcasting adviser, further drawing Turnbull towards his ultimate aim.

Turnbull’s closing submission in the British Spycatcher case could, with a couple of small alterations, be a cricket coach’s speech on the virtues of practice: “The fact of the matter is that nothing is achieved in this world, particularly politically, other than with persistence, and persistence involves repetition and it involves argument and re-argument.”

Or, alternatively, batting and more batting. Next, rather than trampling over Peter King to become the Liberal candidate for Wentworth, our imagined cricketing Malcolm would have done the same to a New South Wales Sheffield Shield captain. As a leading campaigner for an Australian republic, Turnbull’s insights into Ashes Tests between Australia and England might have attracted much attention in the press, building Turnbull’s profile.

Upon reaching the sport’s senior ranks, Turnbull would then turn his eye upon the gentleman currently leading our national team. His undermining of that captain coinciding with thirty straight Test defeats, Turnbull times his captaincy bid to perfection.

At this point, every single one of Malcolm Turnbull’s career moves in the aim of one day becoming the Australian cricket captain has paid off. He has cultivated contacts in cricket administration, cricket journalism and among cricket followers. He has a number of supporters within the Australian cricket team who believe Turnbull is a worthy force for modernising our summer sport.

Even opposition captains and players hail the rise of Turnbull. When Cricket Australia eventually calls a vote, Malcolm Turnbull is finally appointed captain. His life’s destiny is fulfilled.

For a time, all is well. It’s the off-season, so Turnbull does little but enjoy the adulation of his fans. Opinion polls show he is vastly more popular than the previous captain, and hugely more popular than any rival team leaders. Some in the media imagine he may remain captain for decades.

Then summer is upon us, and the First Test commences in Brisbane. Turnbull strides out to open the batting, determined to lead from the front. He carefully scans the field and prepares for the bowler’s first delivery. It is a short ball, rising towards the batsman’s helmet. A moment later, as the ball clatters into his faceguard, everybody watching the game realises something that had completely escaped them during Turnbull’s ascent.

He doesn’t know how to play cricket.

6 thoughts on “Oh, How Bill Leak Must Be Smiling”