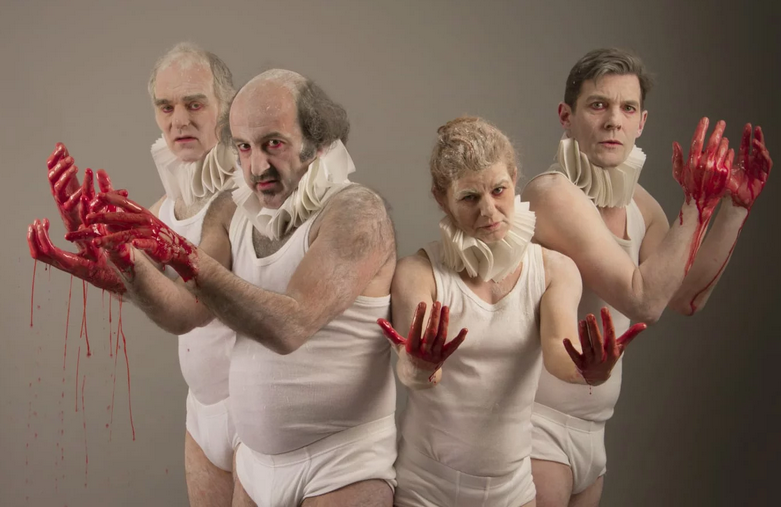 The precise date of the discovery by theatre directors that they are greater than Shakespeare cannot be specified: the discovery was more a process than an event. But by the time I saw a production of Richard II at the Almeida Theatre a few weeks ago, the superior genius of any director over that of Shakespeare was an established principle and indisputable fact.

Until then, I had mistakenly thought of Richard II as an early manifestation of Shakespeare’s unique genius, of his uncanny ability to make us not only observe the minds at work of a huge range of characters, but somehow to transform us for a while into those characters, so that we ourselves become them. Most of us have never been abruptly thrust down from high positions, never having reached them in the first place, much less have we ever been a deposed king. But when King Richard says:

… within the hollow crown
That rounds the mortal temples of a king
Keeps Death his court; and there the antick sits,
Scoffing his state and grinning at his pomp;
Allowing him a breath, a little scene,
To monarchize, be fear’d, and kill with looks,
Infusing him with self and vain conceit
As if this flesh which walls about our life
Were brass impregnable; and, humour’d thus,
Comes at the last, and with a little pin
Bores through his castle wall, and farewell, king!
Cover your heads, and mock not flesh and blood
With solemn reverence: throw away respect,
Tradition, form, and ceremonious duty;
For you have but mistook me all this while:
I live with bread like you, feel want,
Taste grief, need friends: subjected thus,
How can you say to me I am a king?

—we become, in some sort, not merely witnesses to his downfall, but downfallen ourselves. All of us “live with bread … feel want, taste grief, need friends”, and through this speech we come to appreciate our existential equality with all humanity. We are overthrown king for a moment.

But if I had an elevated conception of Shakespeare, how naive and mistaken I was! I knew nothing of Richard II—the play, that is, not the king—until I saw the production by Joe Hill-Gibbins. How narrow had been my previous conception of it! I discovered, among other things, that Richard was a short, fat fifty-eight-year-old in a black T-shirt, with a crown of the kind that is awarded to the person who finds the fève in the galette des rois that the French eat on the sixth of January, that the Duke of Norfolk was a woman dressed like a cleaning lady, and that all the action of the play takes place in what looks like a large biscuit tin, without exit or entrance. All this, of course, means something far deeper than anything that a mere Shakespeare could convey, being deeply symbolic, and therefore required real inventive genius on the part of the director to bring forth.

While the same actress took the parts of the Duke of Norfolk, Bushy and Green (all of them looking like cleaning ladies and each indistinguishable from the other because they could not leave the stage even to change costume), and the parts of both the Earl of Northumberland and the Bishop of Carlisle by other actresses, actual women’s roles such as that of Richard’s Queen were expunged entirely from the text. Between them, three actresses played five male parts and only one female. There is a profound lesson in this somewhere, no doubt in enlightened gender fluidity.

Most of the lines were delivered as if they were a religious incantation in a dead language that both the celebrants and the congregation desired to get over with as quickly as possible, clear diction being one of the many tools by which class hegemony is so unjustly exercised. The actor who took the part of Richard, it is true, was comprehensible, but made the acting of Sir Henry Irving appear taciturn by comparison. If emphasis is good, overemphasis must be better: no more stiff upper lip, we are all hysterics now, and can understand nothing that is not accompanied by gesticulation.

The director fortunately realised that Shakespeare got the order of his play wrong: Richard’s great speech in Act V scene 5 (“I have been studying how I may compare / This prison unto the world …”) was actually a prologue. The director is not the interpreter of Shakespeare, but rather Shakespeare is, and ought to be, the occasion, the opportunity, for the director to place his own immortal (and highly original) genius before the world.

We come now to the very delicate question of the over-representation of black actors in productions such as this (and many others). They are now included in casts out of all proportion to their number in the general population, and unlike such disproportion in professional football teams, this disproportion is not the consequence of superior talent or ability. It is quite obviously, but also unmentionably, the consequence of policy.

When John of Gaunt is black and Bolingbroke is white, in effect the audience is being bullied into pretending that it notices nothing odd when father and son are enfolded in each other’s arms. The audience is forced both to see and to deny what it has seen, thus being subjected to the kind of mental discomfort that was produced by propaganda in totalitarian countries, which was so powerful a method of cowing and controlling populations.

An entirely black cast of Richard II would not be in the slightest disturbing, or even a production in which Richard II alone were played by a black actor. I once saw (about a quarter of a century ago) an excellent Macbeth in which Macbeth was black, in this case a very fine actor of superb diction. Any initial surprise was soon overcome and disbelief easily suspended; but it is harder to suspend disbelief when Bagot and Aumerle, John of Gaunt and Lord Willoughby are played by black actors, moreover without great distinction. One is in the presence of agitprop.

Moreover, it is agitprop of an obviously racist variety. The British stage is now riven with racism, if by racism we mean the tendency to believe that race is and ought to be an important determinant of policy, for example in the allocation of jobs. And it is obvious that, lying not very deeply under the positive discrimination exercised in the casting of plays in British productions, is an attitude of condescension at best and contempt at worst.

You would never guess from the British theatre that the largest ethnic minority by far in the country is of Indian subcontinental origin: it will be a very long time before you see a Bangladeshi Juliet or a Sikh Angelo. It might be argued that those of Indian origin are not interested in appearing on the British stage, but if so (according to a certain way of thinking) this would only be an argument for even more positive discrimination in their favour. More probably, it is felt that people of Indian origin can look after themselves: they need no assistance or helping hand up.

The mental contortions that are now required of us to be considered, and to consider ourselves, decent respectable citizens would be enough to baffle Houdini. Some demographic disproportions must never be alluded to or even noticed, others must be referred to ad nauseam, and the decent person must know by instinct, as it were, which is which. Some disparities must be constantly measured, others persistently ignored. And you must never let your guard down in discriminating which discriminations are discriminatory. After all, received wisdom can change as quickly as the enemy during the hate sessions in Nineteen Eighty-Four.

In a twisted way, however, I enjoyed the production of Richard II, though I did not sit through it to the end: for who does not enjoy his own outrage? It was the theatrical distillation of one of the prevailing cultural currents of our time, militant ruthless mediocrity.