The Meaning of Elvis

From shotgun shack to Graceland mansion. From driving a truck to flying in his own jet. From singing in a country church to performing for one billion people. The only recording artist to sell a billion records. The American who Leonard Bernstein proclaimed as “the greatest cultural force in the twentieth century. He introduced the beat to everything—music, language, clothes—it’s a whole new social revolution.” The world’s most popular and influential entertainer: Elvis Aaron Presley.

Presley remains—forty-two years after his death and eighty-four years after his birth—an icon. Each year 600,000 fans visit Graceland and many new CDs of his music are released. Presley biographer Peter Guralnick reports that the recording company RCA “would discover that Elvis was as great a sales phenomenon in death as in life”. Elvis Presley Enterprises in 2017 earned $35 million, making it the fourth-highest-earning estate of a deceased star.

A 2009 CBS News Poll found that Presley’s popularity had not dropped in the previous ten years and that 42 per cent of Americans describe themselves as Elvis fans. A 2012 ABC News poll found that “38 per cent of Americans name Elvis Presley as the greatest rock ’n’ roll star ever. Of the 128 performers named, no one else even breaks single digits.”

But the meaning of Elvis is more than an American rags-to-riches story, much more than his unrivalled and enduring influence and popularity. Why is Elvis Presley an icon?

Each of us is born into a historical context, a specific place and time embodied by certain values, virtues and beliefs. Elvis was born into a poor family in America’s South in 1935 and exploded into fame some twenty years later. During his formative years, Presley was influenced by his devoted parents, who taught their only child to have good manners, to be optimistic, to dream. The young Elvis attended church, where he began his lifelong yearning for mystical answers to the meaning of life. He grew up beside radios and jukeboxes, absorbing the rhythms and beats of American blues, rhythm and blues, gospel, pop and country music. He breathed in post-war America, a time of great comic-book adventures, celebrated war heroes, movie stars whose exploits conquered all frontiers, and in his later home town of Memphis, of flamboyantly dressed black singers belting out the blues on Beale Street.

In America the 1950s was a time of overt peace (despite the Cold War) and robust economic growth. The resulting prosperity generally gave Americans leisure time, and more specifically, for the first time teenagers became a cultural and economic force: they had money, set trends, and were to become stars. A generation of wide-eyed kids were free to achieve their ambitions and express themselves like no other generation before them.

In this historical context—this creative cauldron of freedom, prosperity and opportunity— rock ’n’ roll was created, first (though this is disputed by some) by black artists like Fats Domino and Ike Turner for their black audiences, and then by artists of all colours for all kids. Rock ’n’ roll was colourblind.

It was through rock ’n’ roll that American teens could separate themselves from their parents and  forge their own identity. The phenomenon of the teen rebel was born and these rebels searched for someone who represented them. Every rebellion needs a hero. Every movement creates a symbol. The first 1950s teen “rebels” were American, and the meaning of America reveals the nature of these rebels and the meaning of the man who would become their hero.

Like an individual, a country has its own style, its own identity or self, its own unique combination of values, virtues and dominant beliefs that fuse into an archetype. The French are chic, as expressed in their beautiful fashion sense and language; the Spanish are passionate, as displayed in their flamenco dancing; the English have bulldog grit, as symbolised in Winston Churchill’s grim visage and determined opposition to Nazism.

What then are the dominant traits of Americans? To be an American means: innocent, optimistic, benevolent, confident, independent, enterprising and can-do. To expand on just one core American trait, benevolence: Americans (particularly in times past) believe that they can find meaning and happiness in life, that they can make their dreams come true. The cheery hopefulness, confidence and sense of wonder about life that animate American children are famous worldwide. The infusion of these values makes American youth the quintessential youth and the best representative of the spirit of America.

To whose standard could these benevolent 1950s American rebels look? There were popular candidates. Marlon Brando in The Wild One is asked, “What are you rebelling against, Johnny?” He replies, “Whaddaya got?” Brando was too negative for broad appeal to Americans. Ditto James Dean, whose cool was that of an outsider torn by angst and failure.

The question was answered on January 27, 1956. Released on this day, “Heartbreak Hotel” was a declaration of youth independence. A few rare individuals in every period integrate, express and add to the values of their time and place in a unique way and become symbols of that time. More than any other national figure of the 1950s, Elvis Presley represented American youthfulness and became a generation’s symbol. 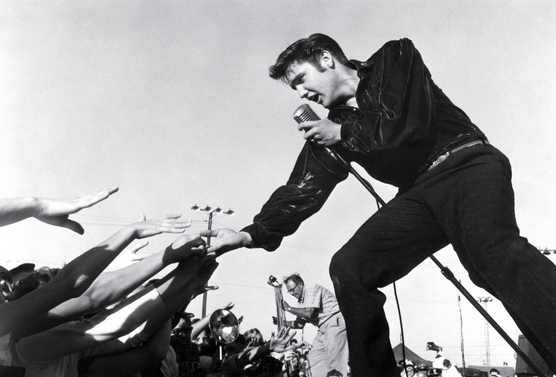 Individualism. Elvis was an independent artist who created art by his own standards and vision. He sang his way (the high-pitched country whine). He dressed his way (the gold lamé suit). He danced his way (the thrusting, sliding, gyrating). He created music his way, such as his revolutionary interpretation of “That’s All Right”. He integrated American music forces—hillbilly, gospel, rhythm and blues—his way. His persona was a dramatic new paradox: one side of him the infamous upturned lip, the wild concert performances burning with a raw sexuality of voice and body; somehow co-existing in the same person with the momma’s boy, the Southern charm and politeness, the boy on a pew. Elvis was all-American but in a new artistic integration, as if he had joined different aspects of the country: worldly success and spiritual yearning, white and black musical traditions, all fused into a new man that was his own creation.

Ambition. From an early age, Presley dreamed big and pursued achievement and the skills needed to attain it. “I read comic books and I was the hero of the comic book. I saw movies and I was the hero in the movie.” Elvis was inspired by the comic book hero Captain Marvel, by movie stars Tony Curtis and James Dean. He listened incessantly to music, learning from Mario Lanza (opera), Arthur Crudup (blues), Mahalia Jackson (gospel), Hank Snow (country), Dean Martin (pop) and others. Presley endlessly practised his guitar and singing, cornering friends in a school yard or on a river bank to play to them. People were amazed at how many songs he knew. He once declared, “Ambition is a dream with a V8 engine.” And he also stated, “I don’t regard money or position as important. But I can never forget the longing to be someone. I guess if you are poor, you always think bigger.”

Benevolence. Presley’s aura of benevolence—that success and happiness are the rule—was vividly clear in his much derided but revealing films of the early 1960s. In hit movie after hit movie, Presley played the archetypal young American: good-looking, happy and charming, enjoying life and simple adventures in a world where all great issues have been resolved and tragedy banished. Elvis’s rise from humble beginnings is a classic American tale that speaks profoundly of the benevolence of the American dream: success is possible for everyone. The Guardian reported that “In the late 50s, Elvis was fond of claiming that the US government had [discussed] a visit to Graceland by [then Soviet Premier] Nikita Khrushchev, ‘to see how in America a fellow can start out with nothing and, you know, make good’.”

Innocence. Although a “rebel”, Presley was the product of an optimistic, positive and this-worldly America, whose people generally saw life guiltlessly, with honest, cheerful openness. While Presley may have riled preachers and editorialists across the nation with his wild stage antics and rebel persona, to rational observers he represented, not rampant satanic hedonism, but a teenage desire for fun. His on-stage sexuality was innocent, honest self-expression and a healthy contrast to the sexual repression of earlier times.

Confidence. Part of the American legend is the American as the independent, self-assured pioneer creating a new world. America has produced many such great men—Jefferson, Rockefeller, Edison, De Mille, Disney. Underpinning their reshaping of the American political, business and arts landscape was Mount Rushmore-sized confidence, talent and efficacy.

As a modern entertainer, Presley is the purest form of American talent and skill. In the recording studio, he arranged songs into interpretations that set trends to the present day. He perfected rock ’n’ roll. When the opera star Kiri Te Kanawa was asked who had the greatest voice she’d ever heard, she answered, “The young Elvis Presley, without any doubt.” Another opera star, Placido Domingo, declared, “His was the one voice I wish to have had, of all those emanating from singers in the popular music field.” One of Elvis’s songwriters, Jerry Leiber (the lyricist of the Leiber & Stoller team) stated:

He had an incredible, attractive instrument that worked in many registers; he could falsetto like Little Richard, his equipment was outstanding, his ear uncanny, and his sense of timing second to none.

Elvis’s American virtues were on their most explosive display on stage. His 1968 career-saving Comeback Special showcased Presley as the uber modern American male. The television show’s director Steve Binder described him:

you stop, whether you’re male or female, to look at him. He was that good looking. And if you never knew he was a superstar, it wouldn’t make any difference; if he’d walked in the room, you’d know somebody special was in your presence.

During the special’s live concert segments, on a small stage in the round, dressed in black leather and surrounded by staring or screaming pretty women, Presley gave the performances of his life. Prowling the stage like a panther, lithe and masculine, Presley glowed with confidence and purpose. He sang—ranging from the pleading “Lawdy Miss Clawdy” to the burning “Heartbreak Hotel” to the soulful “Memories”—as if releasing his deepest feelings, and it was as if the audience could express its own deepest passions only through him. Here was a generation’s face, body and voice, its spirit of life as life was surely meant to be: beautiful, free, passionate, great. It was this value affinity between artist and audience that made Presley the most popular entertainer of modern times.

On that stage, more than anywhere else, Elvis Presley revealed himself and his meaning. He sang as if he were alive in the purest form. No fear, no doubt, no repression, no compromise. Here was the performer—laughing, strutting, smiling, kneeling, arms swung wide, head flung back—who embodied raw, passionate life. Here was the man who, above all other modern entertainers, represented the beauty and greatness of America.

What was to befall this American ideal after 1969 is another story, with a different meaning, but we should not forget his inspiring early life and his many gifts to us, which demand that we appreciate that an end does not always invalidate a beginning—and demand that we should know and celebrate the values and virtues of the youthful Elvis Aaron Presley. They are the best within us.

Scott A. McConnell is a script consultant in Los Angeles and Melbourne, and is vice-president of Australians in LA. He wrote “The Meaning of the Western Movie” for the March 2018 edition

7 thoughts on “The Meaning of Elvis”