Australian cartoonists play it rough. Their illustrations often get away with accusations which, had they been made in words, would have led to defamation suits. It has long been true that the cartoonists employed by our mainstream newspapers are more piercing critics than those of any other country.

That is why the cartoon by Mark Knight of the Melbourne Herald-Sun about Serena Williams’s abuse of the umpire when she lost the final of the US Open last month attracted so much attention around the world. Foreign celebrities are not used to this kind of treatment, especially when they are black and female.

Knight drew the tennis player as a baby having a bad tantrum. Anyone who has raised a child is familiar with the scene: the toddler is unhappy, so throws his food and drink to the ground, stamps his feet and won’t stop screaming—just like Williams abusing the umpire. The analogy was not racist or sexist, as Knight’s numerous critics have claimed, let alone a revival of Jim Crow images of the Reconstruction era, as ABC television news and other leftist sites sermonised. But neither was it “a joke”, as some of Knight’s defenders said. The cartoon depicted Williams as someone who needs to grow up and accept her losses like an adult. The caricature was spot on.

During her tantrum, Williams also played the now ubiquitous gender card, accusing the male umpire of deducting points from her score “because I’m a woman”, a weird complaint since his penalties benefited her opponent, another woman. It was not long, however, before Knight scored a well-earned victory when his employers refused to be intimidated by any of this and re-published the cartoon two days later, along with a front page full of other equally caustic Knight caricatures. In other words, when an international celebrity’s underhand resort to identity politics came up against the great iconoclastic tradition of Australian newspaper cartoons, the latter prevailed.

Nonetheless, the win came at a cost. Knight had to endure a barrage of online criticism, including reported death threats, and his children were subjected to social media abuse, all of which led him to shut down his own social media outlets. This was another notch in the already grim track record of clashes between our cartoon tradition and identity politics in other areas, especially in depictions of Muslims.

Before his fatal heart attack in March 2017, Bill Leak had published a number of cartoons criticising jihadist suicide bombers and radical Islamic preachers. The one that caused him most trouble depicted two jihadists checking their “cartoonists hit list” and inspecting a photograph of a male figure in a burka holding a sign saying “Je Suis Mohammed”. Leak’s reprise of the defiant French slogan that emerged after the jihadist murder of twelve people, including five Charlie Hebdo cartoonists, in Paris in 2015 saw him immediately put on a real hit list by Islamic State fighters in Syria. Leak wouldn’t believe it until Australian police showed him websites urging “fellow mujahedeen” in Australia to hunt him down and kill him. In the last collection of his work, Trigger Warning (Wilkinson, 2017), Leak wrote: “I had no choice other than to move house and start getting used to living within the constraints of extreme security measures to ensure my own, and my family’s safety.”

The artist with the longest track record in this field is John Spooner (above in the thumbnail), who retired in 2016 after forty-three years at the Age, Melbourne. Spooner has just published an impressive record of his work in What the Hell Was He Thinking? John Spooner’s Guide to the 21st Century (Australian Scholarly, 2018). It is not only a collection of some of the most memorable cartoons published in this country but the accompanying text is also an odyssey of the author’s own confrontation with events that have battered his beliefs and dislodged the once-solid ground on which they stood.

The fate of Bill Leak has not intimidated Spooner and he devotes three chapters of his book to the September 11, 2001, attack on the US, the 2003 invasion of Iraq, and the subsequent Islamic acts of terrorism around the world. The book includes forty-three Islamist-incited Spooner cartoons from this period, ranging from graphic depictions of beheadings to a pointed satire of a bunch of human rights lawyers headed by Geoffrey Robertson QC complaining that the American assassination of Osama bin Laden was “a perversion of justice”.

Along the way, Spooner recounts a number of milestones in the transformation of his own political views. The Left’s opposition to the American invasion of Iraq disturbed him. “The world seemed uninterested in humanitarian rescue. The argument was asserted that there was no immediate threat of genocide from this genocidal [Iraqi] government.” So why, he asks, was the Iraqi situation so different? “In my view, the important factor was America. Anti-Americanism is a powerful if hypocritical force.”

Moreover, the Left’s global denunciation of the American occupation, Spooner writes, only gave Al Qaeda and its radical successors an opportunity to terrorise Iraq with impunity. Everyone he knew who supported the intervention descended into helpless despair. He remembers walking past a sympathetic colleague’s desk at the Age and noticing she was crying about the hate mail she received. His disillusionment with the Left on such issues was to become “confrontingly obvious” to many of his friends and colleagues.

His despair was briefly lifted by the successful counter-insurgency strategy of General David Petraeus’s “surge” in Iraq in 2007, only to be succeeded by the subsequent emergence of Islamic State. One of Spooner’s most pungent cartoons from this period depicts two men on top of a hill digging a hole to plant a sign declaring “Peace”, but every piece of dirt they dig up is full of human bones and skulls. In my view, this one didn’t need any further explanation but Spooner decided to rub his point in with text: “Another frustrating day on the moral high ground and still no evidence to justify war”. 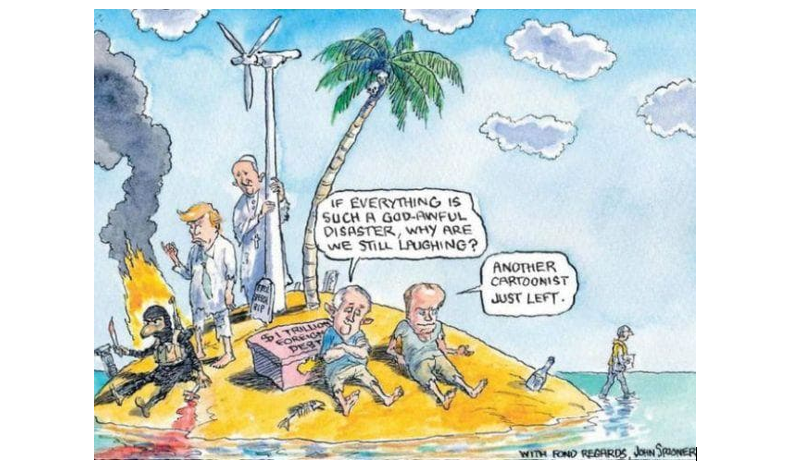 Spooner’s movement to the Right occurred at the same time as the Age moved even more to the Left, especially under Andrew Jaspan from 2004 to 2008, and is one of the recurring themes of his book. But one issue on which Spooner has not shifted ground for nearly four decades now is his opposition to what he calls neo-liberal economics. From the outset, he writes, he had grave doubts about the Hawke–Keating economic reforms of the 1980s: unilateral free trade, floating the dollar, deregulating the labour market, privatising government corporations and relaxing banking controls. He argues that the outcomes of that program have now come to pass in the form of the collapse of Australian manufacturing, the decline of important sectors of our agricultural industry, persistently high rates of unemployment and permanent debt.

The news media, he argues, now find themselves as elite spruikers for special business and political interests, such as Chinese windmill manufacturers and green activists like GetUp. Worst of all, he says, is the horrific level of national debt that no one on any side of politics today wants to talk about. No one warned us, he writes, that net foreign debt would grow from $196 billion in 1996 to $1 trillion in 2016, giving Australia the fourth-worst current account deficit in the world, and consequently the twelfth-largest net foreign debt. Australia has created an economic system that automatically creates debt as it grows, he argues, but politicians simply ignore the issue, like Mr Micawber in David Copperfield—a telling study in one Spooner cartoon—and his motto “Something will turn up”.

Spooner heaps most blame on the post-war Baby Boomer generation who were no match for the generation that survived the Great Depression and the Second World War:

They handed to the “boomers” a life of unprecedented wealth and educational opportunity. They produced an Australian industrial base, with virtually no national debt. The boomers squandered this inheritance. A combination of hedonistic indulgence, radical experiment and egotistical indifference to consequence led inexorably to debt and a mad obsession with utopian transformation, mythical free markets and renewable energy.

Spooner describes both the Trump and Brexit “revolutions” as the first attacks on the complacent neo-liberal assumptions of full employment, mobile labour and the neutral allocation of resources. He says the Age’s left-wing economist Kenneth Davidson was right all along about the fate of privatised public utilities. “Ken had been pilloried for insisting that they were a rort.”

Whether you agree with them or not, Spooner’s arguments here are well made and impossible to dismiss with a wave of the hand. This is true of his other chapters on global warmism (doesn’t believe in it), euthanasia (against), Israel (for), China (against), crime and punishment (too much and too little), Donald Trump (too soon to tell) and Australian political leaders since Howard (something wrong with all of them).

Within the long, honourable and peculiarly Australian tradition of hard-edged newspaper cartooning, John Spooner has marked out his own distinct ground.

The Majesty of the Law