Engineers commonly subject new materials or designs to stress tests. This is done in order to discover their breaking points. One of the most celebrated such tests, and certainly the most public, was conducted eighty-one years ago at a building site in Racine, Milwaukee.

Frank Lloyd Wright cared little for convention, dropping out of university after just one year before establishing himself as an architectural great—always in the absence of a formal architectural licence. In 1937, planning the construction of a new headquarters for the S.C. Johnson & Sons Wax Co, Wright literally turned convention on its head, proposing a column design that was stunningly slender at the base rather than conventionally broad. 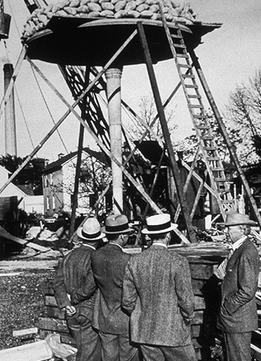 The Wisconsin Industrial Commission did not believe these delicate-looking columns could support the required twelve tons of weight, so Wright knocked together a solitary test column, placed it at the building site, and invited everybody to witness a daring feat of structural strength. If Wright’s calculations were out by even a degree, this test would end in a collapsed column and career-ending humiliation.

With the industrial commission in attendance, along with many spectators, workers began loading a platform on the top of the test column with sandbags (pictured at right). When the twelve-ton mark was reached, the workers briefly halted as Wright—clearly quite the showman—stepped forward to tap the base of the column with his cane.

Then the loading continued. Ton after ton was added to the total. This was clearly a more civilised era, as a report of the great test in the June 4, 1937, edition of the Milwaukee Journal reveals:

At 4 p.m., after 18 tons of sand had failed to crack the pillar, workmen and visitors retired to the company recreation building for beer and pretzels, a breathing spell, and a short talk by the architect. After the respite, workers, with the aid of a derrick, continued the task of distributing the weight of sand evenly across the wide top of the steel mesh and concrete post. At 6 p.m. the structure was still standing, and plans were made for continuing the test Friday, adding weight until the column crashes.

And return they did, eventually loading sixty tons onto that single column. Yet still it did not collapse, instead merely cracking at its widest point—exactly as Wright had predicted. Construction of Wright’s proposed building was permitted.

Stress tests also occur in fields outside of architecture and engineering. Jokes, mockery and satire are society’s way of stress-testing new concepts. In 1996, for example, comedienne (and now ABC radio host) Wendy Harmer applied the joke test to the idea of a particular Liberal politician defeating Paul Keating. “Can anyone imagine,” she asked, “little Johnny Howard as Prime Minister?” It emerged that many indeed could imagine just such a circumstance, and they continued imagining it for more than a decade beyond, despite daily joke tests. Howard endured and passed all of those challenges, right up until he was brought down by someone who turned out to be a greater conceptual gag than even Labor could tolerate.

Leftists, too, run their own joke tests on conservative concepts, much as Harmer did twenty-two years ago. Long may this continue. But there is an important difference between the stress-testing processes of Left and Right. While the Left’s jokes about conservative notions are widely encouraged, including being supported by the tax-funded ABC, leftists are busily trying to shut down jokes from the Right. They want to end our tests.

What else were the Australian Human Rights Commission’s attacks on cartoonist Bill Leak but attempts to silence his satire? Why else apart from fear and cowardice in the face of challenging ideas would major traditional media and social media companies marginalise conservative content and commentators? How else other than attempts at dumb censorship would anyone classify many of the Australian Press Council’s investigations and rulings?

(Note: I should admit a personal interest in the case of the Press Council. A few years ago I was investigated at some length over a complaint chiefly based on my use of this terrifying phrase: “Quite so.” The Greens actually flew a lawyer from interstate to argue the point in that little incident. More recently, a Press Council inquisition into my ABC mockery began with the following question: “Do you think the Press Council’s rules don’t apply to you?” They’re a friendly bunch.)

Just a theory, but it might be that the Left knows its ideas are vulnerable to even the slightest criticism—particularly in the form of satire—and would rather those ideas be immediately implemented prior to any possibly embarrassing tests. They might know their ideas would not support a single grain of sand, much less the sixty tons endured by that single steel-reinforced concrete column in Racine.

Frank Lloyd Wright’s beautiful S.C. Johnson & Sons Wax Co building (pictured below), completed in 1939, remains the corporation’s headquarters to this day. If you are ever in the area, please take the free tour.

Don’t worry about the building falling on your head. Like all of the best ideas, it was tested before construction. 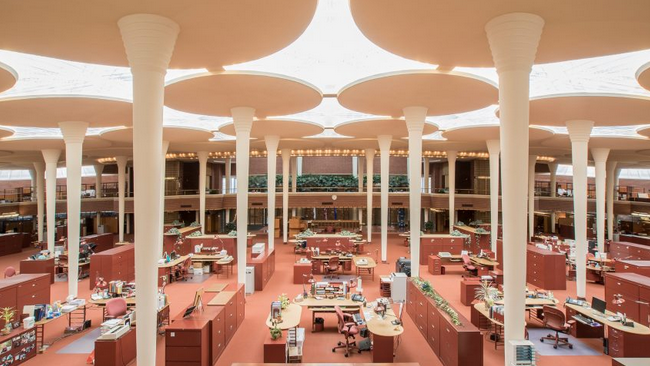