Peter Kreeft, Professor of Philosophy at Boston College, has published many works of Christian apologetics as well as works of philosophical reasoning, including a series of Socratic dialogues in which he has Socrates interrogate major modern philosophers—Socrates Meets Marx, Socrates Meets Machiavelli, Socrates Meets Sartre (all published by Ignatius Press). Kreeft’s great learning and his clear, uncompromising style make these books valuable as educational tools and a delight to read for student and layman alike. They are, in fact, a valuable contribution to our beleaguered Western civilisation.

It is fashionable among some of the less intellectual magazines to ask various celebrities who they would like as a dinner-guest. For me, Kreeft would certainly be one. The fact that he is a fellow Tolkienite deepens my feeling of spiritual kinship for him. However, having bought Socrates Meets Descartes with high hopes of more of the same, I found it fundamentally disappointing for a reason which I have found previously in conservative Christian thought.

The contrasts between Descartes and Socrates, and their points of agreement and difference, are clearly and cleverly drawn, and as far as pure technical philosophy goes, it is up to the high standards of the other books. A student who buys it for this will not have wasted his money. It is spoilt, I think, by turning into a bad-tempered attack on rationality, science, modernity and all varieties of the Enlightenment. 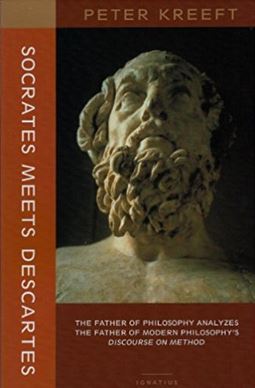 I use the phrase “varieties of the Enlightenment” deliberately. The French Enlightenment, associated with Rousseau and ideology, contributed much to state terror and totalitarianism; the German Enlightenment (Aufklarung) was associated with Goethe, Schiller and Lessing; and the British (including very much the Scottish) Enlightenment was associated with the Royal Society, empirical experiment and names like Hume, Banks, Adam Smith, Edmund Burke, Arthur Phillip (who as first Governor of New South Wales made a serious attempt to put Enlightenment values into practice), and later with Simpson (anaesthetics) and Lister (antiseptics).

These various Enlightenments were very different. Just to list this handful of names should be enough to indicate that the best of the Enlightenment—which Descartes’s thought aided, though others played a part in ushering it in—was not, as Kreeft finally suggests (“fools who pursue your dark dream on Earth”) an unmitigated evil.

Two aspects of modernity which Kreeft chooses especially to lambast Descartes with are ovens and rockets, used, according to him, solely for war and murder. Stretching a point, he identifies the gas-chambers of Auschwitz as “ovens”, which they were not. Modern ovens have probably saved large numbers of lives by allowing food to be prepared cheaply and efficiently.

The same goes for rockets: they have made possible satellite technology, with its great advances in soil-science and weather reporting, which, as well as allowing people to be evacuated from the paths of hurricanes and typhoons, has allowed the Earth to grow more food and support a large population which would otherwise have starved to death or never been born. The aggregate of years added to human life-spans by rockets and satellites is incalculable, but runs into millions or perhaps billions. At this moment satellite mapping is helping plot and control disease outbreaks in crops.

Famine has been eliminated except where it has been caused deliberately by the likes of Mugabe and the North Korean dynasty. Satellite technology has allowed the knowledge of medical advances to be distributed at a far greater speed than before.

Kreeft has Descartes, in dialogue with Socrates in the afterlife, attempt to defend the heritage of the Enlightenment by asking, “And were cures found for many diseases?” Socrates replies, “They were. But for every new cure, there seemed to be a new disease.”

That “seemed” in Kreeft’s Socrates’s answer is the sort of cop-out the real Socrates, alive or dead, would never use. And the statement is untrue anyway. Further, life-spans have gone from about thirty years (which was their average from ancient times until the Enlightenment and the Industrial Revolution) to a point where, in the developed world at least, ninety is no longer unusual.

Cataracts, which were once virtually universal among people who lived long enough, and swollen prostates, which condemned nearly every man who lived long enough to endless pain, are among innumerable conditions now cured quickly, simply and cheaply. Even the “great king of terror”, cancer, is being beaten back, and millions of people survive cancers which not long ago would have been fatal.

Dentistry can now be painless, where once the best that could be done in that direction was to have your friends hold your finger in a candle-flame to distract you from what was being done in your mouth. If you have a very strong stomach, look up on the internet Fanny Burney’s description of undergoing a mastectomy in pre-anaesthetic days 200 years ago (and that was done by Napoleon’s own surgeon, one of the best).

All this is the result of continuous, long-term scientific efforts. Childbirth used to carry the risk of a torturous death for every woman, and there was no effective birth-control. Is it any wonder that the joy of sexual experience, even within marriage, was surrounded by prohibitions and taboos?

Advances in medicine and surgery are only a small fraction of the story. Machines made it possible to do away with slave-labour and steamships meant sailors no longer had to go aloft on stormy nights to take in sail, or be blown helplessly onto the killing rocks of a lee shore. Everything from books to clothing became more widely available and longer-lasting. And what about democracy, prison reform, child-labour law reform and so on—all products of the Enlightenment in conjunction with the Judeo-Christian ethic?

Part of Kreeft’s indictment against the Enlightenment is, not surprisingly, the wars and holocausts of the twentieth century. But while Rousseau, and possibly Voltaire, contributed to the French Revolutionary Terror, and Rousseau undoubtedly to the murderous ideologies which succeeded it, it is worth making the point that the very worst ideologies—Nazism and communism—far from being products of the Enlightenment, or at least of the Anglomorph Enlightenment, were in fact reactions against it.

Hitler despised everything he knew of Enlightenment values, and Lenin and Stalin were hardly different. The ill-fated Weimar Republic—Weimar was the city most closely associated with Goethe, whose last words, incidentally, were: “More light!”—was a child of the Enlightenment, in its strengths and weaknesses, an attempted repudiation of Germany’s primitivist Griff nach der Weltmacht. The current madness afflicting so many universities, and in particular university administrations, is again contrary to the Enlightenment, and is an attempt to destroy it, not an expression of it.

In short, although the Enlightenment failed to completely fulfil the most optimistic predictions of some philosophers, and though human wickedness has perverted many of its accomplishments, it has still improved and enriched human life immeasurably. Descartes’s legacy was something far short of total failure.

Even considering purely spiritual matters, it gave many more human beings leisure and a greater chance to contemplate the transcendent, the eternal and the infinite, escaping from the stony cruelty of the continual literal fight for “our daily bread” to the possibility of a greater awareness of higher things.

Professor Kreeft’s main arguments against Descartes are that he overlooked Original Sin in his prescription for the future. Pascal appears as a character towards the end of the book, and his is the vital observation that true and pure Reason knows that there are things beyond it. This is true. It is something we should never lose sight of when contemplating utopias, but to attack the whole heritage of the Enlightenment because of it would be to throw the baby out with the bath-water.

And yet, having said this, a worm of doubt creeps into my mind: have the benefits and comforts of the Enlightenment made us, Eloi-like, too morally and physically soft and materialistic to defend ourselves or to survive? I think of Poul Anderson’s The Winter of the World, set in a future ice age: life is hard, many of our values are gone, but people have grown harder and stronger too.

Among Hal G.P. Colebatch’s books is Fragile Flame: The Uniqueness and Vulnerability of Scientific and Technological Civilization, published by Acashic

Eyes Upon Some Inner Thing