In this column in May, I observed that the humanities faculties of public universities throughout the English-speaking world have now been so comprehensively captured by the Left that they leave students of a conservative disposition completely out in the cold. At a recent book-signing event, the English philosopher Roger Scruton observed a stream of young conservative undergraduates who were in despair. “Where do we turn for comfort,” they asked, “when our reading lists are gibberish about which we can understand only that it is all left-wing? Is there no network, no secret society, no alternative reading list to get us through the next three years?”

Well, there is an alternative reading list for the student with enough own-time and determination to look. It is called the great canon of Western literature. It once formed the bedrock of university degrees throughout the English-speaking world, but has now been largely expunged from the lecture theatre. Nonetheless, in Australia we are fortunate to have a new, homegrown addition to our samizdat canon which articulates the conservative political tradition in a way no one has succeeded in doing so well before. It deserves not only to become obligatory reading for conservative students looking for rescue from their dismal academic surroundings but for anyone wanting a definitive analysis of this side of politics.

The book is Abbott’s Right: The Conservative Tradition from Menzies to Abbott, written by the legal and political philosopher Damien Freeman and published by Melbourne University Press. Although it is likely to be regarded by anti-conservative writers merely as a partisan contribution to the current contest for leadership within the Liberal Party, Freeman’s book is a refreshingly clear and illuminating account of what it takes to be a genuinely conservative political figure in this country. At less than 200 pages, it is also thankfully brief, yet as it goes along it contains enough summaries of its arguments to make its best points enduringly memorable.

The book takes on the most difficult issue in selling conservatism. The last two centuries have been a time of rapid social change, which naturally raises the question of why a political position commonly seen as dedicated to maintaining the status quo still deserves to be taken seriously. As the pace of change accelerates, don’t those who welcome the new have a much better understanding of what is happening than those who still cherish the old? 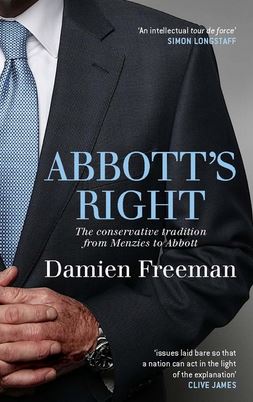 Freeman distinguishes between conservatives and reactionaries, arguing that the former are not against social change and, indeed, ultimately foster the best kind of progress possible. He quotes Benjamin Disraeli, the nineteenth-century British Conservative Prime Minister, in a speech he gave during the campaign over the 1867 electoral Reform Act:

In Australia, Freeman uses this distinction to show the difference between conservatism based on the traditions of a people and liberalism derived from abstract principles and general doctrines. He embeds the distinction in a discussion of the different political positions of some of the leading figures of the Liberal Party since the Second World War.

He argues the liberalism of Malcolm Fraser was the abstract and general variety. The most fundamental of the Liberal Party’s beliefs, Fraser said, “is the right to freedom to choose”. From this basic position came his commitment to a private enterprise economy and the free competition of ideas, and his opposition to socialism. The power of the state, Fraser said, must be limited in the interests of promoting the freedom of the individual. Fraser also claimed his government was conservative, in that it stood for conserving “a framework of stability, continuity and order”. However, Freeman argues that while Fraser was philosophically committed to liberalism he was only committed to conservatism as a matter of contingency or political opportunity.

He contrasts this with the conservatism of Tony Abbott, which he says is an inversion of Fraser’s position. Addressing the National Press Club in 2014, Abbott endorsed the Disraeli position that “change is to be welcomed, provided it’s change that accords with the best customs and traditions of our people”. While freedom had a prominent place in liberalism, Abbott argued, this was not because it was some fundamental principle but because it was one of the values the Australian people prized most.

In other words, for Abbott the commitment to liberty is anchored on the primary commitment to tradition. Freeman quotes from an article of Abbott’s where he says freedom “cannot be systematised or converted into an ideology without losing the human context in which its appeal is most deeply felt”. Although liberty commanded “the broadest loyalty and widest sympathy” among Liberal Party members “it is not the only one and cannot always prevail”. It is Abbott’s non-ideological commitment to personal freedom, Freeman argues, that best fits the context of the Australian tradition.

But isn’t this purportedly non-ideological position simply another system of ideas, that is, a political ideology in disguise? The great strength of Freeman’s book is his answer to this charge. He presents Abbott’s approach to public policy-making in the tradition of Edmund Burke, the eighteenth-century Irish author and Whig member of the British Parliament. Freeman also claims that much in the political legacies of Robert Menzies and John Howard derive from Burke’s influence too. Burke’s political approach, Freeman insists, is not ideological. Burkean conservatism is more a “cast of mind” than a philosophical system.

It has regard to the values embedded in a country’s tradition, rather than the values espoused by a theory. “When tradition serves as a guide,” Freeman writes, “the need for doctrinal purity is avoided.” This means a pragmatic approach can be adopted to the range of values found within the tradition, and the ways in which the competing values have been reconciled over time. What’s more, Freeman observes, tradition is capable of embracing new vales that are compatible with those embedded within the tradition. So it is, he argues, that tradition provides conservatives with the most effective political options:

If you are looking for a philosophy or an ideology for policymaking you are likely to find conservative public policymaking chaotic. The deepest insight of the conservative is, however, that you cannot govern by imposing ideas on a people. You have to govern in conformity with the temper of the people. This requires policymakers to adopt the right cast of mind.

Abbott himself describes this approach as “pragmatism based on values”. Freeman devotes a chapter to showing how Abbott applied this idea in a variety of social policy contexts while a minister in the Howard government, including mutual obligation and work-for-the-dole in employment services. In health policy, he defended Australia’s “mixed system” of Medicare from pressures within both government and bureaucracy to emulate more internally consistent systems, like that of either the American free market or British central planning.

I was disappointed, however, to find the book lacked a proper discussion of what I still consider the two most valuable contributions Abbott has made to public life: his persistence in calling attention to, and eventually solving, the crisis in border protection brought about by the irresponsibility of the Rudd and Gillard Labor governments, and his response to Islamic terrorism when, as Prime Minister in May 2014, he substantially increased funding to Australian intelligence services, after Gillard had presided over their decline by nearly 40 per cent in her time in office. Abbott’s new funding package was backed by legislation for increased surveillance of radical groups and restrictions on the advocacy of domestic and foreign terrorism, both of them the only effective domestic anti-terrorism approaches we have yet devised.

The last of these included a National Security Amendment Bill which, among other things, protected the secrecy of special intelligence operations from being publicly exposed. Even though he and his government were pilloried by the news media on libertarian grounds for introducing this bill, Abbott was right to do so. The subsequent prevention of several major terrorist acts on Australian soil has now confirmed this beyond doubt. It should not be forgotten that these critical security decisions owed nothing to the libertarian sentiment within Australian liberalism, and a great deal to the Burkean legacy within Australian conservatism.

The UN’s Assault On Our Sovereignty