The appearance and success of the film Dunkirk have added to the list of war films that are both impressive and harrowing, but the film has not done much to explain the significance of the episode. Indeed, precisely because of the film’s overwhelming focus on the beach and on the immediate military conflict, there is a failure to consider the wider military context let alone the political one.

In 1940, the world was provided with its greatest geopolitical crisis of the last century, one that was even graver than that in 1917-18, serious as that was. In 1918, the Treaty of Brest-Litovsk between Germany and Russia posed the threat of a new alignment, one that would enable Germany to turn all its efforts on the Western Allies (Britain, France and the United States), while Bolshevism was able to establish itself with German help. In January 1918, Arthur Balfour, the British Foreign Secretary, suggested that the Allies help anti-Bolshevik movements in Russia that “might do something to prevent Russia from falling immediately and completely under the control of Germany … while the war continues a Germanised Russia would provide a source of supply which would go far to neutralise the effects of the Allied blockade. When the war is over, a Germanised Russia would be a peril to the world.” The challenge was not ended by the close of the war. Indeed, in July 1919, the British General Staff argued, “taking the long view, it is unquestionable that what the British Empire has most reason to fear in the future is a Russo-German combination”.

The threat recurred in 1940, but in a more acute form. By the end of 1939, Germany was allied with Japan, Italy and the Soviet Union, and had co-operated with the Soviet Union in conquering Poland and determining spheres of influence in Eastern Europe, which left the independent states there with few options. The United States was neutral. Britain and France, while supported by their mighty empires, were reduced to dubious hopes of long-term success, in particular through a blockade that was in practice not going to work due to the Russo-German alignment.

This essay appears in the current edition of Quadrant.
Click here to enjoy a subscriber’s early access

German successes in early 1940, first against Denmark and Norway, and subsequently against the Netherlands, Belgium, France and Britain, were a product of the existing geopolitical situation, because Germany was able to fight a one-front war and thus maximise its strength. In short, Stalin was the root cause of the German triumph in the West in 1940. In 1939, by allying with Hitler, Stalin had followed Lenin in 1918 by joining the cause of international communism to that of state-advancement in concert with Germany.

This process was greatly facilitated by a shared hostility to Britain and its liberalism. This hostility stemmed from a rejection of liberal capitalism as a domestic agenda for liberty and freedom, but also hostility to it as an international agenda focused on opposition to dictatorial expansionism. Just as Britain had fought to protect Belgium in 1914, and had intervened in favour of Estonia and Latvia in 1919-20, so it went to war in 1939 in response to the invasion of another weak power, Poland.

The past rarely repeats itself, as comparisons between the German offensives in 1870 and 1914, and 1918 and 1940 indicate, or, indeed, between the Russo-German combination in 1939–41 and more recent relations between the two powers. German success in the field in 1940 owed much to the serious deficiencies of French strategy and planning, especially the deployment of mechanised reserves on the advancing left flank so that, in practice, they were not available in a reserve capacity, and, linked to this, the absence of defence-in-depth. French failures magnified German efforts at innovation, efforts which were subsequently in the war to be revealed as inadequate against defence-in-depth.

And so to Dunkirk. The problem with war is ultimately that of forcing opponents to accept your will. That is the outcome sought. Output, the “boys and toys” of killing and conquest, is important to the process, but only if linked to a political strategy that will deliver the outcome. That strategy involves maximising international advantages, as the Germans did in 1939 and continued to do in 1940 with Italy’s entry into the war, and dominating the political agenda of your opponent’s society. 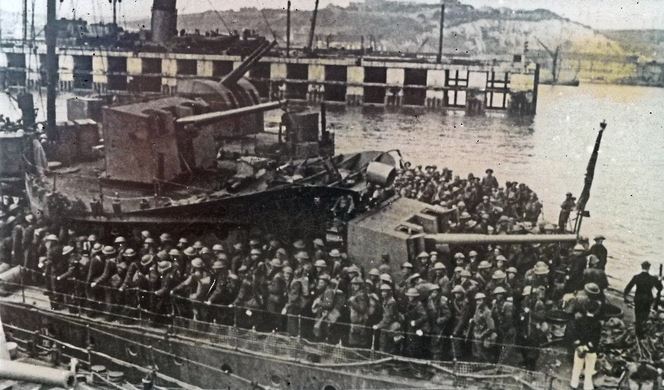 British troops arrive in Dover after the evacuation.

There is no inevitability about either process. In particular, in 1940, Germany proved far more successful with France than with Britain in this respect. Many French troops fought bravely, notably at the Meuse, Somme and Aisne, and also at Lille, a key position in protecting what became the Dunkirk defensive perimeter. However, the necessary political will to fight on, while displayed by the Free French under Charles de Gaulle, was largely absent. With the Commander-in-Chief, General Maxime Weygand, critical of the political system and pressing for an armistice, and Marshal Henri Pétain, the Deputy Prime Minister, also pessimistic about the future and opposed to fighting on, the cabinet, on June 15, agreed to find out what armistice terms the Germans would offer.

This sold the pass. There would be no union with Britain, no attempt to mount continued resistance from a Breton redoubt, no guerrilla warfare, no retreat of the government to the North African colonies from which they could have continued defiance.

This collapse was of global significance. French control of Syria, Lebanon, Madagascar, French North and West Africa, and French Indo-China created the possibility of German and Japanese penetration into the Middle East, Africa and South-East Asia. The aircraft that sank British warships off Malaya in 1941 operated from bases in Indo-China.

This collapse also made the British decision to fight on of greater significance, and also far riskier. German naval and air forces could now be moved much closer to Britain. German hope for a negotiated settlement with Britain reflected the difficulties of invasion but also Hitler’s interest in war against the Soviet Union. Redressing the 1919 Versailles peace settlement was at best a tactic for Hitler, as was co-operation with Russia in 1939–41. The ideo­logical thrust of his policy would be served by a peace by which Britain retained its empire in return for accepting German dominance of the Continent.

There was interest in Britain in a compromise peace, but it was pushed aside by Churchill. In part the weakness of the far Left was an element. Left-wing trade unionists looked to the example of Stalin, but communism was relatively weak in Britain, while both the Conservatives and Labour were characterised by robust patriotism.

The ability to save so much of the army from Dunkirk was important. It created an impression of heroic resilience, but also ensured that there were not, as there might otherwise have been, a quarter of a million prisoners to provide as it were German hostages.

Evacuations are one of the most difficult military activities. They are a form of combined operations, always problematic, but one in which the other side has set the agenda. They are also strategic, an element not really captured in the recently-released film. You withdraw in order to fight again. This is a key element in military history, one that at sea is best handled by powers with a strong amphibious capability. The ability to withdraw after failures on land, for example from Germany in 1796, Holland in 1799, Corunna and Walcheren in 1809, and Gallipoli in 1915, was important. It became even more difficult to do so in the Second World War due to hostile air power, and this was a major factor at Dunkirk and at Crete in 1941. Nevertheless, in each case, large numbers were withdrawn. A failure to evacuate could be a disaster, as with Singapore and the Philippines in 1942 and, for the Germans and Italians, Tunisia in 1943. Each reflected the local superiority of opposing sea and, in particular, air power. As a result, large numbers of men were lost.

In the event, 338,226 men were successfully evacuated form Dunkirk. Lots of equipment was left behind, but it was replaced. Survival was enough, a point mentioned in the film’s dialogue.

The film is notable for not hiding Churchill’s comment that it was a military catastrophe, but that was not the key element. There was the important effect on domestic morale, notably the realisation that everyone, even those who messed about in boats, could do something useful. The voices urging Britain to seek terms with Germany would have been a lot louder if Britain had lost its army. Moreover, German confidence would have been higher, and this might have encouraged the Germans to stage the invasion had there been no negotiations.

Mass had a value of its own, at sea, on land and in the air. The mass of troops available, thanks to Dunkirk and other evacuations, despite defeat in France, to help protect Britain from invasion, was important. So was the size of the navy that survived having taken part in the evacuation. Only six out of forty-one destroyers were sunk. The Royal Navy took much less damage in evacuating Dunkirk than the Germans had done invading Norway that April: ten German destroyers had been destroyed at Narvik, the heavy cruiser Blücher in Oslo fjord, and so on. This was highly important as far as the invasion was concerned, and offset some of the advantage Germany gained in winning the support of Italy and taking France from the British side. Moreover, as the Germans advanced, 170,000 tonnes of French warships in construction, including the cruiser Joffre and the battleship Clemenceau, were sabotaged.

The film contains errors, not least failing to note the significance of the East Mole for the evacuation, to explain the role of the weather, and to emphasise that most of the troops were evacuated by warships, mostly from the East Mole. In contrast, the Little Ships, the occasion of another fine recent film, the intelligent romantic tragic comedy Their Finest, lifted about 5 per cent at most.

Dunkirk is very well acted. It is vivid, ably shot, and brings in land, sea and air, co-ordinating the three very well. Shot on the beach used in 1940, the film captures the difficulty of the task and the fortitude involved. Withdrawal is particularly difficult for troops who do not know what is going to happen, but can clearly hear the menacing sound of approaching foes. That was certainly the case with the Dunkirk perimeter which was under serious attack and bombardment.

Inevitably the film has been drawn into controversy. Le Monde has complained that the role of the French is underplayed, which possibly is not the wisest of approaches, not least given the obvious contrast with political standfastness in response to German offensives in 1914, 1916 and 1918. A friend e-mailed me: “The greatest tragedy of the narrative that we have created nationally for ourselves regarding Dunkirk and the Battle of Britain and indeed WW2 as a whole … it has contributed to our inability to be a true team player in the European context.”

This opinion is but part of a wider argument that the British live in the past and say too much about “the war”, an argument then somehow linked to support for Brexit. That, however, is to run together many different elements. First, history is in part the trust between the generations, and that is very much seen with memorialisation and commemoration. Second, in 1940 the British did act in a fashion that was significant (to them and others) and impressive. Third, the Brexit vote reflected a wide range of factors, the vast majority of which had nothing to do with “the war”. Go and see the film. It is impressive.

Jeremy Black is Professor of History at Exeter University and the author of over 100 books, many of them on military history

The Eternal Quest for Justice

Cinema for Adults, Now and Then

The Two Films of Gaslight