Where Fashion, Art and Celebrity Clash

In 2012, Karl Lagerfeld—that inimitable connoisseur of detachable collars and snakeskin gloves—told Britain’s Telegraph, “I am against museums and exhibitions in fashion. One woman said to me—‘In my world, the world of art’—so I said: ‘Oh, don’t you make dresses any more?’ … If you call yourself an artist, then you are second-rate.”

And yet, the worlds of fashion and contemporary art are more closely aligned than ever before. Recent years have witnessed the opening of large-scale contemporary art museums by two major fashion houses—the Fondazione Prada in Milan and the Fondation Louis Vuitton in Paris. Designer-artist collaborations are increasingly commonplace—from Nicholas Kirkwood and the Keith Haring Estate, to Louis Vuitton and Yayoi Kusama. Meanwhile, the rise of the “fashion blockbuster” continues unabated. London’s best-attended exhibition of 2015 was Alexander McQueen: Savage Beauty at the Victoria & Albert Museum, with almost half a million visitors. In Australia, the National Gallery of Victoria has been a keen proponent of this trend. Following the commercial successes of The Fashion World of Jean Paul Gaultier (2014-15) and 200 Years of Australian Fashion (2016), the NGV’s latest offering is Viktor & Rolf: Fashion Artists, featuring the works of Dutch designer duo Viktor Horsting and Rolf Snoeren.

As its title would suggest, the exhibition is firmly premised on the assumption that fashion is art. Of course, fashion and art are governed by the same paradox: they are both concerned with material objects of intangible significance. A Birkin is not just a bag, in the same way as the Venus de Milo is not just a lump of stone. This is not to suggest for a moment, however, that the two objects are culturally equivalent.

In several important respects, fashion and art differ substantially. Fashion is defined by its “wearability”—it is constrained, to a large extent, by the contours of the human body. The visual arts do not face this limitation, nor can they be said to have any implicit or universal purpose. Since everyone wears clothes, fashion is more or less inescapable: one can be prosecuted for public indecency, but not for being a mere philistine.

Viktor & Rolf: Fashion Artists
is on display at the National Gallery of Victoria, Melbourne,
until February 26

There is also the matter of time, since art museums notionally preserve objects for posterity. As the Latin goes, ars longa, vita brevis (art is long, life is short). Fashion is transient by definition. It is not designed for static display—fashion is made to be worn; lived in, moved in. 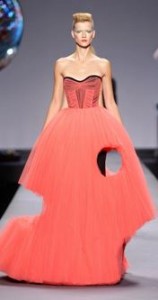 Viktor & Rolf’s status as “fashion artists” is largely founded upon their exquisite works of haute couture. As they maintain, “couture is like a laboratory to experiment and look for the boundaries of what fashion can be, and we think fashion can be so much more than a parade of dresses. So why can it not be art?” Viktor & Rolf’s decision to focus almost exclusively on couture—having ceased to design ready-to-wear collections since 2015—is highly unorthodox in the current era of “fast fashion”. For the few fashion houses that still bear the relevant accreditation, haute couture is a considerable indulgence which must be subsidised by the sale of fragrances and accessories. Viktor & Rolf would routinely invest many hundreds of hours in the creation of a single couture garment, only to have it worn for ten minutes—or however long it takes to get down the runway.

The fashion exhibition thus affords couturiers the opportunity to cultivate further appreciation of their practice. It might also make the exceedingly rarefied world of high fashion appear a little more PC. As Viktor & Rolf observe:

The great thing about showing it in a museum is that it’s much more democratic, you can address a different type of audience and also really focus on the craftsmanship that’s involved in making the collections. It enriches the way fashion in general can be appreciated.

The first room of the exhibition is dedicated to Viktor & Rolf’s breakthrough “Russian Doll” series of Autumn/Winter 1999. Upon its first showing, the designers jettisoned the conventional catwalk format, positioning the model, Maggie Rizer, atop a rotating circular platform. Initially only a modest dress of roughly hewn jute, Rizer’s outfit became increasingly outlandish as the designers added layer upon layer of adornment. The series culminated in an enormous cocoon-like cloak rendered in stiffened jute and silk. This descent into caricature played upon the wilful absurdity of high fashion, with its insatiable appetite for sheer luxury and excess.

Viktor & Rolf’s whimsical sensibility is often coupled with a darkly ironic sense of humour. The Autumn/Winter 2014 collection, “Red Carpet Dressing”, took its subject quite literally: models were bedecked in elaborately prepared floor coverings of crimson and scarlet. Coinciding with Kanye West and Kim Kardashian’s appearance on the cover of US Vogue, the series pointedly alluded to the encroachment of celebrity culture upon high fashion. 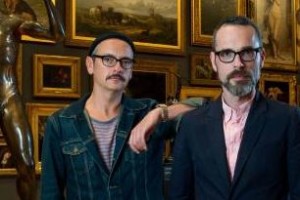 Also on display is a tweed coat from the designers’ ready-to-wear collection of Autumn/Winter 2008. It’s not any old thing, however—the word “No” projects outwards across the garment’s chest and shoulders, with dramatic effect. As Viktor & Rolf (right) explained at the time, the series represented a negation of mindless consumerism, its launch coinciding with the onset of the GFC: “We love fashion, but it’s going so fast. We wanted to say ‘No’ this season.” One suspects this particular garment might prove handy as a means of warding off unsuitable company at social gatherings. But the collection also revealed the ambivalent nature of the designers’ attitude towards their craft: a strong preference for creation over mere production. This fear of becoming a slave to one’s own talent appears to be shared by artists and designers alike—one need only consider Arthur Boyd’s Caged Artist series of the 1970s. American designer and film director Tom Ford recently confessed to the Guardian, “I’m conflicted about what I do”, citing the disparity between his rustic upbringing in West Texas and his subsequent career in fashion as “a world of great privilege, very materialistic, a world in which materialism is supposed to make you happy”.

Viktor & Rolf’s most recent showing, “Haute Vagabonds”, may be seen to address the fundamentally derivative nature of art and culture in the postmodern era. Studio offcuts and “found” garments were used to construct a playfully dandyish aesthetic, reminiscent of Vivienne Westwood in her prime. Discarded sweatshirts merged with voluminous peplum frills of silk and tulle; mismatched buttons and woven patchwork adorned cropped trousers of denim and tweed. The detritus of late capitalism had yielded something delightful in its kookiness.

The exhibition’s most surprising feature has been saved for the final room. In a darkened theatrette, an automated catwalk show is staged every fifteen minutes by a porcelain doll dressed in replica versions of Viktor & Rolf designs. This droll display serves as a reminder that in a world of artifice, one can’t afford to take oneself too seriously. 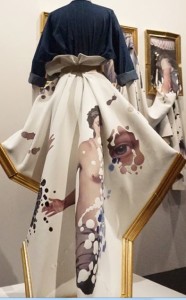 Nevertheless, a few aspects of this exhibition may provoke mild discomfort. For starters, the Viktor & Rolf logo is everywhere, contributing to the impression that this show amounts to an especially sophisticated form of advertising. The exhibition shop is particularly prominent, steeped in the scent of “Flowerbomb”, Viktor & Rolf’s signature perfume. One of the show’s principal sponsors is the Chadstone Shopping Centre, that gargantuan purveyor of designer stuff in Melbourne’s eastern suburbs.

One can’t help but conclude that if fashion is art, then art has become fashion, too—what with the rise of global mega-collectors, trendy private museums, and celebrity “factory artists” like Jeff Koons and Ai Wei Wei. In his Notes on the Death of Culture, the Peruvian Nobel laureate Mario Vargas Llosa writes that “in the civilization of the spectacle, intellectuals are of interest only if they play the fashion game and become clowns”. While it is tempting to view this exhibition in this vein, Viktor & Rolf’s steadfast commitment to haute couture would imply they are not willing to “play the fashion game” to its fullest extent. These garments are the result of genuine inspiration and painstaking human finesse. Ultimately, high fashion must be distinguished from the “celebrity culture” that threatens to engulf it. It may just be that dressmaking represents, as Christian Dior once put it, “one of the last refuges of the human, the personal, the inimitable”.

Where Fashion, Art and Celebrity Clash

Bits and Pieces of the Living Past