Quick-Draw Capers at an H-Bomber Base

At the height of the Cold War, RAF electrician Kevin Durney used to work, eat and sleep in one-week stretches alongside two Canberra bombers, each loaded with a one-megatonne American H-bomb. The planes were ready to go at fifteen minutes’ notice.

He and his older brother, Blaise, were at the RAF’s 3 Squadron base at Geilenkirchen in West Germany near the Dutch border. Kevin, now seventy-three, did aircraft electrics there from 1963 to 1966; Blaise, now seventy-six, did ground electrics such as equipment and runway lights from 1962 to 1965. They’re both retired, Kevin in Perth and Blaise in a retirement village near Essendon. I got their story because Blaise and I play social tennis.

The Canberras were kept under adjoining huts like carports. “The B28 H-bomb (below left) filled the bomb bay. We could see the lower fin sticking out,” says Kevin. “Only the Americans had the code to arm them.”

Ten other Canberras in the squadron could in theory be loaded with an H-bomb within half an hour. During the Cuban crisis in October, 1962, the regimental sergeant mustered the men.

“He was six-foot-six and he had a handlebar moustache and he could throw his voice right across the parade ground. He told us, ‘All right, you horrible lot! The VIPs are in their underground bunkers. You lot are unimportant. At any moment the Russians may lob missiles on this base. You will get no notice or chance to say goodbye to your families. You will all be dead.’” 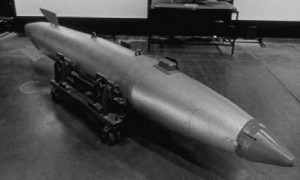 Blaise says he was annoyed because technicians like himself had done all the electrical servicing of the equipment down below. The briefing didn’t improve morale, but the sergeant was just being realistic. Did they worry about the H-bombs? “Never gave it a second thought,” the pair agreed. Kevin: “We were about twenty-one. We just had a great time, the best time of our lives.”

Blaise adds, “Of course, we remember the good times, not so much the RAF crap we had to put up with.”

Kevin’s real fear concerned the pairs of American guards, called “Custodians”, who guarded the H-bomb on each Canberra. The Custodians rotated in four-hour shifts. There was a painted white line at the entry to the bombers’ huts. This marked the “No Lone Zone” boundary, meaning no person could cross alone. If one did, the Custodians would use their sub-machine guns. Pairs of base workers could cross, but the guards would follow one pace behind.

The brothers agreed, “Those guys were crazy!” Bored and getting through piles of Playboys, the guards played a little game while doing escorts. They wore a loaded pistol on each hip, à la General Patton, in specially cut-down holsters. They practised quick-draws on their escortees, making Kevin sweat. “At Bruggen base near us, we heard they killed one of their own guys,” he says.

“During alerts we’d be issued with .303s to protect the base, but the magazine was bandaged with Sellotape. It would have taken us five minutes to unwrap the bullets.”

The base’s three squadron commanders each happened to have female-sounding names—Carroll, Adrian and Gene. “At monthly parades, with drawn swords, they’d greet each other in cut-glass accents with, ‘Hello Carroll!’ ‘Good morning, Gene!’ and we’d snicker. They never understood why.

“We hated Carroll, he was so vain. He had a little dog called Dudley. Dudley had a hard time because any chance we got, we’d give him a kick up the arse.

“One time Albert, one of our dog handlers, stopped Carroll for ID when he was walking down the tarmac smoking a pipe. ‘God, man! Don’t you know me? All those planes are mine!’ Carroll said.

“Albert said, ‘Sorry, you’ll have to get in the Land Rover and I’ll take you for identification.’

“Carroll went to get in the front seat but the German shepherd was already there and went ‘Grr!’ at him, and made him leap into the back seat. Albert drove him to the flying officers’ blockhouse, which was a shambles—they were all fed up and boozing. They leapt up as if they were spring-loaded.

“‘Tell this blithering idiot who I am!’

“‘Corporal, if my men can be half as efficient as you are, I’ll have a good squadron, but don’t you ever cross me again!’”

Blaise’s wife, Shirley, was also on the base, working as assistant to the commander and with a higher security clearance than Blaise. She knew when there would be a practice alert; he didn’t. He might propose a romantic dinner out followed by the movies and she would go along with it, although aware of an alert scheduled for 8.30 p.m. However, Blaise says the Germans on the base somehow always got wind of the alerts and would tip him off.

The Canberra’s huts were next to an entry guardhouse, a blockhouse for crew living quarters, and a surrounding pair of fences, with guard dogs trained to lope around between the fences. The inner fence was electrified.

The area was floodlit all night. Ground crews lived on-call in the blockhouse for seven days straight, waiting for an alert. “We played cards and did silly things. Our sport was indoor croquet,” Kevin says.

When a “Quick Readiness Alert” siren went off, ground crew would plug in the auxiliary starters, take the chocks away, and the planes would taxi twenty metres to the first runway gate. Kevin says, “I’d go out under escort with my key and open it. The plane would then sit between the gates idling. We knew that if someone else got the call to open the second gate, it was for real. We were always told to ‘stand down’, then the Canberras got towed back.”

The real thing would be a suicide mission for the pilots, because the H-blast would take the Canberra down with it. Kevin says, “They were supposed to use LABS—low altitude bombing system—flying in really low, and spiralling upwards at the target. A ram would push the bomb out sideways and they’d roll over and try to race away from the shock wave.

“For practice, our other ten Canberras (right) would suddenly come down the strip and get ready to be loaded up with H-bombs from the armoury. Each bomb weighed about a tonne.

“Nato had a line of bases from Turkey through Italy and France all the way up to Norway. We were just one British base. The other four were Wildenrath, Laarbruch, Bruggen and Gutersloh, the same as ours, a couple of hundred miles away. And this was just the Brits. The Germans, the Italians, the Belgians, the Dutch, six squadrons of Canadians, even the Greeks, they all had planes on alert with the American H-bombs. The French had the same deal, but de Gaulle later told the Americans to get all troops off French soil forthwith.” (The Secretary of State, Dean Rusk, made the famous reply, “Does your order include the bodies of American soldiers in France’s cemeteries?”)

Blaise says, “The aircraft of the Nato countries would often drop in on our base. They were all compatible so I knew what to expect regarding power supplies, servicing, fuels and so on.”

Nato and the Soviets teased each other with overflights, monitoring fighter responses, Kevin says. “Near us we had some little Pembroke twin-engine prop planes. They would cut an engine and accidentally wander into East German space taking photos. A couple of fighters would arrive and the pilot would re-start the engine and scamper back.”

The base had twelve Canberras (3 Squadron) and two squadrons (5 and 11 Squadrons) of Gloster Javelins, twenty-four delta-winged fighters billed as “all-weather interceptors”. In reality, they were the biggest rubbish in British aviation—in heavy rain they couldn’t even take off, Blaise says. “Our response time was pathetic, but the Americans were right on the ball.”

One morning a Javelin ran off the runway on landing, skidded through the crash barriers and up-ended itself on the Dutch side of the border—while carrying a full load of live missiles. The two crew escaped with bruises and Dutch civilians took them to a pub. They were having their first drink to settle their shaky nerves when two Dutch customs officials arrived (this was before the Common Market) and demanded, “Have you any goods to declare?” Blaise says they might at least have asked if the airmen needed a doctor.

Blaise often had to go out in bad weather to fix floodlights and runway lights. “In one blizzard the two guards didn’t want to go out with me, so they said to their German shepherd, ‘Go, boy!’ and he escorted me instead. I was crouching down trying to get the waterproof cover off, with my torch in my mouth. My British woollen gloves were useless and my fingers were frozen. All the time, this dog was inches from my face snarling at me.”

The Yanks were on a dream wicket in Germany, Kevin says. “Their pay was double ours, they got cheap tickets for Paris nightlife, they could buy cars not just duty-free and discounted but flown over free. Their camps had bowling alleys, movie theatres, dance halls that converted to ice rinks. Back in the States they’d be worse off, so lots volunteered to stay in Germany for extra terms.”

Blaise: “Brits’ conditions were really poor. If you got sent home injured, there’d be raffles and charity drives to look after you. The idea was that you’d been privileged to serve Queen and country.” Of course, he adds, the Brits in turn were far better off than the Soviet forces across the border in East Germany freezing in their trenches, ice and slush.

After ten years with the RAF, Kevin moved to Perth, where he eventually ran his own successful business, KD Instruments, before retiring in 2001. Blaise came to Australia in 1967 and served twenty-one years with the RAAF Reserve.

Australia taught them the folly of British class distinctions. Kevin: “RAF officers and men didn’t mix, we lived in parallel worlds. At one base, officers in chairs would watch a film while we had to watch it in reverse from the back of the screen.”

Blaise went back for a Battle of Britain anniversary four years ago, and at the Duxford air museum, when they found he’d been a flight sergeant, they took him into a volunteers’ lounge room exclusive to former sergeants and warrant officers. “In Australia they never kept up such distinctions,” he says.

The British left Geilenkirchen in 1968 and the Germans converted it for Pershing theatre nuclear missiles, again with the US controlling the warheads. Today the base runs early-warning (AWACS) aircraft. The Cold War is long over, but the US still has about 500 nuclear bombs in Western Europe.

In the November issue Tony Thomas wrote of being wooed by Soviet spies in Canberra. He blogs at No BS Here (I Hope)