The Meaning of Anzac Day 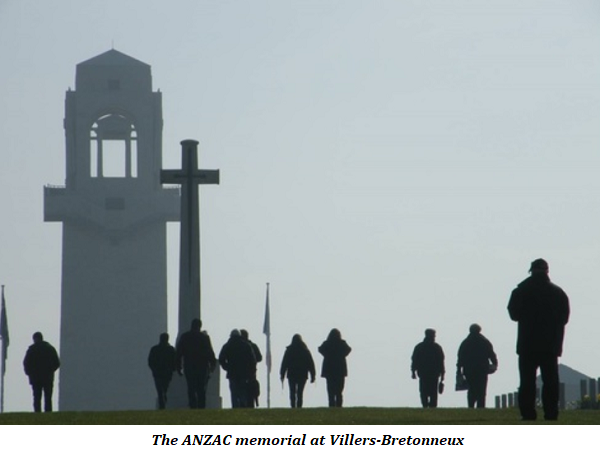 What passing bells for these who die as cattle?
Only the monstrous anger of the guns.
Only the stuttering rifles’ rapid rattle
Can patter out their hasty orisons.
No mockeries for them from prayers or bells;
Nor any voice of mourning save the choirs—
The shrill, demented choirs of waiting shells;
And bugles calling for them from sad shires.

This excerpt from Wilfred Owen’s “Anthem for Doomed Youth” makes up the best-known lines from any war poem in the English language. No war has produced as many wonderful poets as the First World War among the English; not in any language. In an age of censorship, before there was television, before Twitter, they captured for us the “pity of war”; “the pity war distilled”.

The number of casualties in the First World War was apocalyptic: 17 million people died, of whom 10 million were soldiers. Australia then had a population of four and a half million, from which at least 61,000 soldiers were killed. Only New Zealand suffered a higher death rate per population than Australia; the two countries most distant from this European conflict.

What are we Christians doing as we participate in these ceremonies? Probably every older town in Australia has its First World War memorial. I myself have celebrated nearly every Anzac Day since we gathered as boys before the honour roll at my school. Crowds are bigger than ever now; many of them young adults.

First of all we should make it clear that we are not glorifying war. While I, and most Christians, believe a just war is possible, we are compelled by the evidence to insist that war is always terrible.

We are not questioning, much less denying, Wilfred Owen’s description of the young soldier, gassed and dying: “guttering, choking, drowning”, “white eyes writhing in his face”. All in all, a true-to-life nightmare, “Obscene as cancer, bitter as the cud of vile incurable sores on innocent tongues”.

We are not glorifying war. But we are acknowledging our past. The new Commonwealth of Australia was literally an adolescent when the Great War began in 1914. Loyalty to the British Empire, youthful idealism, enthusiasm and naivety were real and strong forces. No Australian soldiers were conscripts and no Australian (or New Zealand) deserters were shot. All this is honourable and worth remembering.

We are also paying tribute to brave men, hundreds of thousands of them, first of all Australians and New Zealanders, but all those who fought; not just the 100,000 Australian soldiers who have died in wars since Federation; but our opponents too. Honourable opponents like the Turks who were defending their homeland, who are represented here today and who co-operate in and facilitate the annual ceremonies and regular visitors to Anzac Cove.

As Christians, those who believe in life after death, we are also praying for the dead, especially, but not exclusively, for our own soldiers; that they may rest in peace. Today’s gospel reading, from St John 14:1–6, urges us to trust in God, to not let our hearts be troubled, because there are many rooms in God our Father’s house.

Christian faith can be difficult to attain and retain at times. For some people of good will it remains a step too far. But Christian faith is based on beautiful truths and brings strength and consolation to believers, especially those who have stood at the mouth of hell.

So we pray for those who were killed; for those too who were wounded, for those who survived and were tortured for years, perhaps decades, by their memories. I remember hearing of a Victoria Cross winner who suffered every night from nightmares. We pray too for our soldiers’ families who often have to share these burdens. I urge and invite all present during this Mass to pray, especially for the war dead and for peace: peace at home, peace in the many trouble spots of today.

We Australians are used to Anzac Day, but to outsiders it seems unusual. Only this week, after the ceremony to commemorate the good work of the Holy See in identifying the war dead and ensuring a dignified burial place for them, a couple of European journalists marvelled to me at our involvement, coming from so far away.

While fewer Australians died in the Second World War, the war in the Pacific was a much greater threat to our continued existence. One or two people have tried to change the focus of the Anzac Day commemorations towards that conflict. Ex-Prime Minister Paul Keating still refuses to commemorate the First World War. But public opinion is rock solid, the focus unchanged. I have visited the start of the Kokada Trail in Papua New Guinea, but this attracts nothing like the number of pilgrims to Gallipoli.

I mentioned that the Gallipoli landings resulted in a resounding defeat. After months of stalemate and slaughter, the Allies had to retire, and achieved this in good order. But it was a defeat. The British, for example, do not strike medals for defeat. Despite all this, Anzac Day remains at the centre of our national mythology and our self-understanding.

This could only happen in a country where basic patterns of mind have been determined by Christian truths and virtues, even when these are unacknowledged. A fair go for all is one expression of the Christian teaching on universal love and of the Christian belief in the unique value of every human being, made in the image of God.

Anzac Day celebrations are inexplicable without the Easter categories of redemptive suffering, of the grain of wheat dying in the earth to produce good fruits. The Christian teaching that human suffering can be redemptive, that human suffering need not be without meaning and can produce unexpected benefits, is the key to the Australian interpretation of the Anzacs.

The sufferings of the First World War also brought another blessing into the Australian community. Until then the history of the colonies was marred by regular strife between the English and the Irish, between Protestants and Catholics. Unlike today where mixed marriages are the norm, Catholics and Protestants often did not mix together much. Most Protestants would never have met a Catholic priest, until the soldiers encountered the First World War Catholic chaplains, who made a distinguished and effective contribution across all religious boundaries. The bitter sectarian divisions continued after the First World War, but they were never of the same intensity. A common suffering had healed many old wounds.

We are gathered on the other side of the world for this centenary celebration, nearly as far away as possible from our homelands of New Zealand and Australia. Therefore we pray for our nations, for our fellow citizens. We pray that the best elements of the Anzac tradition will continue to sustain public convictions and sentiment. We pray in gratitude for the bravery of so many men and women. And we pray for peace. No major war is on or near the horizon, but murderous and barbaric violence has erupted in many countries and the persecution of Christians is almost unprecedented.

So we pray that our Father, the good God, will “give light to those in darkness, those who dwell in the shadow of death and guide us into the way of peace”.

Cardinal Pell, formerly the Archbishop of Sydney, is the Prefect of the Secretariat for the Economy at the Vatican. He delivered this homily during the Anzac Day Mass at the Domus Australia in Rome.

9 thoughts on “The Meaning of Anzac Day”

Rethinking the History and Value of Empires

Why Should We Study History?