A mannerist work of art is always a piece of bravura, a triumphant conjuring trick, a firework display with flying sparks and colours … Beauty too beautiful becomes unreal, strength too strong becomes acrobatics, too much content loses all meaning, form independent of content becomes an empty shell.                                  —Arnold Hauser, Mannerism (1965)

On a visit to the USA I pulled in to a beach house by Charles Gwathmey on Long Island. Gwathmey, at that time, was a rising architectural star on the East Coast. His house was a fashionable timber imitation of a Le Corbusier Paris artist studio. It was strikingly simple and sat behind the leading dune with a bridge extending seaward. Gwathmey was already there, and standing beside him in the newly installed kitchen was the doting client.

As I walked in, I noticed her body trembled visibly with excitement. She seemed on the point of orgasm. Short, slightly built and balding, Gwathmey was a most unlikely object of such sexual attention. Yet, the client’s visible excitement was unmistakable. This was my first intimation of a phenomenon that was so very American and unthinkable back in Australia—the architect as hero. It later occurred to me that American attitudes to architects were shaped by movies like The Fountainhead, which was based on Ayn Rand’s fictionalised account of Frank Lloyd Wright’s life that presented architects as defiant romantic heroes.

Today we are accustomed to celebrity culture. It is passé. However, the inclusion of an architect, even one as famous as Frank Gehry, the author of the Dr Chau Chak Wing Building for UTS in Sydney, in this circle of fame is something quite new. Narcissism is hardly recent, but it has reached unprecedented heights, and there is now no shame attached to falling in love with oneself. The culture of narcissism manifests itself in extremes and Gehry’s newly opened Wing Building in Sydney is the perfect illustration of an architecture that is so extreme in its indulgence of the arbitrary whilst, at the same time, brooking all criticism.

Gehry is a Californian architect based in Los Angeles who came to world attention with his striking Bilbao Guggenheim Art Museum in 1997 that helped revitalise that city. The client brief for Bilbao asked Gehry to make a design with a similar impact and transformative effect as the Opera House on Sydney. 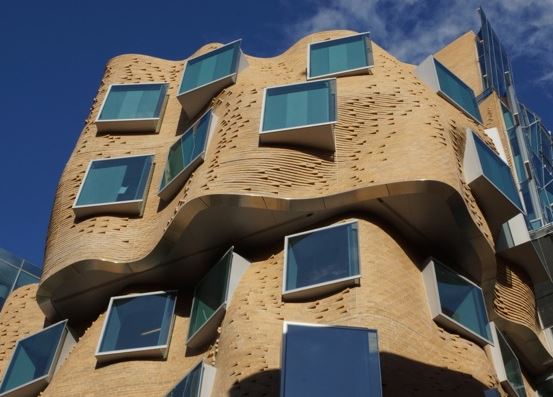 Until quite recently, architecture was a profession that attracted little media notice. This changed with the advent of the star architect. Gehry epitomises the extravagant culture that prevails in Los Angeles, inspired by the artificial values of the film industry there. Hollywood has reshaped the image of architects as idealistic non-conformists touched by the gold dust of artistic genius. Los Angeles is so much more than the home of the US movie industry, it is also the world capital of narcissism. Movie actors are surrounded by publicity and adoring fans, their antics are entertainment for the masses. To a degree Gehry’s architecture is shaped by the same values that pervade Hollywood. It is no surprise to find Gehry’s buildings immersed in the same narcissism and self-indulgent extravagant displays.

Frank Gehry is a recent exemplar of that Hollywood cliché. His architecture is loudly proclaimed as the world’s greatest. Gehry exemplifies the Hollywood mould of the rugged individualistic artist, thereby satisfying America’s need for its very own romanticised home-grown version of Michelangelo.

In certain respects the picture is almost accurate. Michelangelo was a sculptor turned fresco painter who turned to architecture and dedicated his final years to the design and completion of St Peter’s Basilica. Michelangelo was also a mannerist who turned the established classical formulae of the Renaissance on its head. Similarly, Gehry is an architect turned sculptor. His scribbles, his wayward twisted sculptures, are all part of his personal architectural signature, which in Italian was referred to as his maniera, manner or peculiar style. 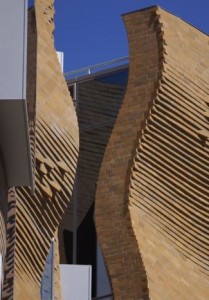 Gehry’s manner attacks the most fundamental founding principles of Modern architecture. It is anti-Modern. Gehry’s defiantly anti-Modern designs overturn such rules as structural integrity, truth to materials, rational simple cubic forms, and elimination of extraneous unnecessary decoration. At first glance they appear revolutionary. The most obvious change of agenda is his rejection of minimalism (the discovery—“Less is more”—that the elimination of everything extraneous has the unexpected effect of heightening the aesthetic) in favour of excess. Gehry throws restraint overboard. For Gehry, “The more the better!” He loves excess and celebrates the consumer injunction to buy more of everything as the road to happiness.

A glance at the new Wing Building is sufficient demonstration of where this takes architecture. Not only is the brick exterior a race-track of curves that crash together around the circuit; the building itself appears about to fall down. Gehry celebrates the superfluous and over-states the unnecessary.

Just like Narcissus who fell in love with his reflection in the water, Gehry performs a similar service with his extraordinary creation of a mirror staircase so that we may do the same. The stainless steel stair squeezes uncomfortably into the small foyer on the south Ultimo Road entry. The effect of being too big for its container is similar to Michelangelo’s 1526 Laurentian Library stair in Florence. Its fracture into countless small reflecting mirrors makes it impossible for anyone approaching it to take it in, such is the fragmentation of its visual shape. The impact of so many small mirrors is analogous to military camouflage; we are so overwhelmed by the strong visual patterns that the stair becomes invisible. All we can see is a mélange of incomplete reflections. The stair is a reminder of Mannerism’s narcissistic obsession with mirrors. The staircase is an extraordinary sculpture, perhaps the most dazzling thing of its kind in Australia and an instance of Mannerism par excellence in which the function is secondary. Standing at the top of the stair, we are no longer ordinary, we enter a new cinematic realm beside Scarlett O’Hara or Rhett Butler in Gone with the Wind. The stair is conceived as a film set, and we become unwitting actors. The object is one of self-observation and adoration, and every turn, every gesture we make is captured and sent back to us in a continuous parade of self-reflections. Its effect is more intense than any selfie.

The Wing Building is a variegated puzzle-work. We look in vain for the whole, but, instead, we are confronted by a collection of fragments. Fracturing of form is common throughout the building whether on the western glass facade, or reception desks that are reduced to a series of faceted surfaces that obscure the form itself. The result is a kind of fractured kaleidoscope of visual effects.

This reflects our present era of material excess with its accompanying breathless excitement. Gehry is driven by a compulsion to cram as many frantic curves as possible into the interior and exterior of the Wing Building.

The Wing Building is a clever demonstration of aesthetic excess. The crowded curves, the expression of brick as a loosely draped limp textile denies that material’s true character. Inside, the concrete structure is treated with a similar irrational disdain of logic, only one of its numerous columns being permitted to stand vertical. Several hundred tons of laminated radiata pine logs imported from New Zealand are stacked one on top of the other to make a primitive log cabin enclosure around an oval-shaped classroom. 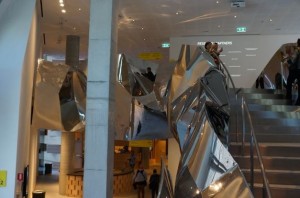 All the weird and wonderful shapes architects once dreamed of can be generated on computer 3D software. Computers aid but do not tell us how such impossible fantasies can be built. One wonders what the Sydney Opera House might have looked like if such software had been available to Jørn Utzon back in 1960. Would it resemble his original competition drawings, a low horizontal series of ten-centimetre-thick shells, in lieu of the heavy deep folded concrete vaults that stand upright at attention today?

Mannerism fixated on breaking rules, distortion, discord, compression, elongation, strangeness and contorted shapes. Gehry’s initial schemes for his UTS building suggest a building in mid-collapse. Most of us at some time have seen videos of structures being demolished. Gehry’s early models are just like that. His brickwork is distorted, windows twist out of shape, and the building skin is crumpled to indicate collapse. A certain amount of this was lost and is less apparent in the finished building, however on the east facade facing the city, a great vertical tear survives that looks more like a rip in a textile curtain than heavy brick.

The gesture is a further reminder of Gehry’s Mannerism. The Italian painter Giulio Romano designed a place for the Duke of Mantua in 1530 based on the very same notion of a destroyed world in ruin. His seeming classical facades are overrun by wild rustication symbolising nature on the rampage, triglyphs fall, and the main salon is decorated by a terrifying fresco of giants crushed beneath the falling stones of temples gripped by a powerful psychic earthquake. Romano’s imagery could just as easily have been painted in 2008 to depict American banks under attack that were supposedly too big to fail, necessitating their hasty rescue by the US government. The import of Gehry’s architecture could not be clearer. We live in a dangerous and uncertain age threatened by climate change and Islamic extremism, leaving us trapped in a state of permanent anxiety that is further amplified by the media. Nothing could be more natural or understandable under such conditions than the reappearance of Mannerism. 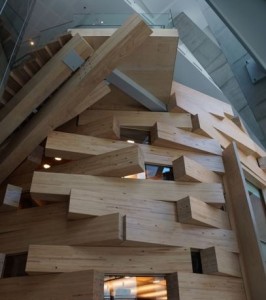 Narcissism comes at a price: negligible for a selfie, hugely damaging and ruinously expensive when a bank or financial institution is mismanaged and investors are defrauded of their savings, as happened with the GFC. Mannerism also has its victims: the unwitting UTS clients thought they were buying a certified $180 million masterpiece. Instead, what they got was a masterpiece of disillusionment mocking corporate corruption, instability and greed in high finance. Such imagery mirrors a society that has lost all sense of reality, a society moreover in which economics drives everything, and vision and truth are supplanted by mendacity of a kind the Tennessee Williams character Big Daddy hated so much. The Dr Chau Chak Wing Building mirrors society’s anxieties in the aftermath of the Global Financial Crisis, much as Romano’s infamous Palazzo del Te registered a similar shock in Italy after the sack of Rome in 1527 by Spanish and German mercenaries.

Mannerism is unlikely to last, with its exclusive focus on style as an end and its disconnect from reality—the world can only take so many twisted city towers before boredom sets in. The worst thing is that Mannerism sucks all meaning out of architecture and leaves it an empty shell, tantalisingly extravagant, seductive perhaps, but devoid of relevance. It is charged with aggression, anxiety and instability, qualities that ultimately leave us alienated. In sixteenth-century Italy, Mannerism was overtaken and replaced by the rhetoric of Baroque. Likewise, Gehry’s embrace of narcissism leaves his buildings vulnerable. Architecture, after all, is about more than sculpture on a grand scale. Buildings have purpose; they are used by people, very ordinary people for the most part. We may be entertained for a time by the flying sparks and colours, but only time will tell what is truly a master work.

Philip Drew is a Sydney architectural historian, critic, and author of over twenty titles including the classic, Leaves of Iron, a biography of the Opera House designer Joern Utzon, a cultural history of the veranda, and a study of the littoral construction of Australian culture, The Coast Dwellers.

The Betrayal of Barangaroo

The Continued Decline of the Suburban Church

The Death of Public Architecture