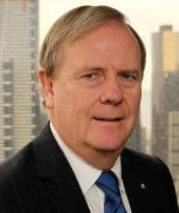 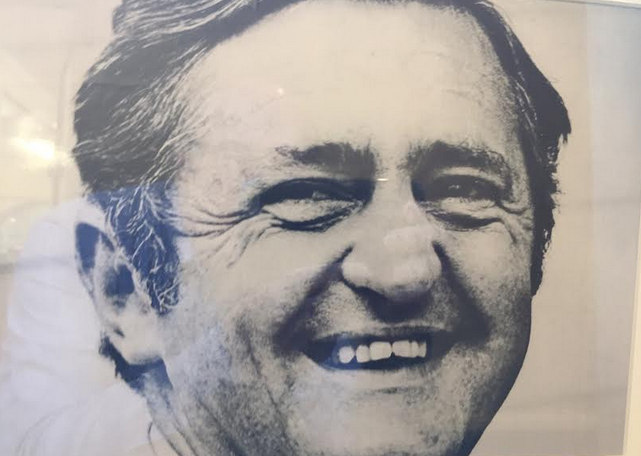 Peter Coleman in the Seventies, when he led the the NSW Liberal Party.

A former editor of Quadrant, Peter Coleman died peacefully with family at his bedside on Sunday night, his 90 years having spanned a remarkable life and career. Politician, editor, author, essayist, he was all that and far more beside. The words below belong to his son-in-law, Peter Costello, at the 2015 launch of an expanded edition of Memoirs of a Slow Learner

When I launched the first edition of Peter Coleman’s Memoirs of a Slow Learner, in 1994, I mostly dwelt on the journey of the author. He describes his early life as “growing up radical”. His father, who worked in advertising, was “an apostle of modernity”. It was not just any old kind of modernism either. Peter Coleman’s father, Stanley, once worked for a newspaper—the Age! After divorce, he settled in Sydney, where Peter joined him. The household was peppered with radical booklets and pamphlets. Peter went on to set a record in selling badges in the “Sheepskins for Russia” campaign.

At Sydney University—in the immediate post-war period—Peter Coleman was taken up with the prevailing leftist zeitgeist. He came under the influence of the ex- and anti-communist Professor John Anderson—which probably saved him from the excesses of student Marxism. By all accounts Anderson was a huge figure of influence on the university and the city at the time. At the launch of the first edition I described this memoir as a

journey through bohemianism and radicalism in post-war Sydney, through universities in Sydney, London and Canberra, and in and out of the lives of Australians of literary and artistic achievement like Robert Hughes, Bruce Beresford and Barry Humphries. In the background great intellectual wars were raging. There was the war against Stalinism and the struggle for the mind of post-war Europe—a story told by Peter in his book The Liberal Conspiracy—internationally led by Arthur Koestler, Irving Kristol and Raymond Aron. There was the war against the Australian disciples of Stalinism waged stout-heartedly by European émigrés such as Richard Krygier, Frank Knopfelmacher, Heinz Arndt and others. There was the literary war over the Ern Malley hoax and the academic war over Sydney Sparkes Orr.

It is worth reading this book just to get a feel for who was doing what back in those days of the Cold War. It is a description of a world that younger Australians will find hard to believe, how a ruthless dictatorial ideology held sway over many people who regarded themselves as the “intelligentsia”. It would take forty years for the ideology to collapse in failure. As we walk through the world of arts and letters and bohemianism in Australia in the 1940s and 1950s we get an intriguing snapshot of emerging Australian writers and artists.

Today I want to focus more on the aftermath of that journey, which the author leaves off at the start of the 1960s. He has an air of pessimism. The icons of his youth are beginning to topple. His academic hero, John Anderson, is playing to undergraduate populism, the church is losing to modernism and unable to explain its concerns in any coherent way. The principal defender of conservatism in Sydney is Warwick Fairfax in the Sydney Morning Herald. No wonder there was defeatism in the air if our best hope of defending traditional values was the Sydney Morning Herald!

This new edition of Memoirs of a Slow Learner includes an appendix written in 2006 titled “Leaves from the Diary of a Madman”, which takes up the story. Coleman finds a new purpose, embarking on a parliamentary career in both state and Commonwealth parliaments. He declares: “I am a Liberal Party liberal because I think the Liberal Party is the best expression of Australian liberalism …”

He is defeated at the state level and loses his seat. But that is followed by resurrection and eventual retirement at the Commonwealth level. It is not a bad record. Enoch Powell observed that “All political careers end in failure.” To get out before the voters finally lay you to rest is as good as one can hope for. Coleman comes to believe that politics is a virus that infects a person and renders them delirious. It cannot be cured, only managed. In times of remission, temporary sanity prevails and opens an opportunity to get out of the full-time parliamentary life on one’s own terms. 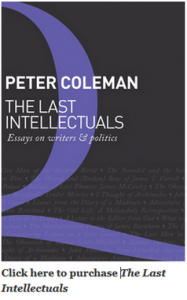 Although he leaves politics as a full-time paid career, the author is still infected by the political virus. Now at the age of eighty-six he writes much-read columns for Spectator Australia and Quadrant. He is a judge on the Prime Minister’s Literary Awards. Recently he entered the lion’s den of the ABC’s Q&A program.

He regards himself as a secular liberal. Of course there are great schisms within this group. On one hand there are the progressives, interventionists and liberationists. On the other there are sceptics, individualists and traditionalists. Coleman is in the latter camp.

But let me return to Peter Coleman’s 1960s. The church wanted to make a stand against moral relativism which it knew, instinctively, was hostile to the notion of revelation and moral absolutes. Academics were courting popularity and the Sydney Morning Herald was the bastion of conservatism.

Things are much worse today. The church no longer wants to engage against moral relativism, instead it largely echoes it. It does not think its relevance comes from opposing popular fads; it thinks it comes from being in the vanguard of them.

At the recent synod of the Melbourne Anglican Church, the delegates adjourned to be photographed under the banner that hangs from their cathedral that says, “Let’s Fully Welcome Refugees”. It does not have a banner declaring “Support for the Christians being crucified in Syria” or “Solidarity with the Churches being exterminated in Baghdad”. It would consider that divisive or offensive to the multicultural multi-faith view it takes of the world. In contrast, it would see taking on the government over refugees as a unifying cause. It means standing together with all those who read the Age and listen to the ABC, just like them.

After being photographed under the refugee banner the synod reconvened to decide how it could reduce its shareholding in fossil fuel companies. There was no discernible difference in the media coverage given to the Anglican synod compared to that of the Greens’ state convention.

These days, far from being the defenders of traditional or conservative values, the Age and the Sydney Morning Herald lead the fight against them. The church knows it will be attacked by the papers if it takes a traditional position, and widely praised if gets “progressive”. To use modern parlance, this as a no-brainer. If you think positive media coverage is a mark of relevance and success you should get with the program.

Back in the 1960s academics were courting celebrity from undergraduate audiences. But the universities didn’t have press offices and marketing managers as they do today. We now have universities taking huge billboard display advertising to publicise their marketing slogans. Universities take out radio advertising and hire super-boxes at sport stadiums to promote themselves and promote enrolment. They go to enormous effort to recruit overseas students because they can charge them higher fees and generate more revenue for their huge enterprises. They (correctly) describe this as earning export income. Celebrity academics are a wonderful way of promoting a university and its profile. This is a media-obsessed world, this world of Twitter and Facebook. Hits and traffic can be used to measure success more quantitatively than things like rigour and independence.

I hope there is still a place for conscientious academics who think their most important role is to open up inquiring minds, just as there are still faithful clergy who think it is their purpose to minister to souls without being distracted by the obvious failures of organised religion. There are people who still like to think a university should be a place of learning rather than an export industry. This goes to values. Values are deeper than politics.

Secular liberalism may well be an organising principle for public life, but can it speak to and explain our deepest values about learning and art, or our deepest questions about life and death? Peter Coleman knows that the credo of secular liberalism is not as robust as he once thought it was. He is, he says, still in conversation about it.

Peter Coleman’s fellow Quadrant editor and great mentor, the poet James McAuley, thought that the whole edifice of secular liberalism was unsustainable. He put his faith in God. Back in the 1960s Peter Coleman told us he was only one step ahead of the Hound of Heaven. It would be interesting to know if he is still on the run. One last chapter is still to be written about this!

The Hon. Peter Costello, Peter Coleman’s son-in-law, was Commonwealth Treasurer from 1996 to 2007. This is an edited version of the speech he delivered to launch the new edition of Memoirs of a Slow Learner in Melbourne last month.

A Letter to Tom Wolfe