Premature Obituaries for the US

With wars in Ukraine, Iraq, Gaza and Nigeria in the news every night for the past month, and having witnessed at a recent conference on the First World War a superb performance by Geoffrey Blainey, I looked up his 1973 book, The Causes of War.

Although it was written more than forty years ago, Google records the book is not only still in print but is also recommended reading in US military training academies. One dissertation by an American major at the School of Advanced Military Studies at Fort Leavenworth, Kansas, showed how closely Blainey’s thesis fitted the decisions taken by Saddam Hussein in the First Gulf War of 1990–91.

Blainey’s research covered every international war since 1700. It overturned much of the conventional wisdom on the subject, especially the notion that an international balance of power was the best way to prevent war. On the contrary, he argues, the historical record shows that an imbalance—or “a clear preponderance of power” within a distinct hierarchy—is more likely to keep the peace.

The critical factor is one nation’s perception of its power relative to others. The actual distribution of power is less important than how the nations’ leaders perceive it is distributed. “Wars usually begin,” Blainey argues, “when two nations disagree on their relative strength.” Moreover, wars usually come to an end when both sides learn from experience what each other’s true strengths are.

To determine its power relative to a rival, Blainey says, each nation weighs up seven factors: military strength and its deployment; the behaviour of other interested nations; the internal unity of the opponent; memories of previous war; strength of ideology; ability to pay for war; the character of each nation’s decision-makers.

This not only fits the historical record, but is also a plausible explanation for the dramatic upsurge in warfare of recent months by Russia, the Islamic State of Iraq and Syria, Hamas in Gaza and Boko Haram in Nigeria. In each case, however, the perceptions or power that have mattered most to the aggressors have not been those of their immediate opponents but of the United States.

These recent bouts of aggression all correspond to the perpetrators’ perception of America’s reluctance to act as protector of last resort in each of these areas. Indeed, they appear predicated on the belief that not only is the Obama administration reluctant to get involved because of the President’s character and ideological predilections, but that the United States is actually unable to do so because of its decline, both economically and militarily.

One of the principal reasons for this perception is that leading Western intellectuals, from both the left and right of the political spectrum, have kept talking about the decline of the United States ever since the Global Financial Crisis of 2008. At the time, the leftist philosopher at the London School of Economics John Gray declared: “The era of American global leadership is over.” Yale historian Paul Kennedy reprised his earlier best-seller, The Rise and Fall of the Great Powers, where he argued that America suffered “imperial overstretch” and predicted military spending and the consequent increase in federal debt would soon bankrupt the country.

The conservative Harvard economic historian Niall Ferguson was the most pessimistic of all. In 2010, in a lecture in Sydney for the Centre of Independent Studies titled “Empires on the Edge of Chaos: The Nasty Fiscal Arithmetic of Imperial Decline”, Ferguson said America’s fate would be sealed very quickly. Like other great powers of history, it would not decline gradually but would suddenly “fall over a cliff”. The tipping point would come when the costs of servicing government debt exceeded the defence budget, which, he said, would occur some time within the next five years, that is, by 2015.

Less dramatic pundits thought that while America would survive it would nonetheless lose its position as the world’s richest and most powerful nation to the unstoppable rise of China. Economists at Goldman Sachs predicted that by 2041, when the Chinese economy reached $26 trillion, it would catch up and pass the USA. The Nobel economics laureate Robert Fogel, of the University of Chicago, replied that this actually underestimated how fast the Chinese economy was growing. By 2040, Fogel said, it would be worth $123 trillion, putting China far ahead as world number one. 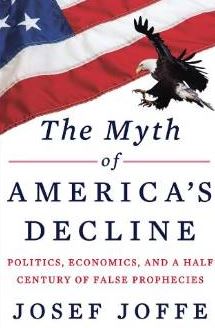 With the ominous year 2015 now rapidly approaching, I was pleased to observe that this debate has attracted a formidable contrarian, Josef Joffe, with a new book provocatively titled The Myth of America’s Decline. Joffe is the German-born, American-educated editor of the Berlin weekly newspaper Die Zeit and a fellow of several American conservative think-tanks.

The most powerful chapters of his case are less those devoted to the United States and more on the rise of China. Leftists like Fogel base their predictions on accelerating rates of double-digit Chinese growth. However, according to Joffe, both the laws of economics and the experience of recent history predict that a noticeable deceleration is due about now. He compares the rise of the Chinese economy to the earlier Asian “tiger economies” of East Asia—Japan, Taiwan and South Korea—which used the same growth model of “exports first”, driven by over-investment by the state and under-consumption by the populace. This formula generated prodigious growth from a very low base in its early phases but, as the three East Asian economies discovered, what worked wonders in the beginning flattened out once the takeoff stage was left behind. As they became richer, economic growth began to falter, thanks to a diminishing rate of return on capital. Ever greater amounts of credit and investment were needed to maintain the same level of economic growth. Similarly, by the early 2010s, China’s growth rates fell below double-digit level. Suddenly, Joffe writes, China looked like Japan, yesterday’s champion.

Joffe concedes there is still a lot of growth potential left in China, especially with half the population in rural regions still available to form a reserve army of cheap labour for the exports-first strategy. But, thanks to China’s one-child policy, in place for the past thirty-five years, there is a demographic debt soon to be paid. China’s working-age population will reach its peak at the end of this decade. Joffe quotes demographer Nicholas Eberstadt:

The spectre of a swelling population of elderly pensioners dependent for support on a diminishing population of low-income workers suggests some particularly unattractive trade-offs between welfare and growth.

The clincher in Joffe’s argument comes from an analysis of Chinese manufacturing by Michael Beckley. Instead of an emerging technology superpower, Beckley writes, China is a “piggyback economy”. More than 90 per cent of its exports are produced by foreign firms assembling imported components. Moreover, the foreign share of high-tech exports rose in the last decade, indicating that economic growth is not being matched by a commensurate increase in China’s high-tech expertise. China has never created an Apple, a Microsoft, a USB or a Google and is unlikely to do so in the foreseeable future.

In all probability, by mid-century China will be a major economy and a major power that might eclipse its old enemy Japan. But there is little chance of it becoming the great superpower its enthusiasts are predicting, let alone the world number one that dwarfs the USA. It is most unlikely that the rise of China will make this the “Asian Century”.

Meanwhile, the realities of military power in the present decade need to be considered. Joffe’s battery of statistics include the following: US military expenditure in 2012 amounted to $660 billion—38 per cent of all global military spending; China spends only one-third as much and most goes not on the projection of power abroad but on its land army at home. In naval power, the principal measure of military projection, American carriers and submarines traverse the Seven Seas. China has only one carrier, an ex-Soviet vessel still under construction, while the USA has ten nuclear-powered carriers, with three more on order. China has no military bases outside China, while America’s 115 (publicly acknowledged) bases circle the globe.

Hence, if the military adventurers of Ukraine, Iraq, Gaza and Nigeria are predicating their exploits on some perception of American decline, they are badly mistaken. The only thing they have got right is their view of the resolve of Barack Obama, who has been, so far, the most timid American president since Jimmy Carter. Someone should remind them, and the Western intellectuals whose wishful thinking they rely upon, that Jimmy Carter was succeeded by Ronald Reagan. The American democratic system was not designed for warfare, but weak presidents usually beget strong ones, and sooner rather than later.

Of Pieties and Perils

Bordering on the Hopeless