The cochlear implant, that wonderful little electronic device, has brought many thousands out of their silent world and is now recognised as life-changing technology for the deaf. But it was not always so.

That so many Australians have been given the gift of hearing is due to the surgical skill, perseverance and dedication of an extraordinary man: Professor William Gibson, simply known as Bill. To further a cause he profoundly believed in, he overcame sustained and sometimes vicious opposition from doctors, the health profession generally and, strange as it may seem, from the deaf themselves.

Surgically inserted in the ear, an implant does not “cure” deafness; it is a prosthetic substitute for hearing that does the work of the damaged hair cells of the inner ear, the cochlea, to send sound signals to the brain.

Before the French priest Michel de l’Epée devised sign language in the eighteenth century, demonstrating that deaf people were no less intelligent than their peers, they were written off as imbeciles. The nineteenth century saw the first hearing aids, based on Alexander Bell’s invention of the telephone. They were cumbersome and unsatisfactory and although there have been enormous improvements over the years, they cannot reproduce high frequencies and can only amplify residual hearing; the result was that the deaf continued to use sign language combined with lip reading. Those born deaf or who became severely deaf through injury or illness remained virtually forgotten, trapped in their isolated world with huge limitations on their working and social lives. This was the situation until the early 1980s when Bill Gibson became aware of the cochlear experiments. 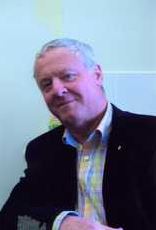 With a family background in medicine, Bill Gibson (left) says he “didn’t really consider any other job” and as a young graduate he soon became attracted to otology (ear surgery) “because of the exciting advances that were occurring”. Among these was Melbourne professor Graeme Clark’s research into cochlear implants, work that was derisively dismissed in England. Frustrated by the attitude of his English colleagues, and understanding the potential of Graeme’s work and with Graeme’s encouragement, Bill Gibson accepted an invitation to apply for the Professorship of Otolaryngology (ear, nose and throat; ENT) at Sydney University. With his wife and young family he arrived in Australia in 1983.

Despite Clark’s early cochlear implants having been successfully commercialised, the Melbourne ENT hierarchy regarded Clark as eccentric, if not crazy, and his work futile—they considered the idea of following speech without lip reading and sign “ridiculous”. Gibson had to tread carefully. But the University of Sydney was open to individual research, and encouraged by a small group of far-seeing supporters at Royal Prince Alfred Hospital, Gibson received the green light to go ahead: two patients received the first cochlear implants in 1984.

Gibson talks of “enchanting moments” seeing the wonder, amazement and joy on the face of patients when, with their new implant, the deaf realised they had moved into a hearing world.

He had accepted that questioning and understandable reservations follow any new medical advances, but he had not been prepared for the damning response when, as Sydney’s newly arrived professor, he was invited to speak at the ENT’s annual Toynbee Dinner. “My mention of the implant project,” he says, “brought an absolute avalanche of criticism.” The following year Gibson showed a film of the first demonstration worldwide of his cochlear patient carrying on a telephone conversation. The doyens of medicine greeted it with a frosty, embarrassed silence.

In the early days, money was always tight for a base for the cochlear team where they could assess patients’ suitability and hold follow-up visits. The first was a classroom used at lunch hour at the Chatswood Public School; a cupboard stored their equipment. Then, following a small government grant, a rented house was available at Narrabeen and then Chatswood; there the neighbours took it into their heads that Gibson was running a brothel and he had to front up and explain himself before the (fortunately sympathetic) Willoughby Council.

At the time of the brothel debacle, a disgruntled colleague was behind claims that Gibson had misappropriated funds from EAR (Ear And Related Research Foundation). Threatened with legal action, he had to endure four months of interrogation by a committee of inquiry to account for every dollar spent. He felt, he says, “fairly secure, as I had never even claimed a bus fare from the EAR foundation”. He was completely cleared and told he was “the squeakiest clean professor in the university”. But staring him in the face had been the probability of a return to England if an error had been found. It was a stressful and unhappy time. 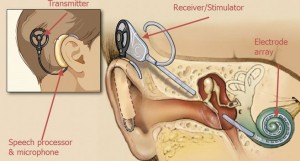 By 1986 the cochlear team had successfully carried out twenty implants for adults and Gibson says he was “desperately keen” to perform the surgery on children born deaf. He believed that if they received an implant before the age of eighteen months, speech would naturally follow hearing. For Gibson, early surgery became the new goal.

But many organisations of deaf people believed that it was wrong, even evil, to operate on the young “before they can decide for themselves”. Activists even referred to it as “cultural genocide”. Proudly aware of their own special identity as a minority using sign language, they saw implants as a challenge and affront to their culture from the hearing majority. The professional establishment—audiologists, paediatricians, teachers of the deaf and those with vested interests—were in equally strident opposition to Gibson’s plans. The Profound Deafness Study Group was formed, and Gibson soon became aware that their main aim was to dissuade him from proceeding.

Support from his own small team, the ecstatic reaction from patients, and his unwavering determination to pursue what he knew was right kept him going. Gibson’s quiet and unassuming manner belies the strength of will that drives him, and in 1987, he says, “in gross contradiction to the wishes of the Profound Deafness Study Group”, he performed the first implants on three young children who had been deafened by meningitis. One went on to an honours degree at Sydney University and is now a lawyer, but at the time Gibson received “a barrage of mail” condemning what he had done.

But continuing success brought its returns: long-overdue recognition and acceptance of his work had begun, and in 1996 the New South Wales Health Department allocated a wing of the old Gladesville Hospital as the permanent home of the Sydney Cochlear Implant Centre. “At the time,” Gibson says, “I never imagined how rapidly everything would progress over the next ten years. By 2002, a thousand patients had received cochlear implants.”

It was clear now that everyone—apart from a few stragglers—was listening, and Gibson’s new goal was to identify babies born deaf to give their parents the opportunity for them to have an implant. In the past, it was a shattering moment for parents to be told that their child had been born deaf, as there was absolutely nothing that could be done. With Gibson’s persuasion and encouragement, New South Wales initiated the most successful early-detection program in the world; it is now Australia-wide. Now, with a cochlear implant, children born congenitally deaf, but with no other disability, can go to a regular school and lead the life of a child with normal hearing.

Hearing speech is usually thought of as the main benefit of an implant, but hearing other sounds for the first time can be equally dramatic and liberating. A young motor cycle fanatic, aware only of his machine’s vibrations, was excited beyond belief when he was actually able to hear the roar of the engine.

With well over 3000 Australians, many of them children, having received implants, the Sydney Cochlear Implant Centre is expanding across the state to avoid making families travel to Sydney. With surgeons and staff, seven centres are fully operating from Parramatta to the ACT and a centre in Darwin is well under way.

Bill Gibson is, of course, delighted with the continuing success, but, never one to rest on his laurels, he is now channelling his efforts towards overseeing research into the cause and a cure for Menière’s Disease. This condition (“disease” is a misnomer) of the ear results in sudden and sometimes extreme attacks of giddiness, often accompanied by violent nausea, and has defied medical knowledge since the condition was first identified in France in 1861 by Prosper Menière. Sydney now has the first laboratory in the world dedicated solely to research into Menière’s Disease.

Despite worldwide accolades for his work on cochlear implants, Bill Gibson retains the compassion and humility of a man with the common touch. Every month you’ll find him organising a sausage sizzle outside Woolworths in Balmain on behalf of his Rotary Club because, he says, “I enjoy rolling up my sleeves and giving my free time to help worthwhile causes.” It’s just another dimension of what he’s been doing all his life.

Julia Patrick contributed “The Radical Ambitions of Green Sustainability” to the September issue.

Religion and the Rise of Modern Science

How Labor will Generate an Impoverished Energy Future