Some issues in Australian public life are so important they won’t go away. One is the Petrov Commission and the charge that a “nest of traitors” operated in the Department of External Affairs under Dr Evatt and his departmental head, Dr John Burton. Mark Aarons’s book The Family File produced some startling new evidence on the topic a few years ago; Senator Lee Rhiannon’s and her family’s adherence to communism are at present under scrutiny; in July the Melbourne journalist John Kiely staged a play, Conspiracy, on activities connected with Lionel Murphy; and now Nicholas Hasluck has published a novel, Dismissal, which is a mainly fictional version of the murky world of alleged espionage and intelligence services’ investigations from 1945 to 1975. 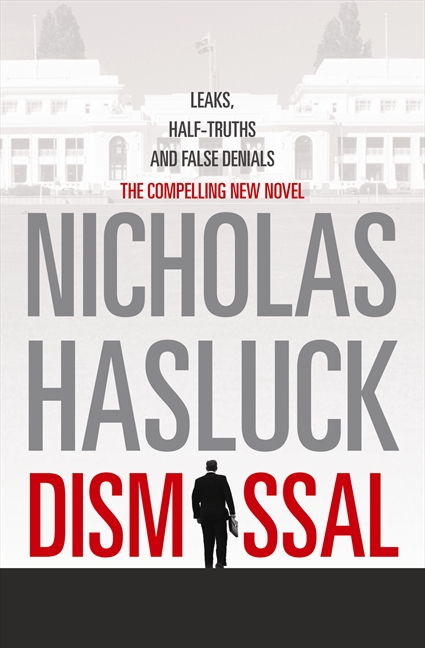 Dismissal is a political novel whose structure echoes that of Solzhenitsyn’s The First Circle and Tom Wolfe’s The Bonfire of the Vanities: in all three an initially small incident snowballs, threatening to gradually engulf the main character. But whereas in the first two the hero is an innocent, here the protagonist is consumed by guilt over his past associations.

Characters in Dismissal exist on three planes of reality. Some are actual people—Garfield Barwick, John Kerr, Gough Whitlam, Lionel Murphy, Bert Evatt, the Communist Walter Clayton, the fellow traveller Jessie Street, and the convicted USA spy Alger Hiss. The action of the novel takes pace against the background of actual political events, so these people are frequently referred to, but do not themselves appear, except briefly in a few instances.

The novel has some features of a roman à clef, so a second order of reality involves apparently fictional characters who may have likenesses to real people. Thus the character Colin Meyrick, who tries to purloin secret foreign policy documents and absconds to Budapest in the early 1950s when he realises the game is up, is most likely based on the Soviet spy Ian Milner, the Australian Kim Philby. A New South Wales Labor parliamentarian in the novel, Cobra Corman, a key backroom party strategist, has more than a passing resemblance to Graham Richardson. As this novel is in the genre of the spy/detective/political thriller, part of its interest for the reader is in trying to divine any possible real-life basis for the characters.

But the main characters are fictional and provide a third plane of reality (or virtual reality) in the novel. The central figure, Roy Temple, is a successful Sydney barrister and Whitlam government adviser, flamboyant, popular, self-confident. Freya Gayle, a public servant, and Simon Dacey, an anthropologist specialising in the Pacific region, are friends and former colleagues of Temple who go back a long way, as far back as the San Francisco conference which established the United Nations. This meeting was attended by Dr Evatt, the leader of the Australian delegation; Alger Hiss was the conference secretary-general. The three main fictional characters had fashionable left-leaning views in the 1930s, believing the capitalist system was evil and about to collapse. ASIO suspects that at the San Francisco conference one or more of the three main characters were closely associated with Hiss, and tried to obtain documents to pass on to the Meyrick/Milner figure. This means the novel is a fictionalised version of the serious postwar security leaks which were first aired at the Petrov Royal Commission. The reader has to adroitly adjust to constant shifts between the three orders of reality.

In parallel with local political events, the novel covers a sequence of episodes related to our external security: from the San Francisco conference, the atomic tests at Bikini atoll and Monte Bello, and the Petrov and Hope royal commissions, through the West Irian crisis in the early 1960s and the proposed Melanesian Federation (devised by John Kerr and James McAuley to thwart Soekarno’s expansionist adventurism), to the Indonesian takeover of East Timor in 1975. In the novel these external events, which have the potential for subversion, become entangled with our mainstream political life when Whitlam sacks the head of ASIS over its activities in East Timor as the supply crisis gathers momentum. Mark Aarons’s book revealed that ASIO told Whitlam that (leaving aside Murphy and Cairns) two ministers in his government had strong communist affiliations.

Nicholas Hasluck has been a successful novelist and chair of the Literature Board of the Australia Council. His experience as a barrister and Supreme Court judge means he can handle with ease the many cross-examinations which are part of the intelligence investigations recreated in the novel. The scenes at Yarralumla and Admiralty House have obviously benefited from Nicholas Hasluck’s acquaintance with those residences from the time when his father, Sir Paul Hasluck, was Governor-General. Paul Hasluck was a contemporary and political acquaintance of many of the figures in this book, and most likely passed on his shrewd observations on them to his son. Nicholas Hasluck edited and published his father’s very sharp diary memoirs as the book The Chance of Politics.

Hasluck senior was an official in the Department of External Affairs from 1941 to 1947, working closely with Dr Evatt, whom he distrusted, and was part of the Australian delegation at the San Francisco conference. The West Australian historian Geoffrey Bolton has written of this time:

While in the department, Hasluck had formed friendships with first John Burton and then Ian Milner, only for a rift to arise in each case. He came to see Burton as too much Evatt’s pet, and when at the age of thirty Burton was appointed secretary to the department, leapfrogging seniors such as Hasluck and Alan Watt, it was the trigger for his resignation. Further to the left than Burton, Milner defected to the Soviet bloc. Disenchantment with these friendships may well have fostered disenchantment with the left wing in Hasluck, though he never entirely lost his small “l” liberalism.

We look on the espionage events outlined in the Petrov Commission and the immense literature on the Philby group from the outside. But this novel is a unique study from the inside of what it is like to be a suspect over the decades, interrogated by ASIO, never sure of your ground, never sure how much the authorities know, how much the release of the Venona intercepts implicates you, whether you are named in the famous Petrov document J, whether your colleagues were just idealistic left-wingers or sinister communist agents. This is a Kafka scenario—the suspect puts himself through the wringer in his own mind, going through all the possibilities and suffering as much from this self-torture as he does from ASIO questioning. Roy Temple appears to the public as on top of things, about to be appointed a judge in a high jurisdiction, but his self-confidence is crippled by brooding about his past enthusiasms, and worry that exposure at this late stage will ruin his promotion, as well as the Whitlam’s government’s already shaky credibility.

Sentences tossed off in discussion of these matters echo in his and the reader’s mind: “A man with a touch of treason in his nature”; “The world you come from pulls you back”; “The young idealist never knows where his good intentions will end up”; “But once implicated there’s no way back”. As a reader one is equally bewildered in making up one’s mind about what precisely has transpired in the past, and how fact and rumour become inextricably entwined. It’s not merely a matter of betraying your country. As events in the past are gradually revealed, the three former comrades-in-arms fall out with each other, since they fear one of them has betrayed the others to the security services. Someone always seems to be dobbing them in to the security services. As in all good thrillers, the culprit, who comes out of left field, is not revealed until the last pages.

The Obsession of David Scott Mitchell

Look Back with Apprehension

Haddon Chambers and the Long Arm of Neglect