Frank Devine performed his last editorial duty from the hospital bed of his cancer ward. He read and corrected the page proofs of a book of his best essays from Quadrant. Former editor Paddy McGuinness recruited Frank to be a regular columnist in 2002. By the time of his death on July 3, 2009, Frank had written a total of sixty-seven columns for the magazine. In mid-2008 I asked him to make a selection so we could publish them as a book. He did better than that. He went on to write another eight pieces for both magazine and book. Most of the latter focused on the question that appeared intermittently in his earlier columns but which he now brought to the fore: growing old. He wanted to describe what it felt like to become old but also to write about how to handle it well. 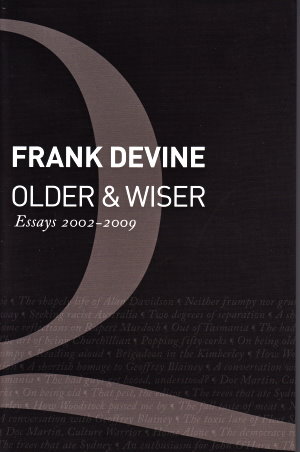 He had decided on this topic in 2001 when, aged seventy, he retired from full-time journalism. Growing old was an aspect of the human experience only thinly covered in literature, he observed, and was especially neglected in the memoir form—“the insider’s view”. It took him a long while to break his career-long fixation on the events and debates of the present, and for his first five years as a Quadrant columnist, he touched on his chosen topic only lightly. In the January-February edition of 2006, however, he got down to business, writing what would become the seminal work of his project, the essay “On Being Old”. From then on, and with no good model except some short newspaper pieces by the English historian A.J.P. Taylor, collected in 1984 as An Old Man’s Diary, Frank focused on his project.

He wrote about his cancer treatment, about being home alone when his wife Jacqueline was hospitalised, about the proper attitude and attire for a man his age. In his mid-seventies, he said you lose one of the dimensions of time and tend to focus only on the past and the present. So he wrote about the formative influences on his life and his career in journalism in New Zealand, Perth, Chicago, New York, London, Tokyo and Sydney, where he and his family finally settled down. He also wrote about good writers and great men. His selection of his best work included two pieces each on Winston Churchill, Geoffrey Blainey, P.G. Wodehouse and Rupert Murdoch, even though one focused on Murdoch’s lack of judgment for sacking him as editor of the Australian—“one of the enduring mysteries of Australian journal­ism,” Frank wrote, “although the number of memories in which it endures is not large.”

Frank lived long enough to produce a body of work that deserves a distinguished place in Australian literature. While several of his friends always knew how good a writer he was, his ability still deserves much wider recognition. His entire career was in journalism, as reporter, columnist and editor, occupations that rarely seek, and even less rarely achieve, recognition as literature. A tribute from Christopher Pearson did his writing justice:

“There was always a delicacy and playfulness to his prose. He understood cadence and how to make a sentence sing. He was that rarity among conservative columnists in Australia, someone who could write in a powerfully persuasive way without leaving readers feeling hectored or bulldozed into a position.”

Pearson noted Frank’s debt to Evelyn Waugh, from whom he learned a lot about minimalism, deadpan humour and storytelling devices borrowed from the cinema, the fast-forward and the flashback. But there was another influence that should not be overlooked. A life of reporting and sub-editing left Frank instilled with the stylistic techniques of newspaper journalism: active voice, writing as you speak, finding the right noun or verb rather than piling on adjectives and adverbs, culling every unnecessary word, telling the story without drawing attention to the prose. Not many people recognise that, if done well, this is a formula for great style, but Frank did. His essays for Quadrant turned journalism into an art form.

Frank’s columns attracted many readers to the magazine and often drew generous comments, but the monthly publication cycle meant they had a limited shelf life. However, when you read the best of them one after another in book form, you can’t help but recognise how impressive an achievement they are. Above all, the book lets us see how he developed character.

In 2008 I asked Frank to write two columns for the magazine on the television series Doc Martin and The Hollowmen. He accepted the first offer because he liked the character of Martin Ellingham, an urban man of science confronting bucolic traditions in a Cornish village, but he knocked back the Australian political satire The Hollowmen because he thought its central figures were stereotypes without character. One of the things he especially liked about its British forerunner, Yes, Minister, was the way its characters remained true to themselves but also grew in depth throughout the series and, as a result, grew on their audience.

As Frank continued his Quadrant columns, his literary self went through the same process. He leaked more and more details about his friends and family, the people and values he admired, all within the context of a narrative about the look and feel of getting older. By the time you get to his final piece, a celebration of his fifty years of marriage to Jacqueline and the institution of marriage itself, you know his character very well. He had turned himself from a good prose stylist into a great essayist.

When I gave Frank the page proofs of his book in early May, he was very ill. He asked me whether I thought there were any signs of his deterioration in the later writings. I said, “No, if anything, they get better as you go along.” He grinned and said, “I thought so too.” The story of his life.

Older and Wiser, Essays by Frank Devine 2002–2009, will be published by Quadrant Books this month.

Helen Trinca, editor of the Australian’s weekend magazine, made the most encouraging response to learning I was being treated for prostate cancer.

“That can be your new persona!” she exclaimed.

As a professional performer I knew exactly what she meant. From now on, whenever I wrote and published something it would have cachet as possibly my last words. Not that this would necessarily guarantee reverence. For example, when a journalist friend recently announced his retirement, our former prime minister Paul Keating asked him: “Why don’t you get that old fart Devine to retire too?” This implication that I still had the ability to get under the skin of somebody who claims to be able to read and listen to music at the same time added appeal to my new persona.

The other most encouraging comment on my circumstances came from a loved one after observing me exercising my personal magnetism with some attractive nurses during a stay in hospital: “Ah, the Maurice Chevalier of the prostate ward.” Even if you’re past it, there’s no reason not to “Thank heaven for little girls / They grow up in the most amusing way.” It was this particular loved one, incidentally, who packed all my pills and potions into a used (naturally) Dom Perignon box.

This may all seem frivolous or smack of whistling in the dark, but it is neither. Procedures for treating prostate cancer are well-established and have a good rate of success. The booklet I was given says the average time my form of treatment holds the cancer at bay is two and a half years, which isn’t nothing, and that “some men continue symptom-free lifestyles for many years”. At present I am symptom-free and consider myself a suitable candidate to become one of the some.

In any case, when you reach a certain age, say from seventy-five on, it’s hard to share Scarlett O’Hara’s conviction that “tomorrow is another day”. Maybe it’s not. You become accustomed to not fretting about it. The reassurance by several doctors who have given me their attention that I am more likely to die “with” my cancer than “from” it is therefore only a modest and possibly short-term comfort.

P.J O’Rourke, the noted American essayist and author, recently delivered a fine Irish deathbed oration in his syndicated column. He has been diagnosed with a form of cancer that has, like mine, often been treated successfully, but he is twenty-six years younger than I and therefore inspired to a higher level of eloquence.

Describing himself as “a practical Republican”, he argues first for the usefulness of death. Without it, evolution would not be able to sustain momentum. This pragmatic way of looking at death had not occurred to me but O’Rourke, whose fame is to some extent built on his flights of fancy logic, asserts that “if death weren’t around to finalise the Darwinian process, we’d all still be amoebas”.

However, O’Rourke also believes in God, as I do, and in prayer being too sacred to be used for whingeing. He concludes: “The next time I glimpse death … well, I’m not going to go over and introduce myself. But I’ll remind myself to try, at least, to thank God for death.” Being one of the superstitious Irish, I’m not inclined to jog God’s arm with such detailed forward planning. Maybe I’ll take the circuitous route and thank him for practical Republican Catholics.

—extract from “Trying On a New Persona” by Frank Devine, in the December 2008 issue

In Memory of Neil McInnes