Look, a conservative.
Get him! 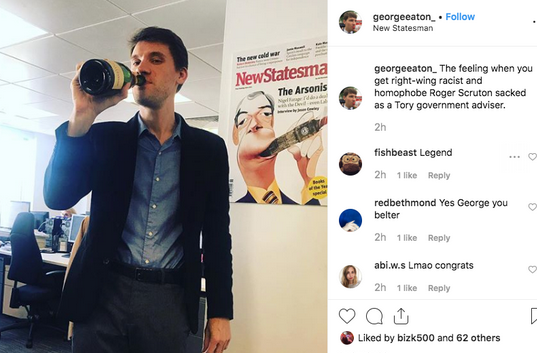 In Quadrant‘s April edition, reviewer Oliver Friendship addresses Sir Roger Scruton’s recent collection of short stories, Souls in the Twilight, observing that the conservative thinker’s fictions are all the more valuable for being at odds with the politically correct strictures that hobble the imaginations and output of so many writers less keen on telling stories than courting favour with the modern literary scene’s doctrinaire arbiters.

Well it seems literary luvvies are not the only ones with whom Scruton is at odds. As Quadrant contributor Anthony Daniels reports under his pen name Theodore Dalrymple, a nasty little hatchet job by the deputy editor of The New Statesman has prompted Sir Roger’s ejection from the chairmanship of Britain’s Building Beautiful Architecture Commission. Dalrymple writes:

… It was obvious from the first that his appointment was a wound to the predominant faction of the British intelligentsia that could be healed only by his dismissal. The sheer hideousness of most of what has been built in Britain over the last few decades (so immediately apparent that only an intellectual could miss it) was no excuse for having allowed Scruton to sully the corridors of power even for a few months. In the great work of ridding the body politic of the stone in its shoe or the thorn in its flesh, any slur would do, any libel or slander that came to mind was perfectly acceptable.

An interview with the deputy editor of the New Statesman, a left-wing weekly, sealed Scruton’s fate, as it was intended to do. The deputy editor, George Eaton, almost certainly counted on the utter pusillanimity of the British government—and he had himself pictured swigging champagne directly from the bottle immediately after the government dismissed Scruton. In the published version of the interview, Eaton gives an impression of Scruton as an anti-Semite, hater of Muslims, and despiser of Chinese. All these accusations are false and defamatory, as any reader of Scruton would know…

That’s Eaton pictured above, chucking down the champers to celebrate, as he tweeted scalp-in-hand before deleting both the snapshot and this comment

The feeling when you get right-wing racist and homophobe Roger Scruton sacked as a Tory government adviser.

In the interest of fairness, it should be noted that Eaton denies being anything but a principled and upstanding chronicler of straight-bat truth. Why, he’s shocked — yes, shocked! — that anyone might suspect him of spreading thick the slime and slurs to bring down a man whose conservative philosophy he disdains. Eaton’s defence of the hatchet’s place in architectural criticism can be read in full here.

UPDATE: ‘We’ve lost, I’m afraid’ — below, Paul Weston on the lynching of a giant, Roger Scruton, by the ‘pygmy Left’ and, far more distressing,  his abandonment by those who should have been his champions.

2 thoughts on “Look, a conservative.
Get him!”

The ‘matter’ of conservatives

And the big girls fly…