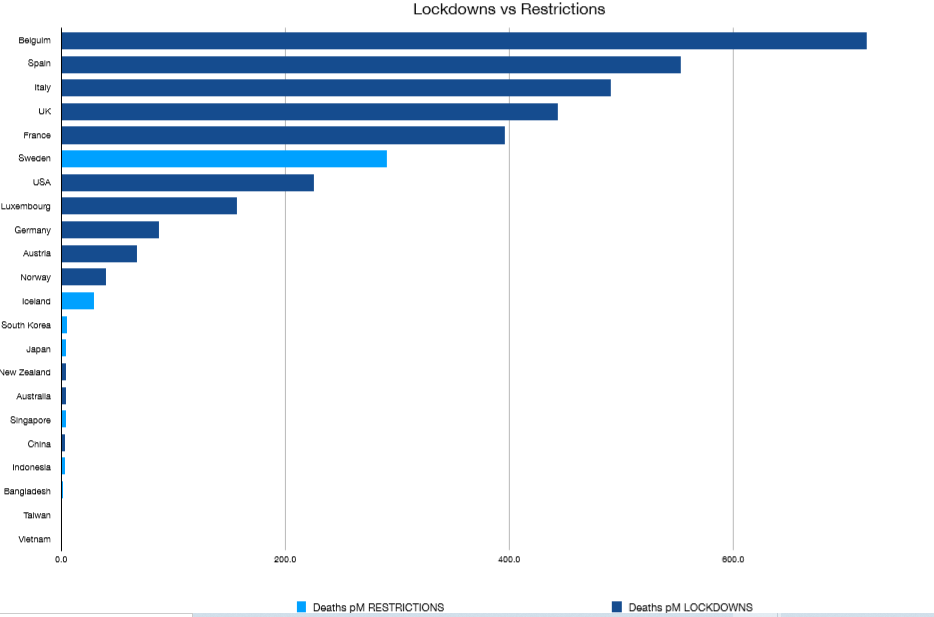 Friend of Quadrant Colin Robertson writes to share his chart detailing the WuFlu’s toll around the world:

I’ve been tracking the performance of various countries with regards to testing, mortality and restrictions. It’s become more and more apparent — to me, anyway — that the lockdown success of the antipodean counties is a post hoc fallacy. Sadly, I live in Victoria under the yoke of Red Dan Andrews, who seems to believe utterly that lockdowns save lives. Maybe they do, maybe they don’t.

What I’ve noticed is that the mainstream media quote raw data mostly, the death totals per country. As I see it, it’s meaningless to compare New Zealand (population 5 million) with the US  (330 million) but this is exactly what they do, I’ve noticed that intelligent journalists and commentators convert the data to death/population per million.

The graph above (which can be examined in enlarged detail here) takes this a step further and shows the success/failure of various northern and southern countries with and without lockdowns.

You’ll often hear lockdown fans quote Sweden as a cautionary tale, but the Swedes have done considerably better than Belguim, Spain and the UK, all of which have been locked down tight.

The reactions in Australia and NZ are almost laughable — locked down, hiding under our beds and yet doing significantly worse than Singapore, Japan, South Korea and even Bangladesh. These are all countries that have taken simple, sensible precautions but not trashed their econonies. Meanwhile, we shoot ourselves in the foot!

The next time a politician tells you the lockdowns have saved us, smile quietly to yourself and think of the graph atop this post.