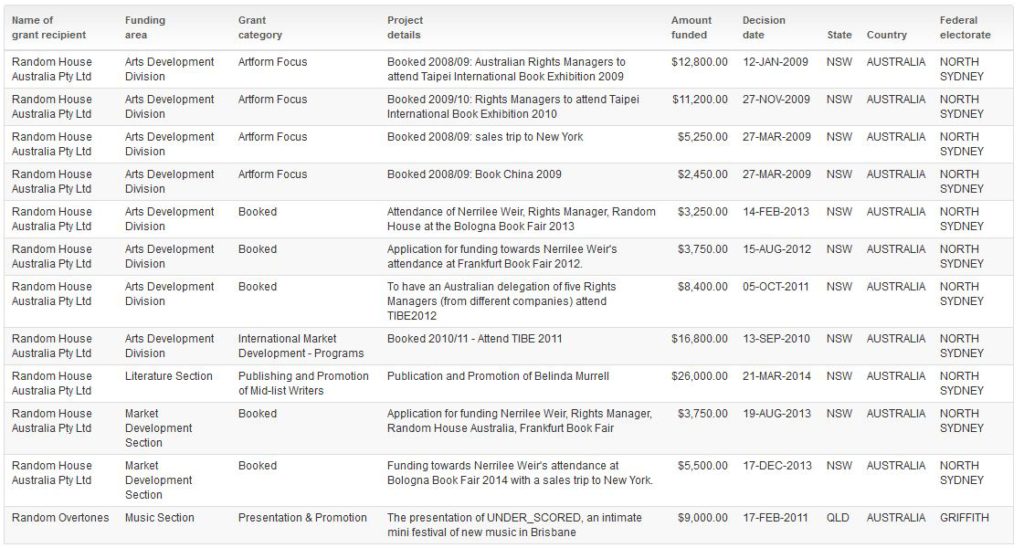 In the Saturday editions of the Fairfax Press, three prominent Australian keyboard-ticklers — Peter Carey, Richard Flanagan and Thomas Keneally — capitalise on the happy disgrace that neither the Sydney Morning Herald nor Age has an editor. Certainly, there are office doors emblazoned with that title in each newsroom and, if pressed into service, a thermal camera might register the presence of body-temperature tissue in the form of two large lumps. But actual, real-life editors, the sort who read with a critical eye what their reporters and columnists hope to lay the next day  before the public? Don’t be silly!

The proof is in the literary trio’s open letter to Malcolm Turnbull, in which they make the following assertion:

The Australian book industry is not a government subsidised or protected industry. To say otherwise is an ideological fiction.

This will come as news to the Australia Council, whose website offers a handy tool for discovering which scribblers, daubers, wailers, leapers, emoters, versifiers and, yes, publishers have received how much and for what. It can be a lot of fun poking around in the arts treasury to learn where the money goes, the results being full of surprises. Who would have imagined, for instance, that Bolt Case litigant Anita Heiss might be worth $90,000 of taxpayer support, that sum helping her to produce romantic novels about Aboriginal women who travel the world, shop at Tiffany’s and agonise at length about Mr Right and the state of their hearts?

More than that, Ms Heiss has also shared a $30,000 grant to compile an anthology of Indigenous writing (click the image immediately below). Her partner is this endeavour is none other than Peter Minter, the recently departed Overland poetry editor who once proclaimed he would never publish any poet whose work also had appeared in Quadrant. When queried about this policy of exclusion and intolerance, as Minter and Heiss might describe it, the Australia Council confirmed Overland‘s right to use any measure it fancies in determining how and with whom it divides the proceeds of those grants it draws on the taxpayers’ account. If the poetry editor does not like your politics, or what he perceives to be your politics, that bizarre and subjective yardstick is every bit as acceptable to the Australia Council as literary merit. Your taxes at work, men and women of Australia!

But back to publishers — or, just as an example, specifically to Random House, which prints and distributes Ms Heiss’ melanin-tinted rom-com frivolities. As her literary works are subsidised by the taxpayer, the local arm of the giant US publisher has no need to pay an author’s advance. Surely this amounts to a subsidy — and, it might be argued, a grotesquely unfair one, as publishers less adept at submitting grant applications will need to cover such costs themselves. Moreover, those lesser houses’ writers are financially disadvantaged. While Ms Heiss can expect to receive royalties on the first copy of her book to find a buyer, un-subsidised publishers’ authors will need to sell quite a few in order to get out of the red.

But it doesn’t stop there. Once Ms Heiss — or any of its grant-fed writers for that matter — has turned in her manuscript, Random House can then qualify for grants to promote and advertise the finished product. The illustration atop this post is a screen grab of the subsidies Random House has received over recent years to underwrite what less favoured publishers must fund from their own pockets.

Nor is Random House alone. Below is a screen grab of the subsidies directed to Penguin, which is actually part of Random House.

If Quadrant readers find themselves with an idle moment, the link below leads to the Australia Council’s grants page. Enter a few names for the fun of it and have a look around. It does not require much effort, at least from those inspired by curiosity and a yen to learn what editors of old quaintly revered as their quest for truth. Those crusty sorts have vanished, replaced by, well, whatever word best describes editors who do not edit and newpapers which think fact and fancy are one and the same. If you have reduced your masthead to, still and for the moment, a daily joke, why bother to check your contributors’, er, facts?

‘Look what you’ve
made us do to you’