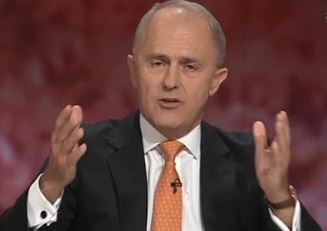 Malcolm Turnbull plays the PM-in-waiting and explains mercy to the Indonesian President via Q&A:

Yes, they have committed very terrible crimes and, yes, they knew that the death penalty was there if they were caught and found guilty. But it is not weak to spare their lives. It is a sign of the strongest love, the greatest mercy, when you extend it to those who least deserve it. That is a sign of strength. President Jokowi can be so strong, so strong that he does not have to take the lives of two men but to give them life to continue to rehabilitate, to repent for the rest of their days.

A man commits a crime, he should know better. We have him killed, we feel pretty good about it. Or we kill him ourselves and we feel even better. That’s not power,though, that’s justice. That’s different than power. Power is when we have every justification to kill — and we don’t. That’s power.

That’s what the emperors had. A man stole something, he’s brought in before the emperor, he throws himself down on the floor, he begs for mercy, he knows he’s going to die… and the emperor pardons him. This worthless man. He lets him go. That’s power. That’s power.

The Member for Wentworth does his emoting at the 7.00 minute mark of the Q&A video at the link below.