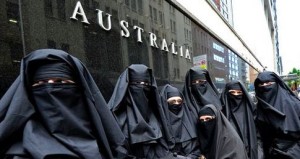 Pakistani journalist Khalid Hasan has probably never heard of Senator Cory Bernardi, but both men are of one mind about veils, burqas, hijabs and the other items in Islam’s haberdashery of oppression:

“The rumpus being created in the West by exhibitionist and deluded Muslim women, whose conduct flies in the face of clear Quranic injunctions and who confuse tribal customs with divine commandments is creating even more difficulties for ordinary, God-fearing Muslims than they already were struggling against.

The utterly uncalled for insistence on donning the hijab and, of late, wearing the niqab, an attire more suited to the profession of banditry than anything I can think of, belittles Islam in whose good name it is being done. No sensible person can disagree with British politician Jack Straw who ended up putting his head into a hive of very angry bees when he said that he found it hard to communicate with a person whose face he could not see.”

The sweet stench
of ‘success’