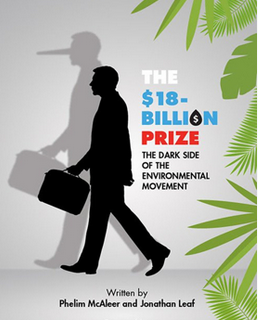 Does this sound familiar:  an artistic sort — a playwright in this case — breaks with luvvie groupthink, produces a work deemed ideologically unsound and finds himself shunned and banished? From the US, Jonathan Leaf writes:

Recently I awoke to find that I was being censored in an American city I did not live in and slandered by people I had never met. I was about to learn a great many ugly truths about self-professed “free speech advocates” and a somewhat dubious group within the environmental movement. There are, I believe, important lessons here.

The cause for the attacks on me was a play I had co-written with conservative filmmaker Phelim McAleer entitled The $18 Billion Prize. It had just opened in San Francisco to astonishing audience response. It had also been singled out by the San Francisco Chronicle as a theatrical event of special note. And one of its subjects, Chevron, is the city’s biggest corporation.

Yet, strangely, no reviews were coming out.

A contact out of the blue from a Berkeley undergrad named Daniel Kennard began to explain the mystery. A secret campaign had been organized to prevent reviews or further comment on the play, and a rave review had been spiked by an aging Berkeley leftist who prided himself on his involvement in the school’s Free Speech campaigns of the mid-1960s. The group behind the attacks on the play falsely claimed that I and Phelim had been funded and supported by Chevron. They had used this slander to persuade editors that the play should be marked off as corporate PR and ignored.

Leaf’s account, which can be can be read in full here, will come as no surprise to Quadrant readers, who enjoyed Tony Thomas’ online account of the same green lawfare in March. Nor will subscribers be unaware that the Australia Council cut us off without warning or a red cent while lavishing $324,832  — yes, that’s not a typo — on the forever left-and-ludicrous Overland. To see what the culture cartel think deserves taxpayer dollars and lots of them, follow this link or visit Tim Blair for more on an Overland writer’s tantrum after her play about feminism and netball was denied the full measure of public funding to which she feels entitled.

For further reading on the luvvie left’s closed-door policy to all thoughts and works other than their own approved mode of thinking, such as it is, see Shelley Gare’s essay from our 2010 archive, “Death by Silence in the Writers’ Combat Zone“.