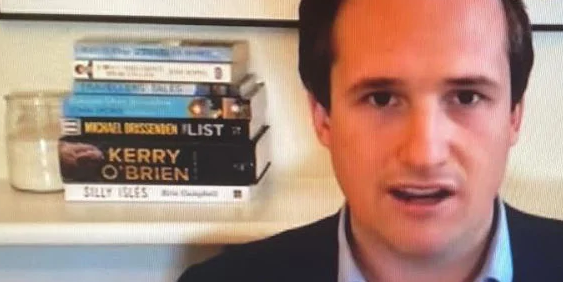 The New York Times in May pulled together a group profile of the foreign correspondents who cover Washington for the rest of the world, among them the ABC’s James Glenday (above), who by his own account can barely cope with the workload:

I think we’ve kind of hit peak in terms of what we can realistically do.

All masters of their trades, be they cabinetmakers or cabbies, learn from experience how to make the difficult somewhat easier, and such skills journeyman Glenday also appears to have mastered — that of the template and the contemptuous dismissal, both of which are evident in his most recent report for the ABC’s news website.

First, there is the entirely subjective definition of what is and isn’t the news Australians need to know, bearing in mind how quite a few people are intrigued by the emerging details of the Obama crew’s spying on the incoming Trump administration. But not Glenday, whose second paragraph informs the curious what they can do with their questions:

It’s not worth discussing at length.

There, that’s how you do it! The workload that would have been required to lay out the web of chicanery, apparent entrapment, abuse of FISA applications and much more is swept from the workbench by the simple expedient of declaring it not to be work at all. It’s certainly not a new technique, having stood production-line workers at East Germany’s old Trabant automobile factory in good stead for decades. Fasten those bolts? Make sure the wheels are attached? Nah, just treat them as unimportant and send that vehicle out the door.

Then there is what might be called “the template hack”, which astutely avoids plagiarism while slavishly aping the content and sequence of points made by another writer who earlier addressed the same topic. Below, Glenday explains why “Obamagate” is all about the perfidious Donald Trump’s efforts to direct attention from his failure, in the estimation of the ABC and Democrats, to protect Americans from the Chinese virus. Two days before the ABC’s story appeared, the hard-left Vox website featured a piece along exactly similar lines. Below, compare and contrast how the two stories begin:

GLENDAY: In the past week, a rebadged conspiracy theory has been breathlessly promoted by the US President and conservative media pundits: OBAMAGATE!

VOX: We’ve been introduced to a new conspiracy theory this week: “Obamagate.”

GLENDAY: It’s not worth discussing at length.

VOX: There’s no point in unpacking this theory here

GLENDAY: But in summary, the story is essentially an updated version of a long-running fringe theory that the Obama administration and the nefarious “deep state” illegally sabotaged Donald Trump from the very start, partly by entrapping his former national security adviser Michael Flynn in the Russia scandal.

VOX: But for the sake of a reference point, here’s the simplest version possible: “Deep state” holdovers from the Obama administration allegedly spearheaded the prosecution of former National Security Adviser Michael Flynn as part of a broader scheme to undermine the Trump presidency.

GLENDAY: There is no evidence to tether the vague narrative to reality. Even Trump, when asked for more details, has struggled to specify what criminal activity took place:

VOX: I really don’t want to offer any more details because, again, this is a bullshit story. (Trump, despite promoting it endlessly, couldn’t even explain it when asked by a reporter.)

GLENDAY: “It’s been going on for a very long time,” the President recently mused. “You know what the crime is. The crime is obvious to everybody.”

Let’s be clear; this entire theory is a diversion, a predictable move from the Trump political playbook.

GLENDAY: While “Obamagate” is being covered and debunked by media outlets, less time is spent reporting on the 90,000-odd Americans killed by the coronavirus, the Administration’s slow pandemic response or the human cost of the worst economic crisis America has seen since the Great Depression of the 1930s.

Steve Bannon, the President’s former strategist, is often credited with best distilling this strategy. “The Democrats don’t matter,” he reportedly said in 2018. “The real opposition is the media. And the best way to deal with them is to flood the zone with shit.”

VOX: This is the latest example of zone-flooding, a phenomenon I described at length back in February. The strategy was best articulated (in America, at least) by Steve Bannon, the former head of Breitbart News and chief strategist for Donald Trump, who in 2018 reportedly said: “The Democrats don’t matter. The real opposition is the media. And the way to deal with them is to flood the zone with shit.”

GLENDAY: In an ideal world, media outlets would simply filter out the metaphorical faecal matter, reporting what’s right and ignoring what’s wrong. But in reality, the US industry in the digital age is more partisan than ever and certain sections are often diametrically opposed. Key figures, like the President, can also simply turn to social media to spread their messages. For journalists, following the range of competing narratives for a living can be tiring.

Yes, untangling “competing narratives for a living can be tiring”. Fortunately there are ways to save an ABC foreign correspondent from toil.