‘Just without the jokes’ 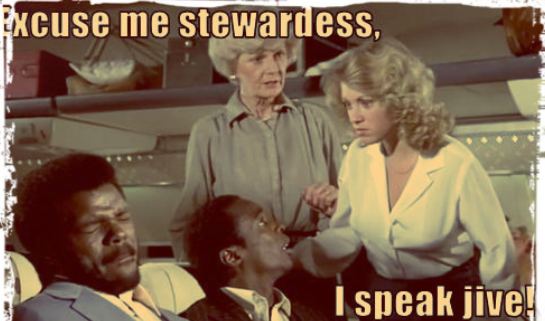 One byline most would never expect to see in the august pages of Commentary is that of David Zucker, who produced the gag-stacked Airplane, a flick that has amused millions and, as he modestly notes, continues to appear on most critics’ ‘best comedy’ lists. As he laments, he wouldn’t be allowed to make the film in today’s Age of Woke. Below, a sample of an essay that really deserves to be read in full:

Last year marked the 40th anniversary of the release of Airplane!, the comedy I wrote and directed with my brother Jerry and our friend Jim Abrahams. Just before the world shut down, Paramount held a screening at the Egyptian Theater in Hollywood, followed by a Q&A in which an audience member asked a question we never used to receive: “Could you make Airplane! today?” My response: “Of course, we could. Just without the jokes.”

Although people tell me that they love Airplane! and it seems to be included on just about every Top Five movie-comedy list, there was talk at Paramount of withholding the re-release over feared backlash for scenes that today would be deemed “insensitive.”

I’m referring to scenes like the one in which two black characters speak entirely in a jive dialect so unintelligible that it has to be subtitled. I’ve lost count of the number of people who have said to me, “You couldn’t do that scene today.” But I always wonder, why not? Half the gags in that joke were aimed at white people, given that the translation for “Shit” is “Golly!”—and the whole gag is topped off by the whitest lady on the planet, the actress who played the mom in Leave It to Beaver, translating.

The bit was evenhanded because we made fun of both points of view. No one ended up being offended by that scene, and all audiences loved it. They still do. But in today’s market, if I pitched a studio executive a comedy in which a white lady has to translate the speech of black people; in which an eight-year-old girl says, “I like my coffee black, like my men”; or an airline pilot makes sexual suggestions to a little boy (“Billy, have you ever been in a Turkish prison?”), I’d be told, in Studioese, “That’s just fantastically great! We’ll call you.”