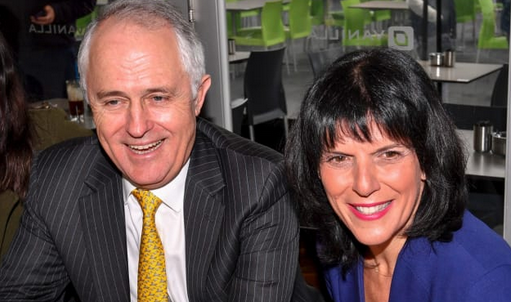 Ms Banks with the latest incarnation of Sir Robert Menzies

It wouldn’t be stretching a point to say that a good few conservatives, perhaps miffed that Peter Dutton prompted the leadership spill and then failed to nab the top job, are watching PM Scott Morrison’s first days with something of a wary eye. That is entirely understandable. After Malcolm Turnbull’s betrayals, the suspicion that one is to be gulled yet again is only natural, especially to the eyes of those who have noticed that some of the ousted usurper’s slimiest parliamentary acolytes appear to have done rather well from the transition. Those fearful that the ADF’s fighting persons will be asked to paint not one fingernail but all ten in a lovely shade of martial red will take no comfort from the identity and history of the latest Defence Minister.

That said, some of the signs are very encouraging indeed — Angus Taylor, climate sceptic and scourge of renewables rent-seekers, appointed as Energy Minister being perhaps the most cheerful so far. And today, only slightly less uplifting, came the news that Turbull fan girl Julia Banks, who represents the Victorian seat of Chisholm, won’t be doing so after the next election. If the polls are calling it right, that marginal seat is lost anyway, so her departure could be viewed as proof that every dark cloud has a silver lining. One less whine-a-matic offence taker to rabbit on about sexism and racism and our planet’s urgent need to see pensioners cold in winter lest the global thermosat go berserk. One less Turnbullian, in other words, who joined the wrong party and made it what it is today.

And such a whiner! This, for example, from Ms Banks’ maiden speech:

I did not know what a boy at primary school meant when he said to me, ‘Wog, go back to your home country.’ … I was hurt more by the tone of the word and less by its definition. I felt ugly, scared and very alone.’

All these decades later and she is still on about a schoolyard slight. Indeed, it shaped her attitude toward free speech, which she appears to believe is a good thing but only so long as congenial sentiments are uttered:

…whilst this was just a primary school playground experience, it sowed the seeds for my belief that public figures, and those who have a big share of voice in the media and other forums, have a higher duty of care and responsibility to think before they write and speak. This is not ‘political correctness gone mad’; rather, that those who have this voice should apply the test of respect and responsibility, and ask themselves: how would that Australian child who is watching or reading this feel? I suspect the same way I felt that day at primary school.

So, the perception of offence is to be calibrated according to the yardstick of Ms Banks inner, wounded, deeply scarred little Greek girl.

Victimhood fits so well, Ms Banks then slips into a new outfit: target of masculinist oppression!

I am the young woman who has experienced sexist comments throughout her working life … I am the junior company lawyer who calmly walked past unionist wolf whistles on a picket line … they called me a wog—that word again—as well as other obscenities that went to my gender.

From this nasty experience, the ever-victimised Ms Banks draws what many will regard as the wrong conclusion: not that union louts need to be arrested and punished severely (not that such a thing happens in Victoria, given our politicised police force), but that it is the oafs’ sexist language which is the real problem.

Even motherhood is a mixed blessing:

I am the young mother who spent until 4 am with a very sick baby son with croup in a steaming bathroom just wanting the coughing and the crying to stop, whilst knowing I would be torn away in a few hours to go to an important work meeting. I am the mother who cried all the way driving to work, or to the airport, with the sounds of my child crying in my ears.

But thoughts of her career and how important it is make leaving a sick child much easier to bear:

My tears stopped as I knew in my heart that ultimately I was a better mother as a working mother, and travel was a mandatory part of my role and my career.

And finally, in that maiden speech there was this (emphasis added):

I have worked … [for] white, grey-haired men, and many of them great leaders. One of our greatest prime ministers, Sir Robert Menzies, was a great, white-haired man and a great leader, as indeed is our current Prime Minister, Malcolm Turnbull.

Yes, Sir Robert Menzies and Malcolm Turnbull are cut from the same cloth. Really! Is it any wonder the Liberals are in such a parlous state?

Ms Banks’ resignation statement, which can be read here or via the link below, ends her short parliamentary career on the same note it began — more victimhood, more whining, more poor-me laments and every sentence infused with the overpowering stench of identity politics.

Ms Banks will linger until the election. Should she need help to clean out her office, one suspects there will be no shortage of volunteers.

Just perfect for the ABC