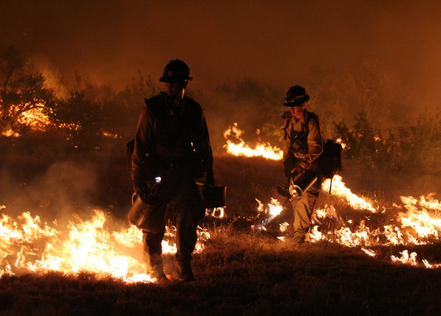 In the SMH, catastrophist and member of the Climate Council Greg Mullins grants himself permission to score some carbonphobic points by linking the NSW bushfires to climate change, a theme Deputy Prime Minister Michael McCormack today dismissed as “the raving of inner city lunatics“. Bodies are being hauled from the ashes, a gross of homes and more has been destroyed and firefighters continue to push themselves beyond fatigue. But it you’re a Flannerian there is a never an inappropriate moment to be driving the warmist wagon.

It is beyond sad that the SMH would publish such opportunistic twaddle, and not merely for what was evidently a decision to forgo a thorough fact-checking before Mr Mullins’ screed went to press. Worse than that, it is a reminder of how far the former Fairfax papers have fallen — the yardstick being an article, “Eternal Flame“, published back in 2002. Here is a sample:

… The menace of the bushfires was compounded by the fact that, in urban areas and in rural retreats, people welcomed the seductively tranquil outlook of high gums and cool shade. Conservationists approved the preservation of the arboreal landscapes. They also looked askance at burning-off of forests during hazard-reduction operations.

Political pressures were brought to limit hazard reduction programs. There were legal restrictions against ordinary householders clearing fire hazards; they could not go cutting down trees in land they did not own and often there were preservation orders preventing them from cutting down trees on their own land.

The result was that householders were often surrounded by fuel. Valleys leading to clifftops where houses were built became gigantic flues with fireballs sweeping up, to destroy homes in minutes. In 1990, Dr Ross Bradstock, a scientist with the NSW National Parks and Wildlife Service, said one of the paradoxes of urban Australia was that people wanted to live in the bush but “they get upset when fires burn their blasted house down. People seem to think they have a right to live in the bush but escape the onus of fire.” …

As NSW burns, an examination of those factors — the obstacles to staging prophylactic burns, the green romanticism that sees homes built amid pyres awaiting only a spark, the stripping of residents’ right to make their homes safe — would seem worth reprising.

But not at the SMH, not these days, not with a newsroom overloaded with children and supervised, the word is used loosely, by editors who are card-carrying members of the carbon cult.

No wonder they
want him silenced