Jihadis on the jungle gym 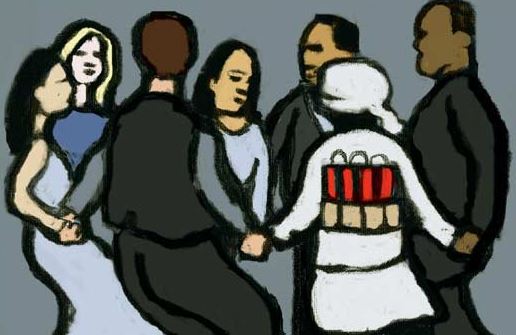 In The Age, surprisingly, a report about a peril other than global warming, discrimination against cyclists and the implacable evil of Tony Abbott:

A growing number of Victorian schools are grappling with the radicalisation of students and parents, the Australian Principals Federation has warned….

…. One principal who spoke to Fairfax Media but did not want to be named, said some parents at their school were extremists. At least two parents were fighting for IS in Syria.

“We have to work extra hard to ensure students don’t take up their parents extreme beliefs,” he said. I have them singing the national anthem with the Australian flag and say what a lucky country they live in.”

That un-named principal should watch his step, as one of his superiors, a current deputy secretary of the state’s Education Department, is a certain Sonia Sharp, who came to Victoria from Rotherham in England. It was there that a local principal’s efforts to bring Muslim students into the mainstream via non-denominational morning assemblies saw her accused of racism by Muslim parents opposed to their kids singing God Save the Queen, especially in the company of kuffar tackers.

Under Ms Sharp’s bureaucratic gaze, the threats and harassment became so extreme the principal was unable to set foot on the grounds of her own school and, after 12 months of vitriol, was forced to resign.

Here is how Ms Sharp explained the principal’s departure to the Daily Express. Notice the even-handedness of a committed multi-culturalist educator:

“It was not that she [the principal] felt the separate meetings were a bad thing — but she wanted more community spirit and felt that the work going on in the gatherings could be brought into a wider arena. There was a difference of opinion and in the process, relationships broke down.”

Rotherham, some might recall, has also witnessed the systematic rape and sexual abuse of some 1400 teenage girls by Muslim “grooming” gangs.

Someone missed the memo