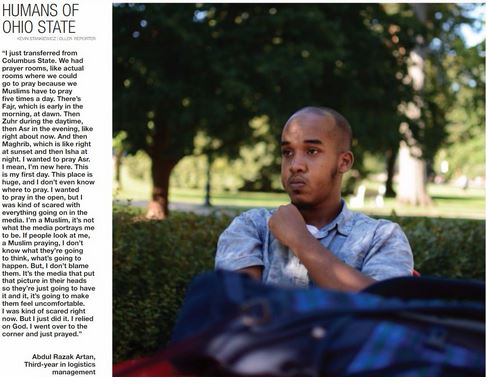 No doubt, sooner or later, the Fairfax rags and ABC will get around to reporting some background details on the young man who ploughed his car into a group of people on the Ohio State University campus, then hopped out and began stabbing those he had not managed to squash.

Well, just for the record, his name is Abdul Artan, he was a Somali refugee and, by his own admission, a proud Muslim who prayed five times a day and had been confronted by the Islamophobia that so characterises the intolerant, racist West. Atop this post is a recent profile of Artan from the campus newspaper, The Lantern.  Here is what he had to say about himself  and the shortage of Muslim prayer rooms at his former university (emphasis added):

“I wanted to pray in the open, but I was kind of scared with everything going on in the media. I’m a Muslim, it’s not what the media portrays me to be,” he told The Lantern. “If people look at me, a Muslim praying, I don’t know what they’re going to think, what’s going to happen. But, I don’t blame them. It’s the media that put that picture in their heads so they’re just going to have it and it’s going to make them feel uncomfortable. I was kind of scared right now. But I just did it. I relied on God. I went over to the corner and just prayed.”

Eventually the Age an SMH will get around to mentioning the attacker’s name and religious affiliation. Eventually, maybe. If those appalling newspapers haven’t been shuttered in the meantime for want of readers, advertisers and credibility.

Follow the link below for IBT‘s ongoing, updated coverage.

UPDATE: Some eight hours after the Ohio attack, the Fairfax press has now flushed news of the event down the memory hole. The report on Abdul Artan’s rampage and death, initially and prominently placed on the Age homepage, has now vanished entirely.