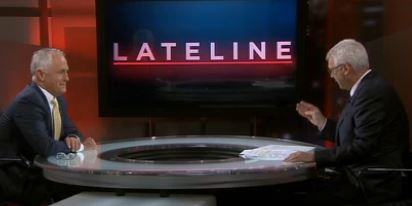 Everything is relative, as modern academics like to tell us, and Thursday night’s performance on Lateline by our PM is the proof of that. According the SMH, it was “a clash”, which it wasn’t, not really, but who these days expects accuracy from the Fairfax press? Rather, judged against the gentleness Turnbull always received from host Tony Jones on Q&A, his treatment, mild as it was, must have been a rude awakening.

When Tony Abbott was yet in The Lodge, the national broadcaster found it useful to promote his eventual replacement as the urbane, cultured, progressive, leather-jacketed alternative, the sort of “conservative” an ABC staffer might imagine taking home to meet his lesbian mums. Last night, though, there was a sharper tone to the encounter, and let us also say that Turnbull should have anticipated the wind change. That he did not see it coming can be taken as an object lesson in the folly of believing one’s own publicity, not to mention the bitter harvest due the man who, when he might have done something, made it a point to overlook the biases that direct the way the ABC goes about its business. An election is in the offing and Turnbull remains, when all is said and done, a Liberal, so no more ultra-gentle massaging for him. There are Greens to be elected, Laborites too. In Ultimo and Southbank, that makes Turnbull an obstacle rather than a means to a temporary end.

It was actually possible to feel some sympathy for the man, albeit not much, as his trusting innocence eroded beneath the studio lights. There were curly questions about Islamist killers hiding among the tide of migrants now rolling over Europe. There was the embarrassment of having to explain how he came to deploy that empty, ludicrous Veep slogan “change and continuity”. There was that nasty, messy Sinodinos business to be shrugged off, plus other prickly matters, all of which the PM sought to bury beneath heaped helpings of silver-tongued waffle. But a clash it wasn’t — certainly nothing in comparison with, say, the muggings that were then-Treasurer Joe Hockey’s standard treatment at the hands of Jones, his ABC colleagues and various stacked audiences.

Still, the indignity of being pressed for answers, even mildly pressed, must have stung because, when Jones advised his subject that there was but one more question, the formerly favoured Liberal seemed more than a little peeved at this unaccustomed handling.

This appraisal was undoubtedly wrong. There will be a lot more spears and darts as the election draws near and those he took for allies and admirers greet him not with smiles but daggers.

It should be quite the show, relatively speaking.

The full Lateline interview can be viewed by the link below.