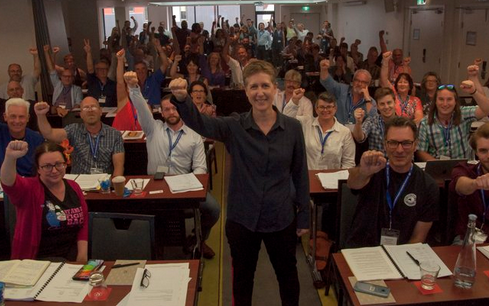 You might have missed this, but it seems there is so much outstanding journalism in Australia that one set of Walkley Awards per year is just not enough. Thus do we learn that the Media Entertainment & Arts Alliance’s offshoot, the Walkley Foundation, has instituted a second tranche of garlands for those whose lauding simply cannot wait until near the end of the year.

The announcement solicits entries for categories such as “Women’s Leadership in the Media” and “Freelancer of the Year”, which saw ex-Age reporter Jo Chandler bag 2017’s gong for once again ringing the death knell of the Great Barrier Reef.  If Ms Chandler feels like penning a follow-up she might get a nice yarn out of reporting James Cook University’s vendetta against Professor Peter Ridd. She already has the contacts, as many of those whose scholarship, research and findings Ridd has decried as no better than grant-oriented sensationalism are prominent amongst Ms Chandler quoted and trusted authorities.

So, potential entrants, now that you know the MEAA is keen to endorse the climate establishment, what other topics might pleasure the judges to a state of rampant enthusiasm?

Well, any reference, no matter how tangential, to the boundless evil of Donald Trump and those who voted for him would seem a good bet if John Shand’s 2017 triumph is any guide. You can read his piece here, Meaning It: Truth, Trump Universality and Cultural Amnesia. Cynics might well conclude yet another prize category needs be implemented: an award for discerning what on earth Mr Shand is on about.

And there is guidance, too, from the other Arts category winner, the Guardian‘s Kate Hennessy, who wrote an appreciation of the Belvoir Theatre’s “re-imagined” version of The Drover’s Wife. If you haven’t recently read Henry Lawson’s famous tale of an outback woman considering her life as she waits to kill a snake beneath the floorboards, know that Aborigines figure only in passing. But not in the Belvoir version, which makes common cause between the victimhood of women and the murderous oppression of Indigenes, in the process inspiring Ms Hennessy to this flight of award-winning prose:

The black man is Yadaka and he is not dead. Like the drover’s wife, he is an underdog and a survivor: taken as a kid to join a circus, fleeing the horrors of a clan killed by poisoned waterholes and trying to return to his mother’s country across land now criss-crossed with fences.

Yadaka and the drover’s wife share stories, at first falteringly, then freely. Before him, her uterine waters splash to the floor; later, useless breast milk darkens her dress. Her body teems with life and death, as women’s bodies do, and Yadaka seems not disgusted but in awe. “In my tribe you would be treated like a queen,” he says.

Yadaka’s role under the Big Top is not detailed, but the influence of a clown is most certainly to be observed in Ms Hennessy’s opus.

In this morning’s Australian, on page 18, there is a report that Kerry Stokes’s Seven West Media is looking to cut some sort of a merger deal with Fairfax Media, whose two most recent suitors eventually examined the books and walked very quickly away. Do you think, just maybe, Fairfax  and the ailing, money-losing, trust-funded Guardian might not have flushed themselves quite so far around the S-bend had they concentrated on news and the pursuit of truth, rather than dishing the codswallop evidently valued by judges who know what the public needs to read, rather than what it is entitled to read? It used to be called “news sense”. These days it is neither.

Vale Australia journalism, consigned to a grave decorated with wreaths of gorgeous awards. What a pity so few former readers could be bothered attending the funeral.

All who fancy their chances of taking home a mid-year Walkley should follow this link or the one below. But be warned, if you are not a paid-up union member it will cost you $150 per entry. It is almost as if the MEAA doesn’t want any winners who can’t brandish a Che fist on demand.

A multi-culti kind of lovin’

Premature obituaries for the US