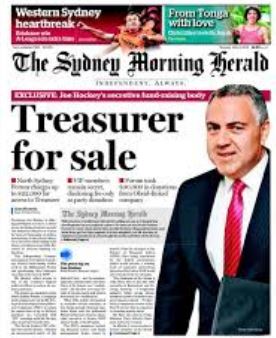 Just what sin a Fairfax writer must commit in order to be disciplined is a great mystery. Last week, for example, SMH columnist Paul Sheehan was suspended for having taken as true the improbable word of a woman who insisted she had not only been gang-raped by Arabic-speaking men but was shunned by the police to whom she attempted to report the incident. The story, dubious at a glance, was subsequently revealed to have been the fantasy of a fabulist, a woman who then declined to have any further contact with the columnist she landed in quite the spot of bother.

Make no mistake, Sheehan messed up very badly indeed, and while it could be argued that he was left vulnerable by a corporate policy that, in the name of balancing the books, has seen experienced and diligent sub-editors paid off and sent away, thereby removing the chief and traditional barrier to falsehoods making it into print, the ultimate responsibility sits squarely on the author’s shoulders.

But what of other sinners? How can it be that, say, SMH editor Darren Goodsir was not slapped around by his corporate masters for what a court found to be nothing less than malice in publishing a poster headline asserting former Treasurer Joe Hockey was “for sale”? Goodsir’s rhododendrons have suffered for want of the attention they might have received had he been rewarded with what, at a minimum, would have struck many laid-off subs as a clear and compelling need for gardening leave. Yet Goodsir sails serenely on, free to lament “unacceptable breaches of fundamental journalistic practice” in others.

Perhaps, if Sheehan had reported his informant’s assailant was a large and conservative man from North Sydney he might still have a desk to sit at.

Sheehan’s confessional column, in which he admits having been played for a sucker, can be read via the link below, complete with editor-inserted “updates”.