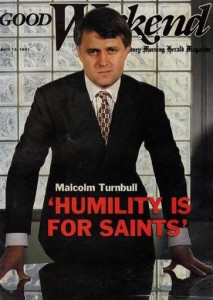 These marvelous times in which we live, what wonders they have brought! A man can be a woman by the simple act of declaring himself as such. An overwhelming preponderance of Old World genes is no bar to undiluted Indigenous authenticity. And, according to our moral instructors in the media, when an Islamic fanatic guns down a random innocent on a Parramatta street while shouting “Alahu Akbar!” the explanation is not self-evident but, like so many similar recent incidents, another great mystery of our age.

The key to stretching the leash that in less enlightened times heeled us more closely to fact is that peculiarly modern capacity to “identify” one thing as something which it is not. Advocate that green is really brown or a duck an ostrich and, if your audience can be persuaded not to note the obvious, all manner of re-classification is possible. Take Sun-Herald columnist Charles Waterstreet, for example, whose inspiration when tossing off today’s column appears to have been a decision to identify as fellow Fairfax columnist Elizabeth Farrelly. Understand that to mean he is channeling a compulsion to say little that is coherent at great and flyblown length.

Several efforts ago, Ms Farrelly endorsed the need for a new religion, a melange of green-tinted feminism that more than one reader must have been left suspecting would revere in its chief temple an effigy bearing a striking resemblance to someone, well, very much like the column’s author. Today, her male doppelganger nominates another prospective deity to preside over a rival cult: Saint Malcolm of Wentworth.

At last we have a leader who can bring Muslims into the fold of our Western World, gushes Waterstreet, and it won’t even require any of those difficult, interfaith discussions about women as second-class creatures, let alone the ongoing validity of Koranic admonitions to strike at the necks of infidels and other problematic neighbours.

Here’s a little of the Gospel According to Charles:

Turnbull has begun to solve this unexpected internal civil disturbance by reaching out to all of Australia, including all Muslims … he must reject the bullhorn radio cheerleaders of hate and division, the racist call to arms by dogmatic dividers, and become more Mandela, more Martin Luther King, more Mother Teresa, and more Malcolm the mediator and moderator, rather than Monty of North Africa.

The “Monty of North Africa”. Good Lord! Other than defeat Rommel, what did the World War Two general do to deserve being dragged into Waterstreet’s wacky ramble? Yet the column does have some value. As an example of the love people who don’t vote Liberal are showering, for the moment, on the party’s new leader, Waterstreet’s column cannot be beat.

What many Liberals think of the new PM is, by contrast, much easier to decipher than a Fairfax columnist’s attempt at clear writing. Click the link below and it will sound a lot like guffaws….

Heat and serve
in a crock