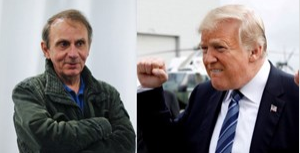 Those who have read Michel Houellebecq’s memorable Submission, which Douglas Murray reviewed for Quadrant upon its release, will know the author as a remarkably independent thinker — a brave one, too, given his novel tells how France’s elite learns to stop worrying and love the Islamic takeover of their former country. Writing critically of Islam is dangerous, which perhaps explains why feminists in Australia and elsewhere get themselves histrionically upset about tampon taxes but utter not an adverse word about burkas, the veiling of young girls, patriarchal oppression, arranged marriages and genital mutilation.

Houellebecq’s courage turns out to by multi-faceted, as he has just published an essay on Donald Trump (“a good president”) that offers offers a unique perspective on the US president’s virtues, albeit garnished with a full measure of rather more typical Gallic sneers. A taste from Harper‘s:

… Trump is pursuing and amplifying the policy of disengagement initiated by Obama; this is very good news for the rest of the world.

The Americans are getting off our backs.

The Americans are letting us exist.

The Americans have stopped trying to spread democracy to the four corners of the globe. Besides, what democracy? Voting every four years to elect a head of state—is that democracy? In my view, there’s one country in the world (one country, not two) that enjoys partially democratic institutions, and that country isn’t the United States of America; it’s Switzerland. A country otherwise notable for its laudable policy of neutrality.

The Americans are no longer prepared to die for the freedom of the press. Besides, what freedom of the press? Ever since I was twelve years old, I’ve watched the range of opinions permissible in the press steadily shrinking (I write this shortly after a new hunting expedition has been launched in France against the notoriously anti-liberal writer Éric Zemmour).

Houellebecq’s thoughts can be read in full via this link.

Shoes of the, er, ‘fisherperson’