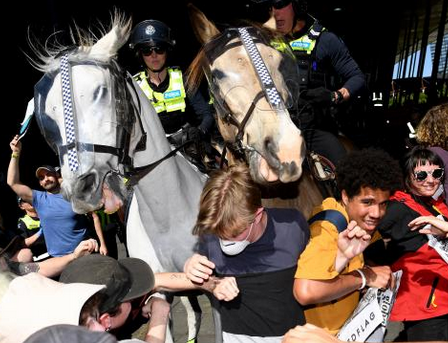 Not quite Charge of the Scots Greys but an improvement all the same.

Melbourne commuters once again have been kept from their business by climate protesters, who this morning blocked Clarendon Street, on the southern edge of the CBD, in an attempt to stop the International Mining and Resources Conference taking place at Jeff’s Shed.

This time, to their credit, Victoria Police refused to put up with such nonsense, brought in the horses and took some 40 people into custody. This was a pleasant change from the standard operating procedure of recent years, which has seen those being attacked billed for police protection. Were he allowed into the country, you could ask Milo Yiannopolous about that one.

The convening miners are a different matter. Invited by the government of Premier Dan Andrews to bring their convention dollars to the City on the Yarra, the police did their duty with a gusto that gladdened those stalled and fuming in gridlocked vehicles.

Here, though, there is something of a contradiction, as the protesters made their plans to sow havoc on the premises of another Melbourne institution that enjoys state government support. On the activists’ Facebook page there is this:

The International mining and resources conference will be held at the convention centre from 28-31 October. The conference will be attended by executives from all of the major fossil fuels firms as well many other mining corporations, responsible for land theft and genocide on top of their environmental vandalism.

It is our job to rebel. We want to gather as many people as possible to BLOCKADE the conference and stop it from happening. Globally people are standing up to climate change and those responsible for it. Now it is our turn to show what mass civil disobedience achieve.

According to a note attached to the above message, those plans were laid in RMIT Building 80, Level 9, Room 13.

Abet with one hand, arrest with the other.

Melbourne’s detractors like to joke that the muddy Yarra is the river that flows upside down. It’s not the only thing in this town that’s topsy turvy.