Hope for the CSIRO 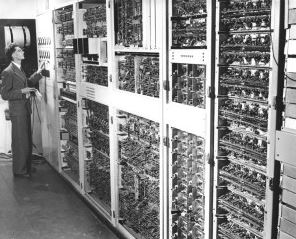 One day in the early Sixties, when I could have been no more than seven or eight, my father fired up the family’s Austin A30 and took me to “learn something interesting.” The destination was the CSIRO’s complex in South Melbourne, where we walked in unbidden off the street and Dad told the first person we encountered that he wanted some advice on inexpensive building techniques for the garage he intended to erect in the backyard. A boffin took us in charge and showed us a test bed for H-form girders made of Masonite stiffened with lengths of cheap wood. An enormous load had been hanging on them for several years and, as our guide noted with some pride, they had not sagged a micron. On the way home, Dad commented — and I remember this specifically — that he didn’t mind paying taxes to support an organisation as smart and effective as the CSIRO.

Dad built the garage as planned, supporting the roof with Masonite girders he hammered together in afternoon. As far as I know it is still standing. A few years ago Dad passed away at very nearly 90 years of age, death sparing him from further evidence that the practical, honest, innovative, can-do Australia of which he was very much a representative was not merely slipping away but being proactively interred. Then-PM Tony Abbott had just trimmed CSIRO funds, and the agency reacted in straight-arrow bureaucratic fashion by laying off “hard science” researchers while keeping on the payroll legions of climate-change worrywarts and apprentice Flanneries. In terms of pulling grants and gaining headlines, how could something so arcane as medical, polymer or deep-space research hope to hold a candle to the agency’s headline-grabbing catastropharians? Any dutiful bureaucrat would have made the same call, the getting of public monies being a far more pressing priority than the utility of the topics on which it is spent.

It was at that point I decided the CSIRO no longer served any useful purpose, that it was no better than a tax-gobbler and sinecure mill for mates — the ABC with white coats and clipboards, in effect. Back in the early Fifties, it had built one of the world’s first computers, pictured above. These days, such a machine would be used for climate modelling, which is where the money and travel vouchers are to be found.

I’m glad to say that my bleak view of the CSIRO has brightened somewhat in recent days, with news that the agency has a virus ready to wreak havoc, all going well, on the invasive carp that so diminish the pleasure I take in hunting trout. Perhaps I’m subject to a surfeit of optimism but maybe, just maybe, if the climate careerists could be winkled out, enough of the old CSIRO might still exist in obscure corners to serve as seed stock for a revived and revitalised organisation. Even allowing that the latest PM is a public warmist — surely, he is too smart to credit such tosh in private — one lives in hope.

For those interested in carp and getting value for their tax dollars, the CSIRO reports on its progress via the link below.

A multi-culti kind of lovin’