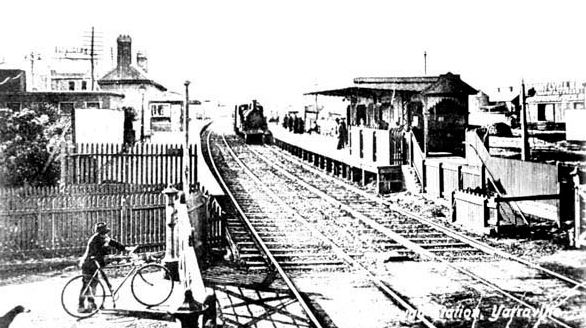 Before Malcolm Turnbull’s fast-train thought bubble goes ‘Pop!’ and vanishes it is worth considering our latest Prime Minister’s aside to the press gallery’s stenographers that, really, there is nothing terribly new about the notion of building rail lines and reaping the benefits of increased property values and the taxes that go with them. It’s a concept, he advised, that underwrote the rail boom of the nineteenth century and might work just as well today. While that summation cannot be faulted, it also ignored the shenanigans which so often influenced the placement of stations and would likely do so again. The Melbourne suburb of Yarraville makes a splendid example.

In 1859, a group of investors laid track from the city to Williamstown, prompting a group of speculators — Biers, Henningham & Co. — to announce the sale of building blocks to the south of Footscray. They threw a large party to announce their new subdivision, plying guests with drink and assurances that the rail line made their project a no-risk investment. Sadly, the railway entrepreneurs refused to cooperate, perhaps because they were not being guaranteed what they regarded as a just slice of the land speculators’ profits. Whatever the reason, they declined to build a station at Yarraville and sent their trains scooting straight from Footscray to Williamstown.

Yarraville’s future for the next 150 years was sealed: it became an industrial suburb best known for mean, cheap houses and the stink of knackeries and rendering plants. Stigma and smell lingered long after 1871, when the train finally stopped at the newly erected Yarraville station (shown above in the 1890s). As late as the 1940s, the football team was known as the Villains — a nom de guerre that neatly captured the rough and raffish tone of the suburb and the disregard of many residents for the finer points of law and order, particularly in regard to other people’s property.

What all this might have suggested to our Prime Minister is the inevitable problem a fast-train route will encounter when the time comes — if the the time comes — to select spots where his fast train will stop. Can’t you just imagine the jostling  and lobbying, the bribes and favours that will be brought to bear as the route is plotted.

“What, the seat of Eden-Monaro is in jeopardy? We’d best incorporate a stop or two there!”

Most of us know how these things work — although not, apparently, our Prime Minister.

Those interested in the history of Yarraville — now a gentrified locale, thanks not to rail but the ease with which motorists can reach it via the Westgate Bridge — should follow the link below.

News from all over