Here’s one for Ray Martin 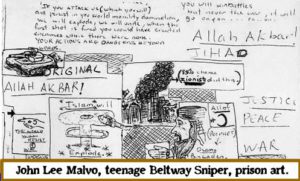 On Monday’s Q&A, academic Anne Aly, whose po-mo analyses of terrorism and terrorists are sampled in the post below, asserted that white supremacists have taken more lives in the US than extremist Muslims. As this was Q&A, where nostrums the Left find comforting are always allowed to stand unchallenged, this intriguing claim went un-sourced and unexamined.

Turns out that the claim is based on a New York Times summary of an analysis by a little known think tank, New America, which has been somewhat selective in nominating timeframes and motivations. Writing for Bloomberg, Megan McArdle points out:

“The most obvious thing to note is the choice of start date: Sept. 12, 2001. That neatly excludes an attack that would dwarf all those homegrown terror attacks by several orders of magnitude.”

What does it take to be tagged a right-wing extremist? McArdle offers many dubious examples, but this one is particularly instructive:

Add to the list of “not clear what he was thinking, but probably not domestic terrorism” Curtis Wade Holley, who set fire to his own home and then shot at the first responders. The timeline suggests he was upset because his ex-girlfriend finally had his utilities shut off and he was worried about being evicted or losing his car, something he’d vowed not to endure without a fight.

The evidence for him as a “right-wing attacker,” rather than just a paranoid and broke marijuana grower, seems to be that someone, possibly the ex-girlfriend, had called police to say that he had anti-government views and would shoot cops if they came to his place. Would a similar situation with someone known to be an Irish nationalist be an example that The Troubles had crossed the Atlantic to the United States?

And Muslim murderers, how difficult is it to be tagged thus?

Very difficult, apparently, as the survey’s authors pointedly neglected to include the so-called Beltway Snipers, who shot random strangers from a car whose boot had been converted into a shooter’s nest and the interior to a mobile library of incendiary Islamist literature. The artwork of the younger urban terrorist, John Lee Malvo, sits atop this post. Do notice the ‘Allah Akbars’ and ‘Jihad!’

Now that the ABC board has met, digested its lamingtons, accepted the latest per diems and deputised Ray Martin to examine how Q&A goes about its business, the ease with which guests like Ms Aly can present the highly dubious as concrete fact might attract his attention.

Might, but if he is inspired by the same degree of curiosity that animated his interview with Julia Gillard, probably not.

McArdle’s analysis can be read in full via the link below.

Never, ever
trust the Left