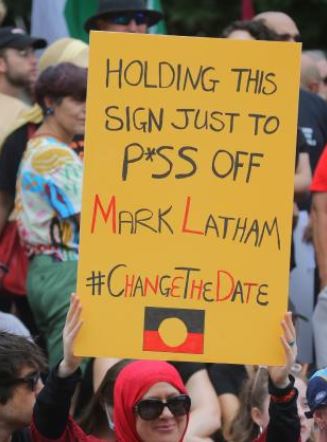 Personal hygiene’s obligations aren’t suspended on public holidays, so the shower’s splash made it difficult to catch every word of this morning’s exchange between 3AW’s Neil Mitchell and the radio station’s reporter-on-the-spot at the anti-Australia Day demonstration on the steps of Victoria’s Parliament.

The reporter, too, was having trouble catching every word, which led him admit he was unable to identify the speaker who assured the crowd, to cheers no less, that Australia “needs to be burned to the ground.”

When Mitchell asked what the crowd was like, the reporter assured him in the parlance of our times that it was “diverse”.

Diverse indeed: according to the broadcast update, diversity consists of radical leftists and some readily identified Aborigines, unlike the sort who went after Andrew Bolt, plus “Africans and transsexuals” and others (see the picture above). A Soutphommasane soup, in other words, and not varying in flavour one jot from the standard recipe for crowds that regularly assemble to foul traffic while denouncing everything from High Country logging to Margaret Court and the ready supply of electricity.

But not to worry, at the ABC they have given Stan Grant a token and put him on the roller-coaster that sees repeated slow ascents toward a definite conclusion, followed by a plunge into emotional incoherence. Grant tells us he is conflicted, having both convict and indigenous bloodlines, and goes on at quite some waffling length in a series of cliché-riddled one-sentence paragraphs. (A professional editor’s tip to readers: when a writer resorts to stream-of-consciousness pointillism and no definite picture emerges, he doesn’t have anything definite to say.)

Misquotation doesn’t help either. Grant finishes his essay with a few words from French philosopher and historian Ernest Renan, whom he quotes as saying “a nation is a ‘daily referendum’.”

Well, yes, Renan did say that. And, yes, if you’re looking for a pithy quote about the spirit of nationhood, that one will come up with a bit of quick googling. But the rest of the Renan essay, well it’s pity Grant didn’t read it or, if he did, that its message made no impression. Unlike Grant, Renan knew exactly what he wanted to say, especially about the importance of being prepared to forget ancestral grievances.

Yet the essence of a nation is that all individuals have many things in common, and also that they have forgotten many things. No French citizen knows whether he is a Burgundian, an Alan, a Taifale, or a Visigoth, yet every French citizen has to have forgotten the massacre of Saint Bartholomew, or the [Cathar] massacre that took place in the South in the thirteenth century.

So what makes a nation, beyond the flashcard wisdom to be drawn from the Deskside Book of Erudite and Impressive Quotations? This is how Renan puts it

… a soul, a spiritual principle. Two things, which are really one, constitute this soul and spiritual principle. One is in the past, the other, the present. One is the possession in common of a rich trove of memories; the other is actual consent, the desire to live together, the will to continue to value the undivided, shared heritage….To have had glorious moments in common in the past, a common will in the present, to have done great things together and to wish to do more, those are the essential conditions for a people.

It’s a pity Grant didn’t read a little further, as Quadrant Online readers can do by following this link or the one below to the full, translated text of Renan’s essay.

UPDATE: The ABC is a disgrace. Over the past few days its website has featured an online poll asking readers to nominate the date on which they think it most appropriate to celebrate Australia’s birthday. But guess what? Today’s date, January 26, wasn’t listed as an option. Further up the page another poll has been added, this one asking if the date should be changed. Even among ABC aficionados, preserving January 26 wins handily (43.5% want it changed; 50.9% want it retained)