Hang on to your wallets 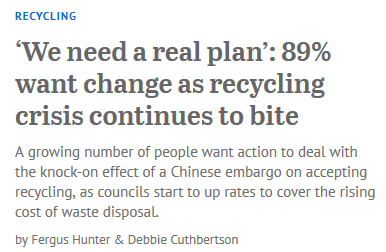 As with all cultists, green fanatics don’t like having their cherished nostrums ruptured. What, the world didn’t end as predicted? Not to worry, as true believers we’ll accept our gurus’ explanations and dutifully ready ourselves for doom’s next predicted arrival. Just such a re-positioning is evident this morning on the home page of the The Age (above), where a couple of little green reporters are fretting about the future of re-cycling now that China has stopped buying our rubbish. It’s a crisis, apparently, and armed with a survey orchestrated by the Australian Council of Recycling the story offers a solution of sorts. Can you guess what it might be? Why – Surprise! Surprise! – government intervention, which will apparently make for a sustainable “circular economy”.

The report’s opening paragraph bares pretty much everything you need to know about the green fog that swirls through modern newsrooms. That, and the absence of competent subeditors:

“The sudden realisation our conscientious separation of paper and plastic for recycling will not be enough to fend of (sic) a garbage crisis has Victorians demanding governments step in.”

Just what governments might do to make an unviable industry stand up, be productive and pay taxes – rather than soak up subsidies – is never adequately explained. The world only needs so many second-life flowerpots when all is said and done.

The obvious solution, the one that would come immediately to mind if Australia’s media and political classes boasted a collective IQ larger than a vegan’s waist measurement, is simplicity itself: dig some really big holes, line them to stop leeching, and chuck in everything no longer being sent to China. Stick a pipe in the top of the mound to collect the methane and Presto!, no more crisis. It’s not as if Australia lacks the space to install some whopping holes. Indeed, there are monsters ready and waiting to be filled.

Leigh Creek no longer produces evil coal, with the un-mined deposits being helpfully paved over to make sure nobody else digs the stuff up ever again. The LaTrobe Valley also is home to some monumental excavations where Mother Earth was raped for decades to keep the furnaces of cruel capitalism burning (and pensioners warm as well). Since coal will no longer be needed, as the green shills and their politicians all agree, there are likely sites in the Hunter Valley and Queensland as well.

Will it happen? Don’t be silly!

When an industry group facing the loss of its meal ticket hires Crosby Textor to establish that public sentiment is in its favour, it’s London-to-a-brick we’ll soon see governments intervening right and left. Count on your local council to jack up rates, state legislatures to kick in subsidies and the feds to triple them.

Yet there is a case for recycling – recycling for the benefit of young reporters and spendthrift politicians an investigative report by the New York Times’ John Tierney, who belled the green cat all of 22 years ago. Titled “Recycling Is Garbage” it can be read here.

If that is not enough, there is Judith Sloan addressing the same topic as recently as March this year. She writes:

A recent Danish study has concluded that, in fact, plastic shopping bags are much better for the environment than all the alternatives. Working on the assumption that plastic shopping bags are reused — as bin liners, for instance — the results of the government study show that regular cotton bags must be used 7100 times to make them better for the environment than plastic bags. Organic cotton bags need 20,000 reuses and paper needs 43 reuses — which is surely a big ask.

Judith’s column can be read via this link or the one below. Not that our leaders will pay any heed.