All this activism at the ABC can be confusing. The national broadcaster is, as we have been told often and loudly of late, a civilising influence and the very model of a considerate, sensitive, unbiased and exquisitely balanced organisation. Thus did Twitter see the ABC’s Hamish Macdonald respond to a well-wisher who expressed the view that social media is just the most wonderful thing. Macdonald has his doubts about that, as expressed in the tweet reproduced above.

Why, online thuggery is so bad ABC staffers might suffer adverse psychological consequences as a result of their exposure to such spleen.

One ABC staffer must not have got the memo about foul vitriol not being appreciated. Below, Jonathan Green hurls a bit of his own. 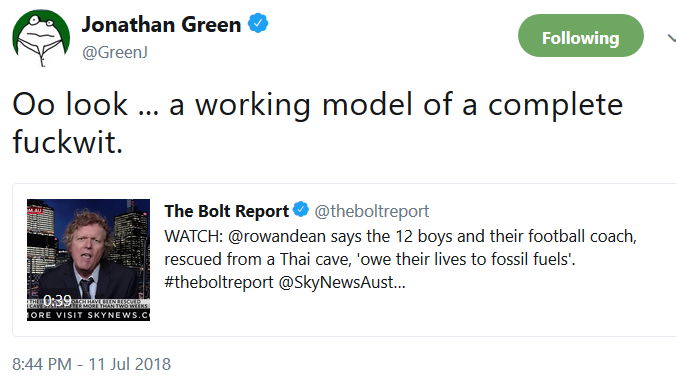 Green’s twitter feed, a fascinating and unfiltered window on the ABC mindset,  can be followed via this link or the one below.

‘The demise of
academic history’