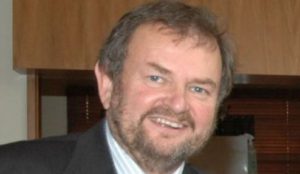 In today’s Fairfax press, former Canberra Times editor-turned-academic Crispin Hull (above) is depressed at the state of the world. Like most columns, columnists and content in the SMH and the Age, its diseased Melbourne sister, there is really no need to read the lamentation, as his dire fixations are entirely predictable: Trump, Brexit, global warming and non-left political parties which, inevitably, he describes as “hard right” etc etc. There is this, however:

…we can hope … those seeking to retain power will realise that fairness, openness and a determination to govern for all, not just their financial supporters, will lead to political success and a better world to live in.

Noble sentiments — and yet there was something about that sentence’s invocation of fairness and financial supporters which tickled the memory. Ah-ha, that’s it! Mr Hull’s past as course convener at the University of Canberra’s journalism school. As the Australian reported in April, 2012:

THE University of Canberra journalism school has awarded pass marks for assignments from overseas fee-paying students with poor English, overriding a tutor’s assessment that they should fail.

Crispin Hull, a former Canberra Times editor, and course convenor, advised a UC tutor to pass two students in their journalism assignments, despite her objections.

Hull wrote in an email that he took a “pragmatic view” about the poor English of overseas students, explaining it was a case of “grinning and bearing” it.

“They will return to China and never practise journalism in Australia,” he wrote.

“If these assignments had been produced by a native English speaker who might be let loose with a UC degree on the Australian journalism scene, I would fail them. But that this (sic) not the case.

“I think it best to give them a flat pass without breaking it up. Tell them their English expression needs a lot of further work. It is a question of grinning and bearing it.”

Responded Lynne Minion, the tutor Hull urged to pass the fee-payers and whose failing grdes were subsequently overturned.

“I believe to award a pass mark to undergraduate students that should fail really is a scandal … I think it is fundamental to the quality of the tertiary sector in Australia that this must be eradicated. That this happened at UC is an ethical lapse in those who pursued it and those who turned a blind eye.”

The Australian‘s archived report can be read via the link below.

Too important to delay

Their sort of free speech