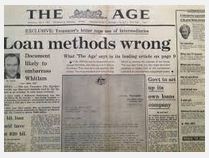 At his blog, Quadrant‘s Michael Connor takes a fresh look at the last days and final scandal of the Whitlam government, his perspective sharpened by a review of ASIO documents:

Declassified secret documents provide new evidence into the last Whitlam scandal, the one about the breakfast meeting with Iraqi officials at which half a million US dollars was, or was not, handed to the ALP leader. Gough Whitlam approved a dishonourable operation to seek funds from Iraq’s notorious Ba’ath party, was prepared to take the money, and buried the truth of what happened. Apologists excuse Whitlam’s behaviour and accept untested assurances that the money never arrived or was even stolen. Evidence in ASIO files that some of the actors in the drama were involved in an offshore ‘merchant bank’ suggests the cash hunting was not a naïve and irrational sideshow.

More than a magistrate