After global warming, what? 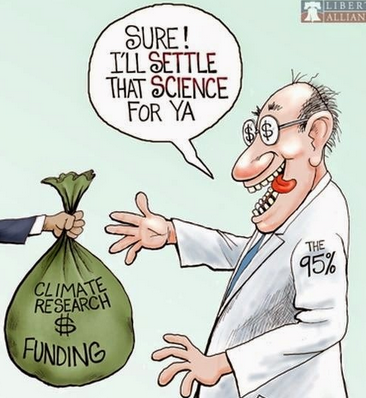 US cartoonist Branco follows the money.

After Tony Abbott called for Australia to abandon the Paris accords, quite a few of those doing nicely out of the climate scam lifted their snouts from the trough just long enough to snort that he is yesterday’s man and should leave them  to focus without distraction on the essential business of making electricity unaffordable. Their enablers and barrackers rounded up all the usual suspect talking points to further promulgate the message, as sycophants and toadies always will.

Yes, idiocracy’s chorus makes a sad spectacle — almost enough to see hope for mankind scuttled once and for all. Can a species taking its cues from such empty vessels ever hope to survive? Apparently so, if history is any indication. Catastrophic climate change, dams that will never fill, hot rocks technology to light the world and a rent-seeker’s wind turbine on every hill — these too shall pass, as Marian L. Tupy writes at Human Progress:

I cannot recall a time when one or other of these scares was not solemnly espoused by sober, distinguished and serious elites and hysterically echoed by the media. I cannot recall a time when I was not being urged by somebody that the world could only survive if it abandoned the foolish goal of economic growth. The fashionable reason for pessimism changed, but the pessimism was constant. In the 1960s the population explosion and global famine were top of the charts, in the 1970s the exhaustion of resources, in the 1980s acid rain, in the 1990s pandemics, in the 2000s global warming. One by one these scares came and (all but the last) went.

The good news, if Ms Tupy is correct, is that Tim Flannery et al will one day fade from public view. The bad news is that some other mortal peril to the planet will soon replace the climate scare, especially if there are generous grants to be trousered and expenses-paid trips to places with room service and nice sheets like, well, Paris for instance.

Ms Tuppy’s essay can be read in full via this link or the one below.

The truth about ‘Recognition’