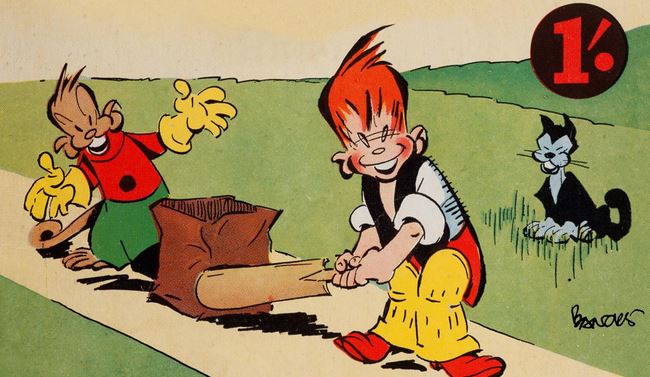 Years ago, too many, those who did honourable hackery on Sydney’s Sun-Herald were well aware of management’s strange desire to advise the world that Ginger Meggs could be found nowhere else. Even in the long-ago late Seventies this seemed a curious boast, as Ginger (above, in his original incarnation) had been showing his age for some time and seemed unlikely to attract readers younger than seventy.  Nevertheless, the enthusiasm was keen, with house ads to promote the strip and front-page plugs for his latest adventures with shanghais and marbles and the other, ancient amusements of children so long grown that many by then were in their graves. Comic strips were seen as huge circulation boosters and the Sun-Herald had pages and pages of them, from the the Phantom’s derring do to an acreage of allegedly humourous strips whose only common element was that none was actually funny. Still, perhaps it worked. The paper moved more than 800,000 copies every Sunday, was choked with ads and made Fairfax a weekly fortune. Today, of course, Mandrake, Marmaduke, Dagwood and The Born Loser would constitute a better and far smarter board than the one which is poised to make Melbourne and Sydney one-newspaper towns, but they are gone and all hope is lost.

Not that the tradition of groan-worthy humour on a Sunday morn is entirely dead, and for this the ABC should be praised, as it is at least fulfilling that oft-mentioned but seldom-observed role as a market-failure broadcaster.  Come nine o’clock and Insiders takes to the air, its guests and compere as exclusive a bunch of characters as ever giggled and simpered in Ginger Meggs’ cubbyhouse. This morning it was David Marr, in caricature as always, and the AFR‘s Phil Coorey, plus host Barrie Cassidy and Mrs Woolcock from The Australian. Like the comics of old, the humour was mostly accidental, but there was at least one good laugh to be had all the same. It came when Peta Credlin’s name was raised. “She can’t be a commentator,” they all agreed, given her immediate past. Once you’ve eaten worms and passed the club initiation test to get into Ginger Cassidy’s cubbyhouse, you get to decide who else “can be a commentator”. Membership has its privileges.

What prompted this rush to bolt the door was Credlin’s off-hand mention that it is Malcolm Turnbull’s misfortune to be widely seen as “Mr Harbourside Mansion”. This is true, of course, but an iron rule of the Cassidy Cubbyhouse says objective reality can only be referenced when it matches the preferred perceptions and talking points of those inside. So Credlin was a nasty piece of spiteful work for uttering something — or anything, presumably — about the man who knifed her boss. Having settled that, the quartet moved on to the next item of the day’s agenda. Was it asylum seekers, gay marriage, the scandal of Canberra favouring the rich over government-funded nannies? Or could it have been the pressing matter of gender-fluid lavatory liberation? It’s hard to be definite about the sequence in which collegial accord unfolded, as Insiders‘ nodding heads tend to make everything a bit of a blur.

That Credlin “can’t be a commentator” because she worked for a PM was zany stuff. If true, by what right does Barrie Cassidy occupy his Sunday corner of the taxpayers’ TV screen? Yes, it is many years since he served as Bob Hawke’s spinner, but do partisan sympathies really fade with time? That some viewers might suspect they don’t and can’t would have prompted a better-run ABC to shun the possibility it might be seen as biased, perhaps by relegating Cassidy to a more limited role. It could have done the same with Kerry O’Brien, who spun lines for Saint Gough, but that work history also was never considered. Labor veterans “can be commentators” until the cows come home, according to Cubbyhouse rules,  but the views of a Liberal PM’s ex-chief of staff are suspect and unwelcome. Well now you know.

One thing many viewers wouldn’t have known, as it it went unmentioned, is Mrs Woolcock’s conjugal connection with our latest PM via hubby Vincent, one of Mr Turnbull’s first hires. But as she is a member in good standing of Cubbyhouse Cassidy, that family link is no barrier to a comfy seat in the commentary collective. Unlike Peta Credlin, she can comment all she likes. The fact that Niki Woolcock’s recent book peddled entirely unchecked and unsubstantiated whispers about the woman who is once again the target of her criticism went unmentioned, as did her enmity for Abbott. Cubbyhouse rules, remember.

Say what you like about the ABC, but there is one tradition the national broadcaster seems sworn to uphold: the best fare of a Sunday morning must always be presented by a cast of caricatures. Ginger Meggs, call your agent.

If you missed Insiders, it can be viewed via the link below.