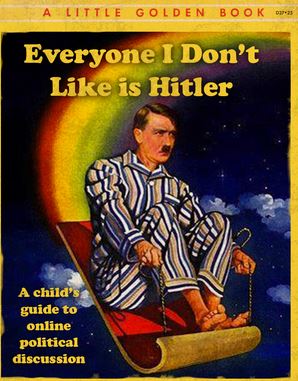 It must be very distracting, waiting for your employer on the other side of the world to cease publication of the newspaper that pays your bills. Do I have pals at the ABC who can manufacture a job for me? If Fairfax HQ doesn’t pay my cable-TV subscription, how will I re-write the anti-GOP talking points they spout on CNN and MSNBC? If they order me back to Australia, will I have to share a cubicle with Elizabeth Farrelly?

With one anxiety and another it can be difficult to remember if it is OK to liken people you don’t like to Adolf Hitler. Today, apparently, it’s a no-no.

At best it’s careless to call anyone a Nazi.

But just before the US presidential election, the “carelessness” of likening Donald Trump to the Austrian corporal didn’t strike McGeough as careless in the least. At Fairfax consistent inconsistency and many other journalistic travesties are “quality journalism“:

Hitler loved big rallies and shaped his speeches to suit the tastes of his lower middle class, conservative and nationalist followers – they would be Trump’s non-college-educated white voters. Hitler would manipulate the crowds’ fears and resentments before offering himself as the visionary leader who would restore law and order and ‘lead Germany to a new era of national greatness.’

“Donald Trump and Adolf Hitler
Have More in Common Than Slogans”

Those curious to know if McGeough also believes Trump has but a single testicle should follow the link below. Unless desperate for a laugh, most will probably wish to avoid it.